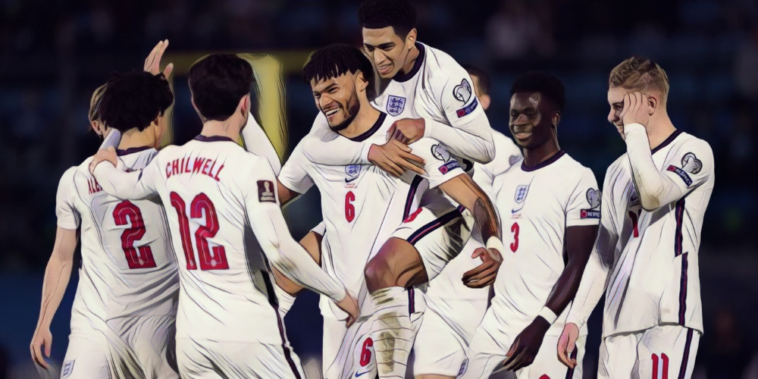 Gareth Southgate has hailed England’s hunger after the Three Lions thrashed San Marino 10-0 to seal qualification to the 2022 World Cup in Qatar.

England assured their status as group winners with a rout of FIFA’s lowest-ranked international nation, scoring double figures for the first time since 1964 with Harry Kane netting four times in the first half alone.

Kane moved joint-third with Gary Lineker amongst England’s all-time leading scorers, whilst Emile Smith Rowe marked his first senior start with a goal in a pleasing and professional performance from Southgate’s side.

Harry Maguire, Tyrone Mings, Tammy Abraham and Bukayo Saka were also on the scoresheet, in addition to an own goal from Filippo Fabbri.

Southgate was delighted with the ruthless manner of his side’s win with England finishing their qualification with a huge 38 goals from 10 fixtures, a record for the Three Lions in qualification for a major tournament.

“I like the fact we have a mentality where we don’t take our foot off the gas, and whatever the challenge the players respond to it,” the England manager said. “We have broken a few records over the last few years. It breeds hunger and desire. They were all queuing up to score towards the end. It was probably good to have younger players on tonight.”

Kane’s four-goal haul saw the England captain set a number of personal landmarks, becoming the first player in 64 years to score consecutive hat-tricks for the Three Lions, having netted a treble against Albania on Friday evening.

The 28-year-old also became the first England player since Ian Wright – also against San Marino – to score four times in a fixture, whilst his 16 goals scored in 2021 is a new national record for a calendar year.

Kane also moved level with Gary Lineker on 48 goals for England and is just five goals from levelling Wayne Rooney’s all-time record, with Southgate admitting the forward could have got even closer had he not been substituted with half an hour remaining.

“If we left him another half an hour he might have got it,” Southgate said. “I said to him we would have had Wayne Rooney’s family on the phone telling us to get him off.”