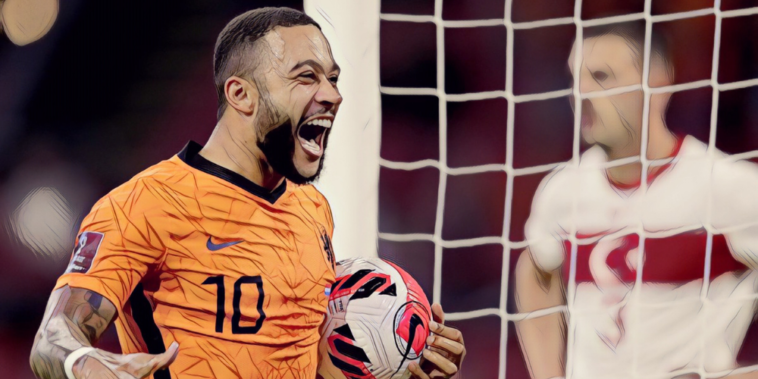 Memphis Depay continued his excellent goalscoring record for the Netherlands national side with a double in World Cup qualification last weekend, scoring twice as the Oranje drew 2-2 with Montenegro.

Following his latest landmark, we’ve ranked the six leading scorers in the history of the Netherlands national side.

Memphis’ brace against Montenegro saw the forward move to 37 goals at international level, moving him to joint-fourth in the nation’a list of all-time leading scorers.

His goals were his his 13th and 14th scored in World Cup qualification fixtures, eclipsing both Robin van Persie and Ruud van Nistelrooy as the all-time top scorer for the Dutch in qualification for the tournament.

Memphis has scored nine of those goals in qualification for the 2022 tournament alone – including a first international hat-trick against Turkey in September – part of a staggering recent record of 16 goals from just 15 games for the Netherlands in 2021.

Leading in both goals AND assists in Europe.

Despite his prolific exploits, the Netherlands’ squandering of a two-goal lead against Montenegro leaves the Dutch with work to do to secure qualification, facing Norway in their final qualifier on Tuesday.

Defeat could see both Turkey and the Norwegians overhaul Louis van Gaal’s side to secure qualification to Qatar.

Arjen Robben is level with Memphis Depay on 37 goals for the national side, having established himself as one of the great Dutch footballers of his generation during a lengthy international career.

Robben earned 97 caps across an international career that spanned from 2003 to 2017, forming part of the side that finished as runners-up during the 2010 World Cup in South Africa, before a third-place finish in Brazil four years later.

The latter of those saw Robben star as one of the tournament’s finest talents, winning the World Cup’s Bronze Ball after scoring three times during the Netherlands’ run to the semi-finals, including a brace in a 5-1 thrashing of world champions Spain.

He was named as captain of the side from 2015, before retiring from international football following the nation’s unsuccessful bid to reach the 2018 World Cup.

The third footballer with 37 goals for the Dutch national side, Dennis Bergkamp eclipsed the landmark of Faas Wilkes to become his country’s leading scorer at that time in 1998.

Bergkamp made his debut for the national side in 1990 and scored his first goal against Greece two months after his first senior appearance, later impressing despite a disappointing Dutch performance at Euro 1992.

Dennis Bergkamp scored this memorable goal against #ARG in the @FIFAWorldCup. pic.twitter.com/9TuCNsp7mG

He scored across four major tournaments for the Netherlands, including one of the World Cup’s most iconic goals with a stunning last-minute quarter-final winner against Argentina at France ’98.

Patrick Kluivert surpassed Bergkamp as the Netherlands’ all-time leading scorer, having partnered the former Arsenal forward during their time together in the national side.

Kluivert burst onto the scene as part of Ajax’s famed Champions League-winning side of the mid-nineties, becoming the youngest ever final goalscorer with a late winner against AC Milan in 1995.

The forward enjoyed a prolific period with Ajax before spells at the likes of AC Milan and Barcelona, winning the La Liga title with the latter in 1998/99.

Kluivert scored 40 goals in just 79 appearances for the Dutch, including finishing as the tournament’s leading scorer as Holland co-hosted the 2000 European Championship.

He held the title as the Netherlands’ all-time leading scorer from 2003 until 2013.

Perhaps an underrated presence amongst the long lineage of Dutch goalscoring greats, Klaas-Jan Huntelaar plundered 42 goals in just 76 appearances for the Netherlands.

Having set a new goalscoring record for the Dutch u21 side with 18 goals from 23 games, he made an immediate impact at senior level with two goals and two assists on his debut in a 4-0 win against Ireland.

Despite spending much of his international career as an alternative to Robin van Persie in attack, Huntelaar amassed a formidable goalscoring record including finishing as the top goalscorer in qualifying for Euro 2012 with 12 goals, one short of the all-time qualification record now jointly-held by Northern Ireland’s David Healy’s and Poland’s Robert Lewandowski.

Huntelaar also netted a memorable goal during the Netherlands’ run to the World Cup semi-finals in 2014, coming off the bench to score a stoppage-time spot-kick as the Dutch dramatically came from behind to beat Mexico in the last 16.

Robin van Persie holds the record for the most goals scored for the Netherlands at international level, scoring 50 goals from 102 caps in the colours of the Oranje.

Van Persie began his career as a wide forward before evolving into one of the best centre-forwards of his generation, enjoying a prolific Premier League career in the colours of Arsenal and Manchester United.

He scored his first goal in a 4-0 win over Finland during qualification for the 2006 World Cup and scored four goals in the Netherlands’ record-breaking 11-0 win against San Marino in 2011.

Van Persie eclipsed the all-time landmark set by Kluivert with a hat-trick against Hungary in October 2013, whilst his brilliant diving header against Spain – part of four goals scored during Holland’s run to the semi-finals of the 2014 World Cup – saw him nominated for FIFA’s Puskás Award.