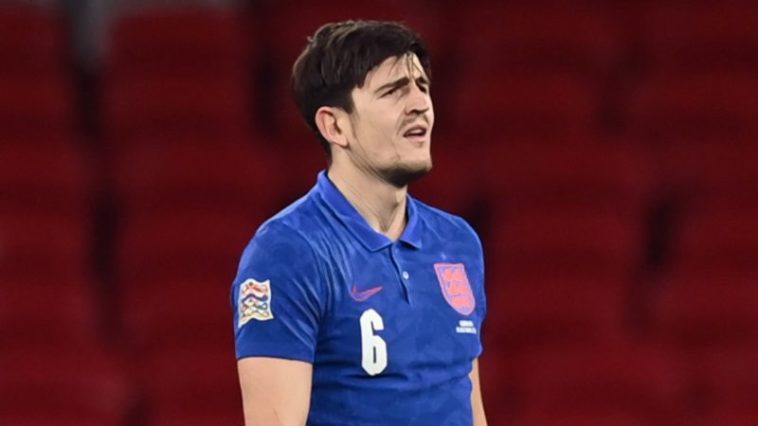 Manchester United captain Maguire continued his recent woes with a nightmare performance for the national side as he was sent off in the first half, first picking up an early yellow card for a reckless challenge on Yussuf Poulsen before crashing into Kasper Dolberg following a poor first touch.

England’s night only worsened as Christian Eriksen put Denmark ahead from the penalty spot to mark his 100th international appearance with a goal, whilst England received two red cards for the first time in their history after Reece James was sent off for confronting the referee at the full-time whistle.

The result means the Three Lions dropped to third in the group with only the winners progressing to the finals next year, though Southgate refused to blame Maguire and suggested the centre-back may be struggling to deal with an increase in profile since his world-record move to Old Trafford last summer.

“The first yellow was a challenge he didn’t need to make and it put him on edge,” Southgate said at his post match press conference. “The second one is an interception and it just takes him. He’s a great player and massive part of what we do. He’s got a lot of sticks thrown his way, he’s got our full support. He just needs the reassurance that we have total belief in him.

“He’s had to deal with all sorts and from some people who should know better. When you’re a bit older you can rationalise it and move forward from it. He’s experiencing it from the first time really, he’s had setbacks but his profile has changed in the last couple of years because of the club he plays for and the success he’s had with us. He’s got to keep going and the tide will turn.”

Maguire’s poor start to the season has come following his arrest in Greece over the summer and the player seems to be struggling with the increased attention, though Southgate refused to comment on who he was referring to in terms of the defender’s critics.

“No, I don’t want to elaborate on that. He’s in a difficult period and in these times you learn a lot about yourself and you learn who is there for you in these difficult times.

“He will come through it and be a stronger man for it. Knowing Harry as I do, he will want to play football. The best place for him is on the pitch. Everybody has a view on Harry at the moment, but that’s the life of a top player.”