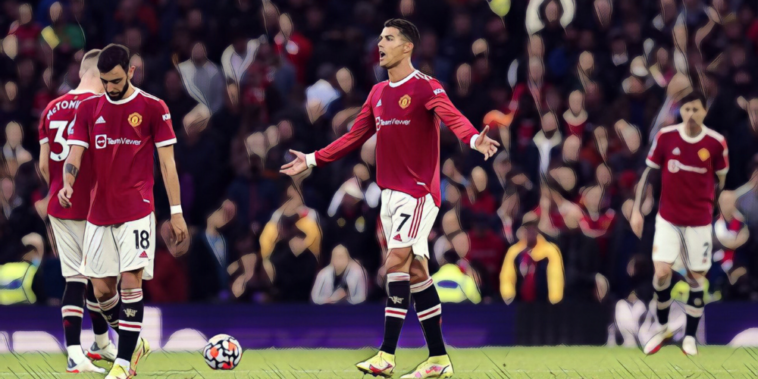 Manchester United fans were left watching their side with disbelief against Liverpool this weekend, following a disastrous defensive display from Ole Gunnar Solskjaer’s side at Old Trafford.

Liverpool ran riot to secure a comprehensive victory and their biggest ever away win at Manchester United, scoring four times before half-time on their way to an emphatic 5-0 win that has piled the pressure on Solskjaer’s position.

Following the embarrassing defeat to Liverpool we’ve decided to look at some of United’s worst defensive performances.

Here are the times United have conceded five or more goals in the Premier League era:

The previous season had seen Newcastle surrender the title to Manchester United in incredible circumstances as the Magpies blew a 12-point lead to finish as runners-up to Sir Alex Ferguson’s side, with this October meeting between the two teams billed as a clash between the challengers once more.

Newcastle had strengthened in the off-season with the world-record signing of Alan Shearer from Blackburn and headed into the clash top of the division following a six-game winning run, the champions in close pursuit after making an unbeaten start to the campaign.

What unfolded was a huge statement of intent from the Magpies in arguably the zenith of their mid-nineties heyday as the league’s great entertainers, thrashing United 5-0 at St James’ Park in a ruthless display of attacking football.

Darren Peacock opened the scoring with a header that was adjudged to have just crossed the line, before a blockbuster effort from David Ginola doubled the home side’s advantage before the break.

Shearer then provided a perfect cross for strike partner Les Ferdinand to head home a third before making it four himself from close range, turning home a rebound after a fine double save from Peter Schmeichel.

Philippe Albert sealed the win with one of Newcastle’s most iconic Premier League goals, putting the gloss on the result with a sumptuous chip that left Schmeichel stranded in no man’s land.

One week later and United’s defensive strength was questioned once more after shipping six at Southampton, though their calamitous showing was justified in bizarre circumstances by Ferguson, who blamed the club’s grey shirts for their poor performance.

Ferguson claimed his players could not see each other properly in their grey away kit, leading to a memorable change of shirts at half-time as the Red Devils returned to the field in blue colours after the interval.

The change came after United – who had Roy Keane sent off after just 20 minutes – found themselves 3-1 down at the break, goals from Eyal Berkovic, Matt Le Tissier and Egil Ostenstad putting the Saints firmly in control at The Dell.

Unsurprisingly, the colour of their shirts proved not to be United’s only downfall as they shipped another three goals after the break, Berkovic and Ostenstad netting their second goals of the game before a late Phil Neville own goal compounded the visitor’s misery.

It finished 6-3 to Southampton, the first time the Red Devils had conceded six in the Premier League era.

Manchester United headed to Chelsea in October 1999 as the reigning European champions following their historic treble-winning season, whilst their defence of the title had begun in impressive fashion with a nine-game unbeaten run including victories over Arsenal, Newcastle and Liverpool.

Chelsea had finished just four points behind the champions the previous campaign and were quietly improving under the guidance of Gianluca Vialli, making their presence known with this thrashing of Sir Alex Ferguson’s side at Stamford Bridge.

Gus Poyet headed Chelsea ahead within the first minute of the clash, before Chris Sutton doubled the west London side’s advantage with just 16 minutes played.

Things soon got worse for United as Nicky Butt was sent off five minutes later for retaliating to Dennis Wise’s wind-up antics, placing a firm knee into the midfielder’s rib cage following a tangle between the two players.

Poyet grabbed his second before a Henning Berg own goal made it 4-0 before the hour mark, a late goal from youngster Jody Morris sealing an emphatic victory for Chelsea in the capital.

It would be over a decade before Manchester United next conceded five times in a Premier League fixture and it remains arguably the worst result in their modern history, the ‘noisy neighbours’ roaring loudly to claim an unforgettable derby victory at Old Trafford.

Roberto Mancini’s side thrashed the champions in ruthless fashion to hand the Red Devils their biggest home defeat in 56 years, in an emphatic statement that billionaire-backed City were here to challenge for the game’s biggest prizes.

Mario Balotelli scored either side of the break just days after making headlines for a firework incident at his home, revealing his now iconic ‘Why Always Me?’ t-shirt in a stoney-faced celebration.

Edin Dzeko also netted a brace with further goals from Sergio Aguero and David Silva, inflicting a painful defeat on United who had Jonny Evans sent off early in the second half.

Sir Alex Ferguson described the defeat as his ‘worst ever day’ at the club and it is not difficult to see why, an embarrassing result and one that remains unforgettable in the history of the Mancunian rivalry.

The final game of Sir Alex Ferguson’s illustrious career as Manchester United manager delivered a thriller at The Hawthorns, his side playing out a pulsating contest against West Bromwich Albion.

It’s fair to say the Scot may have felt he’d seen it all during a 26-year reign as United boss, but even he must have been surprised at what unfolded as the two club’s shared 10 goals in a thrilling 5-5 final day draw.

The visitors raced into a three-goal lead through strikes from Shinji Kagawa, a Jonas Olsson own goal and Alexander Buttner, before James Morrison and Romelu Lukaku brought West Brom back into the contest.

United’s three-goal advantage was restored as Javier Hernandez and Robin van Persie seemingly put the result beyond doubt, only for the Baggies to fight back once more in stunning style.

Ferguson’s side imploded to concede three goals in just five minutes late on as West Brom snatched the unlikeliest of draws, loanee Lukaku finishing the clash with a hat-trick on his final appearance before returning to Chelsea.

Having seen the David Moyes’ era end in ill-fated fashion, the Red Devils appointed Louis van Gaal as manager ahead of the 2014/15 season and broke the British transfer-record to sign Angel Di Maria from Real Madrid.

Di Maria scored a sublime chip as the visitors raced into a two-goal led at the King Power Stadium, a cushion that was restored by Ander Herrera after Leonardo Ulloa’s header had reduced the deficit.

Having been seemingly cruising towards three points, however, Van Gaal’s side were stunned following a memorable fightback from Leicester as David Nugent’s penalty and Esteban Cambiasso’s strike restored parity.

With the momentum now with the Foxes, goals from Jamie Vardy and an Ulloa penalty completed the comeback as the Red Devils succumbed to a second-half capitulation.

Sir Alex Ferguson’s infamous quip seemed like a world away following a humiliating home defeat to Spurs in October 2020, a dreadful performance from a Manchester United side a far cry from the title-winning teams of the Scot’s reign.

Ole Gunnar Solskjaer has attempted to reinstall the club’s traditions of that time, but his transitionl side remain once capable of woeful performances unbefitting of the most successful side of the Premier League era.

Bruno Fernandes’ penalty after two minutes proved a false dawn as a calamitous defensive display saw Spurs bounce back to lead after just seven minutes, Harry Maguire at fault for both goals as the world’s most expensive defender endured an afternoon to forget.

It was 4-1 to the North London side before the break as Spurs took advantage of Anthony Martial’s red card for an ill-advised push in Erik Lamela’s face, the result made all the more emphatic through second-half goals from Serge Aurier and Harry Kane.

Liverpool inflicted a second home humiliation on United just over a year after their humbling to Spurs, inflicting a defeat which has increased the pressure on Ole Gunnar Solskjaer to almost unbearable levels.

Jurgen Klopp’s side opened the scoring after just five minutes through Naby Keita and were relentless in their pursuit of further goals, Diogo Jota doubling the advantage inside the opening quarter of an hour.

Liverpool continued to cut apart a Red Devils side that could not live with their attacking display, with Mohamed Salah continuing his scintillating recent form with a clinical hat-trick to make it five goals for the visitors.

The Egyptian became the first opposing player to score a Premier League hat-trick at Old Trafford, whilst he is just the second Liverpool player to ever do so after Fred Howe in 1936.

Tentative hopes of a title challenge had been raised by United’s pre-season recruitment, but this was a clash in which the gulf between Solskjaer’s side and the Premier League’s best was vividly apparent.