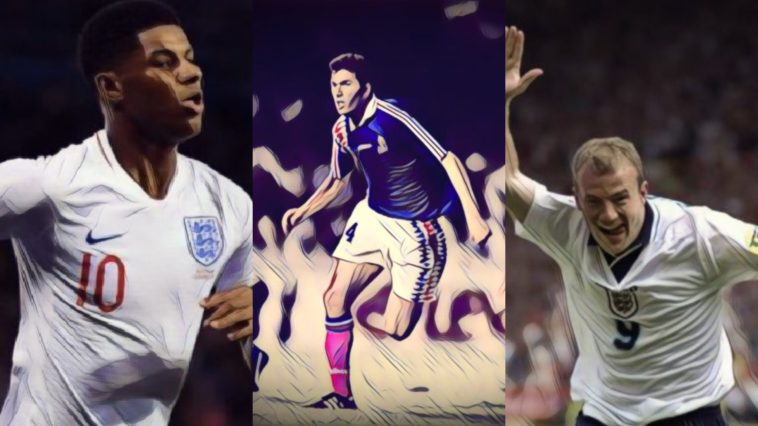 Representing your country should be one of the greatest honours for any football player, or at least it used to be.

The waning importance of international football has perhaps diluted the meaning of caps, but for many it is still a huge honour, including the newly capped Dominic Calvert-Lewin.

The Everton striker had a perfect debut this past week when he headed home during a 3-0 win over Wales. He told Sky Sports of his pride in playing for England and it’s clear that the Yorkshireman was emotional about it.

Calvert-Lewin wasn’t the first layer to have a dream debut, but how does his first appearance compare with other remarkable openers in the modern era?

Some of the best international football debuts of the past thirty years:

When Marcus Rashford burst onto the scene for Manchester United in 2016, the striker had this knack of scoring on every debut imaginable. He scored a brace in his first senior start, a Europa League match against Midtjylland, before getting another two against Arsenal on his Premier League debut just three days later.

He also scored in his first Manchester derby, League Cup and Champions League matches, so it would stand to reason that the youngster would score on his international debut as well – within three minutes, no less.

Starting against Australia in a Euro 2016 warm-up game, Rashford found the net via a low driven volley, becoming the youngest England international to score on his debut and third youngest overall. He went to that summer’s tournament just four months after making his debut.

Following the ignominy of not qualifying for the 1994 Men’s World Cup, the French national team embarked on their quest for redemption under new manager Aimé Jacquet.

It got off to a bad start in August of that year, as Les Bleus went 2-0 down to Czech Republic in a friendly despite boasting stars such as David Ginola, Eric Cantona, Laurent Blanc and Marcel Desailly.

The 22-year-old playmaker was called from the bench to salvage something from a dire situation. He went above and beyond when he came on for Corentin Martins, beating a man with one of his classy stepovers, before rifling the ball into the goal from 25 yards out.

Not yet finished, the Bordeaux midfielder headed home from a corner moments later, snatching a 2-2 draw for France. It was a taster of what was to come from the future World Cup winner.

The best playmakers of 1990’s Serie A: Zidane, Baggio, and more

Speaking of France, it against that very nation that Alan Shearer made an emphatic first appearance for the Three Lions in 1992.

The Southampton striker, picked by Graham Taylor in a friendly that was to prepare England for Euro 92, finished superbly to score on his debut, swivelling on the spot to catch the goalkeeper cold.

A Premier League title winner with Blackburn Rovers in 1994, Shearer was involved in the buildup for the second goal too. Crossing in from the right, Nigel Clough’s volley was parried by the goalkeeper into the path of Gary Lineker to score his 47th international goal.

The future Newcastle United legend would go on to win 63 England caps, scoring 30 goals in the process.

Germany’s all-time record goalscorer, Miroslav Klose has scored a lot of important goals in his time. But it’s his first one for the national team that deserves mentioning here.

In March 2001, the German marksman was brought on with 17 minutes left on the clock in a World Cup qualifier against Albania, with whom they were drawing 1-1 in Leverkusen.

Not beating such minnows on home soil would have been a disaster, so manager Rudi Voller sent on Klose for his first appearance. In the 87th minute the Kaiserslautern striker scored the winner with a diving header to help get one step closer to Korea and Japan.

“It doesn’t get better than this,” he said after the game, not realising the international career that lay ahead of him.

Unlike the other players on this list, Eidur Gudjohnsen did not score on his international debut. But he did something even more remarkable: he came on as a substitute for his own father.

The 17-year-old replaced 34-year-old Arnór in the second-half of a game against Estonia in Tallinn, sealing their place in the history books forevermore. However, the pair later expressed bitterness about not playing together for the national team.

The president of the Icelandic football association apparently told the coach not to have them on the pitch at the same time, in order to save that momentous occasion for a home game. But injury meant Eidur didn’t win another cap until 1999, by which time Arnór was retired.

20 years after making his bow the Chelsea and Barcelona striker played for Iceland at Euro 2016, completing a lifelong ambition to round out an amazing career.

See Also: The Premier League’s worst away and third kits in 2020/21