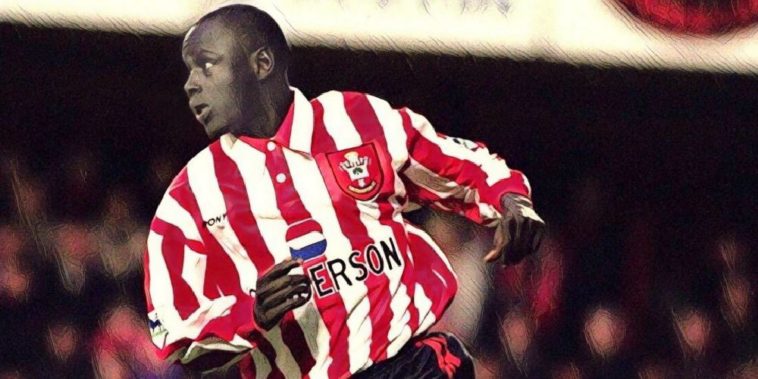 It’s one of the most memorable stories in Premier League history and Ali Dia will forever be immortalised as English football’s greatest con man, but Graeme Souness has now revealed the truth behind the iconic Southampton substitute.

The narrative behind the story is that Souness – then manager on the South Coast – received a call from an imposter claiming to be Ballon d’Or winner George Weah, advising the Southampton boss to sign his talented cousin.

Dia, having been handed a trial, would then be given his opportunity in a league fixture against Leeds in 1996, coming on as a substitute for Saints legend Matt Le Tissier before being hauled off just 53 minutes later after looking evidently out of his depth – his only appearance for the club.

The widely acknowledged story is that Souness was bluffed in incredible fashion by Dia and his ‘agent’, though recalling the tale alongside the subbed Le Tissier, the Scot admits he knew the forward was ‘hopeless’ well before his memorable introduction to England’s top tier.

“It’s a great story and it’s a funny story but it’s not quite what you read or hear,” Souness said on Sky Sports The Football Show.

“So someone gets a call at the football club, George Weah’s cousin or nephew was in England and looking to join a football club. He wanted a trial.

“Well, Matt will know at that time we had such a small squad, we were having trialists in all the time. In fact, actually we got Eyal Berkovic in. He came for a week in pre-season, we ended up signing him and he became a fabulous player at Southampton.

“But we didn’t have enough players to have an eight-a-side, so we kept him for a week. As the week goes on we have more and more people getting injured, so we’re now looking – I think it was Leeds United we were playing on the Saturday – and Matt was our only fit forward.

“Now it’s all Matt’s fault because Matt lasted about 20 minutes, and I’m looking down the bench thinking, ‘what can we do?’. I’ve got centre-halves and right-backs and left-backs, and we’ve got this guy on the bench. Terry Cooper had said during the week, ‘you’re gonna have to have that fool on the bench, we just don’t have any other strikers’.

“So we ended up putting him on the bench, worst-case scenario he’s going to go on and run around and be a pest. So Matt gets injured, he comes off, [Dia] goes on, he was everywhere the ball had just been, it’s as if he’d never been on a full pitch before.

“But the story is that we were kidded and conned by people. No-one was kidded. No-one was conned. We made the decision within the first five minutes of seeing him in a game that he was not very good. But it’s a good story. It’s all Matt’s fault for getting injured.”

Le Tissier also recalled his first impressions of the notorious Dia, saying that he was so bad that he thought the forward was a competition winner while admitting that he didn’t inform Souness of a thigh problem picked up in training.

“I had the same impression as Graeme. I didn’t particularly think that he was quite…I actually thought he’d won a competition to come and train with us, if I’m honest,” Le Tissier added.

“And then when he turned up on the Saturday and he sat in the changing room, I’m thinking, ‘wow, that’s a pretty good competition, he’s gonna get to be in the team talk and everything’.

“I pulled my thigh muscle. I’d actually…I don’t think I’ve ever told Graeme this, but I was taking some penalties after training on the Friday, and I just felt a little tweak in my thigh muscle just as I took my last penalty, and I thought, ‘well, that didn’t seem quite right’.

“But I thought, you know, it’s just a little bit, I’ll be alright. It’s not like I have to sprint or anything in a game. I can get away with it. And then about 20 minutes into the game I just went to whip a ball in with my right foot and I over-extended a little bit and just tore the thigh muscle.

“So yeah, it was my fault and I was the player that was substituted for possibly the worst player ever to play in the Premier League.”