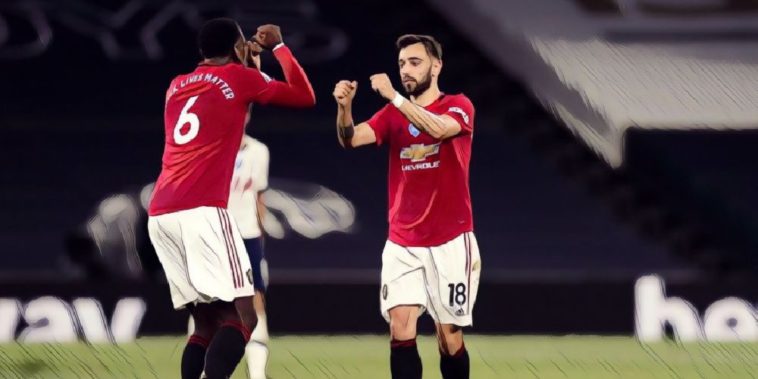 Manchester United boss Ole Gunnar Solskjaer reckons his side did enough to win their clash with fellow top four hopefuls Spurs tonight, the two sides playing out a reasonably entertaining 1-1 draw at the Tottenham Hotspur Stadium.

Like many of this first batch of games since the restart, both sides started tentatively, with the encounter resembling a pre-season friendly.

However, it soon sprang into life on 20 minutes when Marcus Rashford’s snapshot from 12 yards out forced Spurs keeper Hugo Lloris into a fine reaction save.

The French international was once again called into action to deny a sharp looking Bruno Fernandes and it looked like Solskjaer’s men were starting to find their pre-pandemic rhythm.

It would be Spurs who took the lead on 27 minutes though, January signing Steven Bergwijn picking the ball up 40 yards from goal and breezing past a lethargic looking Harry Maguire before firing home past United ‘keeper David Gea. Unfortunately for the Spain international, it would be latest in a string of high-profile errors this season, with replays showing that the 29-year-old really should have done a lot better with the Dutchman’s shot.

The sides went in at the break level and as the second half started Spurs looked happy to sit back and try hit a United side struggling for creativity on the break.

Manchester United boss Solskjaer soon looked to his bench, introducing Paul Pogba and Mason Greenwood, with the change resulting in an upping of the tempo from the away side.

Anthony Martial soon forced countryman Lloris into a superb save, before some tidy footwork from Pogba won his side a penalty after a clumsy challenge from Spurs defender Eric Dier.

Paul Pogba completed 17 out of his 18 passes against Spurs, including 3/3 long balls, and was successful with both take-on attempts.

Only 1/18 passes was backwards. ⏭ pic.twitter.com/e9BznaSV1z

Another January signing, Red Devils playmaker Fernandes stepped up to stroke home the spot-kick on 81 minutes and set the game up for an exciting finish.

Both teams pushed on in search of a winner and Fernandes thought he had the chance to score a second penalty, referee Jon Moss ruling that the Portuguese midfielder had been fouled in the area, with Dier once again the culprit. However, replays clearly showed there had been no contact and VAR overruled the decision and both sides had to settle for a point.

Speaking after the game Solskjaer was upbeat about the nature of his side’s performance.

“Good performance, disappointed with the one point. I think we deserved more. I think the performance deserved three points,” the Norweigan told BBC Five Live.

“We started off slow, dominated possession yes but too slow then we conceded a sloppy goal – disappointed with that one. We had a bad five minutes after that one but after that I think it was only a matter of time before we got the goal.

“Hugo Lloris made a fantastic save and we should have had more goals.”

The United manager was also full of praise for Pogba, the France international showing some flashes of class during his long-awaited return from injury.

“Paul Pogba is a fantastic player and is finally fit again. He has had a horrific injury-hit season and he is desperate to make up for lost time,” Solskjaer added.

“It is great to see him show his qualities and the contribution he made was big in us getting a penalty. I think he showed how good he is as an all-round midfielder.”

It was also the first time United fans got a glimpse of the highly anticipated midfield partnership of Pogba and Fernandes and Solskjaer revealed he will be looking to get the best out of the pair.

“It is a definite partnership that we want to build on,” the United boss continued.

”They have trained together now they have had half an hour on the pitch together.

“We want the best players on the pitch of course and want to find a balance in the team.”

The result sees United remain in fifth two points behind fourth place Chelsea, while Spurs sit in eight six points off a place in the Champions League spots.