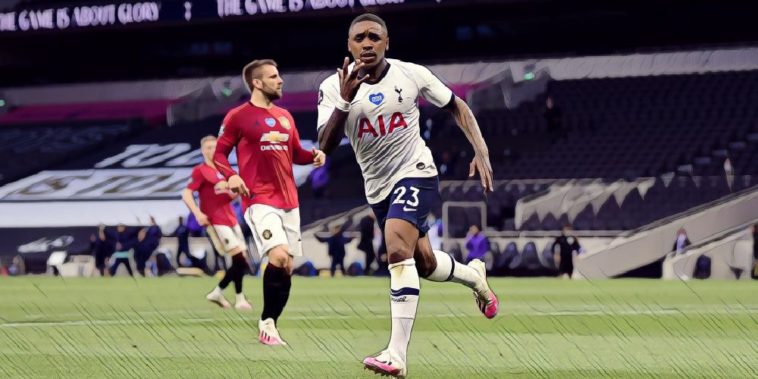 Jose Mourinho was effusive in his post-match analysis after his Tottenham Hotspur side were held to a 1-1 draw by his former employers Manchester United, the Spurs boss blaming VAR and a lack of attacking options.

Both sides came into the game harbouring ambitions of qualifying for next season’s Champions League, though their pre-lockdown form couldn’t have been any more of a contrast, Manchester United unbeaten in their previous 11 outings, while Spurs were without a win in their last six coming into this game.

After a cagey opening, however, it was Tottenham who broke the deadlock, some dreadful defending allowing January signing Steven Bergwijn through on goal, and the Dutchman’s rasping effort cannoned into the back of the net thanks to some less than convincing goalkeeping from David de Gea who really should have saved it.

United came out with renewed vigour in the second half, as Jose Mourinho reverted to type and tried to shut up shop, though the 63rd minute introduction of Paul Pogba from the bench would swing the pendulum firmly in the Red Devils favour.

The Frenchman went on to win his side a penalty after a clumsy challenge from Eric Dier, with Bruno Fernandes stepping up to dispatch the resulting spot-kick with nine minutes to play.

The goal saw the game open up further in what ended up being an enjoyable finale, with United being awarded a second penalty late on, though it was rightly overturned by VAR on review.

Speaking afterwards, Jose Mourinho opened up at length on his mixed emotions at the result.

“Happy with things, unhappy with others,” Mourinho told Sky Sports after the game.

“What did I like? I liked the team’s attitude, the team organisation, the control, following a plan, being very solid, giving United what they don’t like. Really, really happy with that.

“Unhappy with the fact that with the way I was reading the game, I had no bench to react to it. With Lucas [Moura] and Dele [Alli], they would have been on the bench or they would be playing, then on the bench, I would have had some of our attacking players, because they became more dominant because we were quite tired upfront.

“By being tired, we couldn’t press, so it was easier for them to build, and in the same time, we couldn’t counter-attack because we had no legs for that, so it was hard to manage the game in that sense.

“The second penalty, I’m unhappy with Moss because he didn’t give the free kick on Serge Aurier [in the buildup], he let it go. Again, he gave a cheap penalty, a non-penalty, and in this case, the VAR gave the truth of what happened in the box.”

Eric Dier started in central defence for the north London side despite Toby Alderweireld and Jan Vertonghen both being available, and the England international was involved in both penalty incidents.

“I thought he was fantastic. He played very well,” Mourinho said of Dier. “Him and Davinson [Sanchez], I think Davinson had one mistake in the first half whereby, a technical mistake, the ball went to Rashford, and Rashford had that chance with Hugo. Apart from that they both played very well, and Dier for me was absolutely perfect.”

What did you make of both decisions where Manchester United were awarded a penalty by Jon Moss in tonight's match? 🤔

While United could call on £89 million man Paul Pogba from the bench, Spurs were limited by a suspension to Dele Alli and an injury to Lucas Moura, and the Portuguese highlighted the differences between the two benches.

“It was not just Paul [Pogba], they had Paul, they had Greenwood, they had Ighalo,” Mourinho gripped.

”If they wanted to decide, they could have had Jesse [Lingard], he’s a guy that can change the pace of a game, or Juan [Mata], who in short spaces can find something really good. So that’s what a powerful bench can do if you have options.

“Today I had a powerful bench, with two great options at centre-back. But by starting Lamela, Bergwijn, Kane and Son, they were really really tired, and then on the bench, we didn’t have [an option].

“The next match, Lucas and Dele are back, so we have options.”

The result leaves Spurs in eighth in the table, four points behind United and six points being fourth-placed Chelsea, who will play relegation-threatened Aston Villa on Sunday.