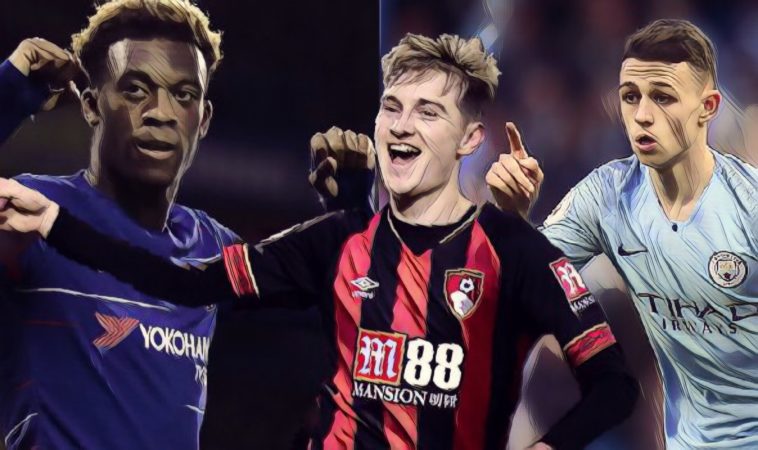 A number of young prospects broke into the first team of their clubs in the Premier League this season.

Breaking into the Premier League as a young player can be next to impossible. Less than 0.1% of youth players make it into the big time, but those who do are generally very talented indeed.

This season we have seen some brilliant footballers break into the senior setup of their respective clubs, and as the PFA gets set to announce the Young Player of the Year winner this Sunday, we’ve listed six players who smashed through the glass ceiling in the past year.

Six young players who made the breakthrough in the Premier League in 2018/19:

He looks about 15 years old but, at the age of 21, David Brooks has really made a name for himself at a time when it’s harder than ever for young players to climb up the top flight ladder.

Signed from Sheffield United for £10m last summer, the Wales international has provided seven goals and five assists in the league. The attacking midfielder offers thrust and incisive creativity in the Bournemouth forward line, creating eight big chances this season. That’s more than the likes of Sadio Mane, Paul Pogba and Pedro.

The French midfielder already had 30 senior appearances for FC Lorient under his belt when he moved to Arsenal last summer, but his development and adaptation to the Premier League, after making his debut at 19 years of age, in such a short space of time has been outstanding.

Guendouzi works tirelessly in the middle of the park, and with Lucas Torreira by his side, the Gunners could have their midfield pairing for years to come.

What a prospect this young player could turn out to be. With just 18 league games under his belt, the 19-year-old has already been involved in eight Burnley goals this season. He’s made five assists and scored three times — from just six shots on target.

That kind of conversion rate, albeit only from a small sample, bodes well for McNeil. We even named him Player of the Week for his stellar performance against Wolves at the beginning of the month.

If there’s one club you can count to waste young talents, it’s Chelsea. Some of the best prospects have come through their gates in the past decade, yet very few have made it into their first team.

Callum Hudson-Odoi might just be too good not to. Although Maurizio Sarri has been reticent to throw him in at the deep end, he has impressed for the Blues in the Europa League and is a twice-capped England international.

The under-17 World Cup winner suffered a ruptured Achilles tendon against Burnley on Monday night, ending his season, but at just 18 years of age, he has a bright future ahead of him.

Ever since England’s World Cup win at youth level a year and a half ago, it seems like everyone has been anticipating Phil Foden’s breakthrough. Pep Guardiola has been slow to integrate him into the first team, giving him just 271 minutes of game time in the Premier League at the time of writing, but it shouldn’t be forgotten that he’s just 18-years-old.

The central midfielder has been making steady progress thus far, providing seven goals and two assists in all competitions, and scored his first in the league against Tottenham Hotspur last weekend.

Inside the club, it is reportedly believed that Foden is so good that if he doesn’t break into the team as a regular starter that they might as well close the academy. If he can’t make it, then why bother?

The Crystal Palace full-back has continued his outstanding first campaign at the London club since nailing down the position as his own at the tail end of last season. The Croydon-born defender is a menace going forward, but without sacrificing defensive solidity, which is a rare quality indeed.

The breakout star of the year, it could have been oh so different for Wan Bissaka had he been granted the loan move he craved last year. The margins between failure and becoming a £40m rated sensation can be so fine.

Check out the latest episode of our Premier League Podcast