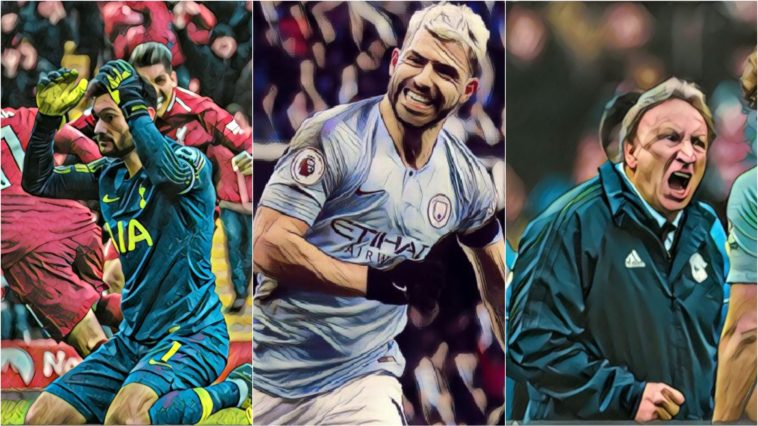 You may have noticed that the Man City fans, as well as Pep Guardiola after the game, were adorned in red and black scarves during their 2-0 win over Fulham at Craven Cottage. That was in tribute to former club secretary Bernard Halford, who passed away last week.

Known as Mr. Manchester City, Halford had worked at the club for 47 years and was an honorary life president at the time of his passing. Fulham helped City to honour him by laying out 1400 scarves in the away end, which had been sent down from Manchester before the game.

Special mention to former Liverpool player Iago Aspas, who scored a late winner against Villarreal in LaLiga at the weekend, completing an incredible comeback for Celta Vigo, who were two goals down after 15 minutes. The 3-2 win could be crucial in their bid to stave off relegation, and Aspas, who was substituted soon after scoring the winning penalty, was very emotional when he took his place on the bench.

Celta Vigo came back from 2-0 down yesterday to beat Villarreal 3-2, a victory helped by the return of Iago Aspas and one that could save them from the drop. Football is brilliant.pic.twitter.com/cUp7G3vxIz

This week’s honour goes to Dwight McNeil, whose performance on Saturday drove Burnley to victory against Wolves. The 19-year-old — nineteen! — was involved in both goals at the weekend, with his free-kick in the second-minute setting up a Conor Coady own goal, before his sweet strike in the second-half finished off the visitors.

McNeil was central to a crucial victory for Burnley in the race for Premier League survival, and he earned high praise for his performance afterwards. Chris Kamara on Goals On Sunday said he “has a bit of Ryan Giggs and Chris Waddle in him”.

It might be a bit early to say he will be on that level, but with three goals and four assists this season he has been one of Burnley’s most productive players going forward.

Bernardo Silva has stepped up to the plate this season in the absence of midfield maestro Kevin De Bruyne, who has struggled with injury this season. The Portuguese contributed to both goals in City’s 2-0 win over the Cottagers on Saturday, scoring a 20 yard drive off a pass from Sergio Aguero before returning the favour to his teammate. It hasn’t just been goals and assists Silva has offered the reigning champions this season, with the midfielder’s all-round play crucial to the side’s performance.

Victor Camarasa is no stranger to a golazo, and netted another for Cardiff City on Saturday. His goal gave the Bluebirds the lead and it seemed as if the Welsh outfit would come away with a terrific result, but Chelsea came away with all three points thanks to a late comeback and a bad refereeing call (but more on that later).

Sergio Aguero’s finish from a tight angle at Craven Cottage was vintage Aguero, so much so that we’ve become too accustomed to how brilliant he is. Do we appreciate how lucky we are to have such a talent in English football?

Manchester United were put to the pin of their collar by Watford, especially in the first half, forcing them to sit and play on the counter. Luke Shaw provided the much-needed relief to the pressure being applied on Ole Gunnar Solskjaer’s charges, hitting a terrific 30-yard pass to set Marcus Rashford through on goal to open the scoring in a 2-1 win.

Harry Kane‘s quick thinking from a free-kick saw him launch a perfect crossfield ball to Kieran Trippier, who in turn set up Lucas Moura for Spurs’ equaliser at Anfield.

No one will be kicking themselves from the weekend gone by as much as Hugo Lloris will be, after he gifted Liverpool the winning goal late on in their tussle with Tottenham.

The Frenchman weakly palmed a Mo Salah header straight into the path of Toby Alderweireld, and the goalkeeper failed to stop the ball rolling over the line when it seemed as if he had the opportunity to. That was his eight error leading to a goal in the last three seasons.

Following his great goal against Fulham at the weekend, Sergio Aguero is now on 228 goals for Man City. Why is that particularly notable? you ask. Well it means the Argentine is on the same amount of goals as Thierry Henry got in his Arsenal career — in 48 less games.

As I alluded to above, we won’t truly appreciate what we have until it’s gone. Are we at the point where Aguero nudges himself into the conversation for the Premier League’s greatest ever striker?

In that game Fulham didn’t have a single shot on target, which says something about how dominant City can be, but more about how despairingly bad the Whites are. They finished the game with an xG of 0.47, which is pretty stinky.

This week’s Donkey has to go to the officials in charge of Cardiff vs Chelsea on Sunday afternoon. The Blues scored an equaliser through Cesar Azpilicueta, who the linesman should really have seen was offside.

Then Chelsea centre-back Antonio Rudiger only received a yellow card from referee Craig Pawson for a foul on Kenneth Zahore when the Bluebirds attacker was clean through on goal.

Clearly incensed at the full-time whistle, Neil Warnock stood in the middle of the pitch as the players left the field, staring at the matchday officials until they decided to walk off without saying a word to the Cardiff manager. Extraordinary, and awkward.

Neil Warnock after the game. 😂 pic.twitter.com/auU9KQ15FE

Such decisions could have a huge effect on whether or not the club stay in the top flight this season, as they lie five points from safety with a game in hand. Oh, and that’s against Man City.

Fulham aren’t just getting it wrong on the field, but off it too, as the club seem intent on extorting their loyal fanbase with high ticket prices. Fans, who are becoming more disillusioned with the running of the club, staged a protest as part of their #StopTheGreed campaign ahead of the game.

Scottish fitbaw doesn’t get much of a mention in this column, but we couldn’t let the week go by without mentioning Alfredo Morales, who got his fifth red card of the season during the Old Firm Derby loss to Celtic on Sunday. Afterwards Steven Gerrard said he could no longer defend the player, but surely more fool Gerrard for keeping faith in the combustible forward?

“SHE TOOK THE KIDS DAVID!” pic.twitter.com/Txvv31iUx0

Read: Five observations from the League of Ireland this week