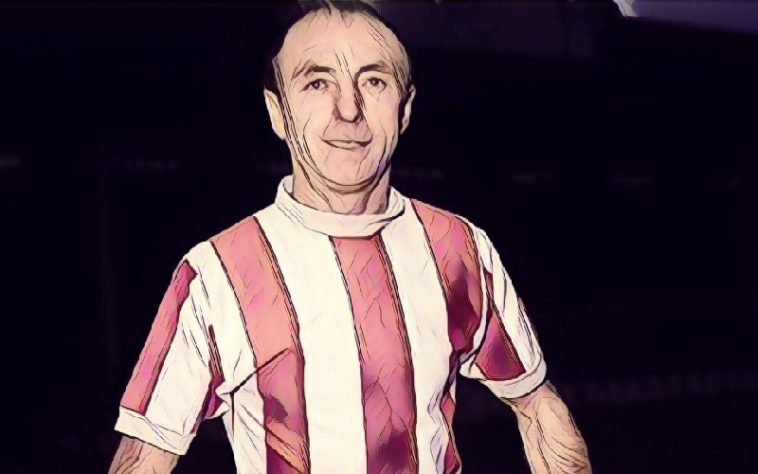 How could it be that young fans of the game still know the name of a man who made his debut for Stoke City in 1932? Such is the regard with which Sir Stanley Matthews is held in the game. A genius, a hero and a Stoke man through and through. Though he spent a number of very successful years at Blackpool, here we are going to concentrate on his time with the Potters.

When he was a teenager many of the biggest clubs in the region were interested in signing the young Stanley Matthews but in a move that would become historically vital, Stoke City manager Tom Mather managed to persuade Matthews’ father to allow him to come and work at the club. He joined the club as an office boy on his fifteenth birthday, earning one pound a week for his work there while also playing with the reserve side, where he would stay for two years.

There are moves that a player can do on the field that become synonymous with the players who develop them, for example the Cruyff turn and Ronaldinho’s no-look pass. Sir Stanley Matthews’ contribution to the game is almost certainly even more important than either of these. In a game against Manchester City, Matthews, a flying winger, came up against his full back.

At the time players were coached to wait for their marker to run at them and then try to beat them, Matthews took the game to his defender, running at them and putting them on the back foot, he then did what is now a standard move and dropped his shoulder, moving to cut inside before changing direction and beating his man on the outside. It might sound simple but it was revolutionary at the time and he was a master of his craft.

It wasn’t only his style of play that was revolutionary. He was ahead of his time in terms of how he looked after his body as well. He didn’t smoke, he didn’t drink and he ate incredibly well. He also worked to build his fitness up to a level that was unparalleled in English football at the time.

Matthews’ first taste of success came in the 1932/33 season when he helped Stoke to the Second Division title, scoring his first senior goal along the way. That it came against local rivals Port Vale made it even more special.

In his first season in the top division he played 29 times and Stoke secured their status in the league with a 12th place finish. Matthews continued to improve and added a number of tricks to his repertoire. At this stage he was starting to play regularly for the national team but never let that effect his commitment to Stoke City, playing 45 and  then 42 games for the club in the 35/36 and 36/37 season respectively.

His consistency was rewarded with a loyalty bonus of £650 but the board only paid him £500 as his first two years at the club had been as an amateur. That hurt his relationship with the club though he continued to play for Stoke things were starting to sour behind the scenes.

Some of his team mates were jealous of his involvement with England and with the poor atmosphere in the dressing room and the way he had been treated by the board, Matthews felt it was time for a move.

He handed in a transfer request which was denied but became public. 3000 Potters’ fans held a meeting urging him to stay and touched by their show of support he decided to remain at the club and played 38 games for Stoke in the 38/39 season helping them to 7th place.

These were the last professional games that Matthews would play for almost eight years. The league was suspended due to the outbreak of the second world war and Matthews immediately joined the RAF. He was based just outside of Blackpool and rose to the rank of Corporal. Throughout this time he played a number of unofficial and amateur games for England, Stoke and Blackpool. His father died in 1945 and from his deathbed asked his son for two things. To look after his mother, and to win the FA Cup.

When the league returned for the 1946/47 season, Matthews returned to Stoke City and begged a very impressive 30 goals in 23 games. Stoke as a whole scored 42 goals that season so Matthews was instrumental in Stoke reaching a best ever 4th place finish in the League. Despite that conditions and relations in the dressing room and with the board continued to cause problems and Matthews once again handed in a transfer request.

This time the request was granted and their star player moved to Blackpool, where he still lived following his wartime service, at the end of the season. It was at Blackpool that he managed to fulfil his promise to his father when he lifted the FA Cup in the game that would go on to be known as the Matthews final as he dragged his side back from 3-1 down to clinch the title.

Stoke had dropped down to the Second Division during his time away from the club but new manager Tony Waddington was building an impressive side and momentum was building at the Victoria Ground. Waddington convinced Matthews to return and despite the club’s financial woes he offered Matthews double the wages he had been on at Blackpool, knowing how important he would be to their push to promotion. “Welcome home, Stan. For years this club has been going nowhere. Now we’re on our way” Waddington said to Matthews as he signed his contract. His return to the club was a huge deal for the Stoke faithful.

Over 35,000 turned out to see the player’s second debut, more than three times the attendance of their previous home game and Matthews delivered. Setting up one of the goals in a 3-1 win against Huddersfield. Stoke were promoted as Champions the following season and Matthews was voted as FWA Footballer Of The Year, aged 48 – 15 years after he had first won the award.

He missed much of the following season due to injury and as his recovery time from injury seemed to be taking longer and longer, he was nearly 50 after all, he decided to call it a day after one more season. He spent much of that season playing for the reserves but he and his career was honoured with a knighthood on the 1st January 1965. He is the only player to be Knighted while still playing.

At the end of the season he called time on his 35 year professional career, despite his longevity he still felt that he had retired too early. Fittingly Stoke offered their living legend a testimonial and Stans XI, a team made up of other star players from the league lined up against an International XI of stars. The international side won the game 6-4 but Matthews was carried from the pitch on the shoulders of Puskás and Yashin. As clear a recognition of his brilliance and importance to the game as there could be.

In “retirement” Matthews coached sides all over the world, from Australia, to America and most often in Africa he worked to build the game around the globe and he even continued to play the game, only stopping when, aged 70 he injured himself in an exhibition game against a Brazil XI. “A promising career cut tragically short” he joked in his autobiography.

“It is not just in England where his name is famous. All over the world he is regarded as a true football genius” – Berti Vogts

He returned to Stoke in 1989 and was President of the club for a period before his death in February 2000. 100,000 people lined the streets of Stoke-on-Trent to pay tribute to Matthews and his ashes were buried beneath the centre circle of the Britannia Stadium. He had spent almost 20 years at the club helping them to promotion twice and their highest ever league finish, he changed the way the game was played and led the way in terms of professionalism and lifestyle. He was a true Stoke City Legend.