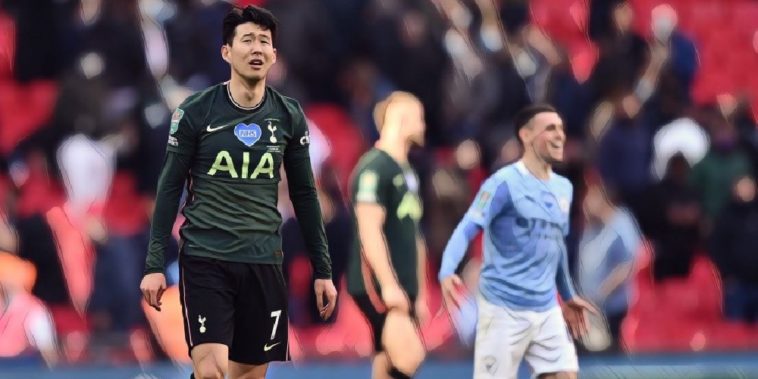 Spurs’ wait for silverware goes on as they were beaten 1-0 by treble chasing Manchester City on Sunday afternoon.

Spurs came into the as massive underdogs given the two side’s recent fortunes, interim boss Ryan Mason taking charge of his second game after Daniel Levy took the decision to sack Jose Mourinho this week.

It was wall to wall domination from Manchester City who were camped in the Spurs half right from the off, the Premier League leaders creating chance after chance, Riyad Mahrez and Raheem Sterling both seeing efforts going narrowly wide.

Phil Foden came closest to opening the scoring midway through the first half after his effort was blocked by Toby Alderweireld and crashed against the post, while Hugo Lloris made a flying save to deny Joao Cancelo in first half stoppage time.

Giovani Lo Celso would force a save from Zak Steffen early in the second half as Spurs came out with more positivity and intent after the break.

After their relentless pressure in the first half, City weren’t quite as slick in the second, but would finally net the winner with eight minutes to play, Aymeric Laporte beating his man at a free-kick to head home for Pep Guardiola’s side. The fact it was Laporte was a talking point after referee Paul Tierney strangely decided against booking the Frenchman early in the first half for a cynical foul, only to be booked minutes later for an almost identical challenge.

2 – Tottenham only attempted two shots in today's League Cup final against Man City, accumulating an expected goals total of 0.06, while in contrast the Citizens fired in 21 shots and posted an xG of 3.63. Bombarded. #CarabaoCupFinal #MCITOT pic.twitter.com/mCOP0FjLNe

“It was a difficult match,” he said. “I thought in the first half we rode our luck on a couple of occasions. There were times where it was controlled. In the second half we had a good moment and some set plays and I felt while we didn’t create much in the second half, neither did they. It’s difficult to concede from a set piece though.”

Inevitably, he was asked about the decision not to book Laporte for his first challenge, though the 29-year-old was keen not to dwell on it.

“I thought the first one was an absolute yellow but it’s not the talking point because if he gets the yellow he maybe doesn’t make the tackle. That’s not on our mind.”

Upon his appointment earlier this week, Mason said he wanted Spurs to be a side who played ‘brave and aggressive’ football, and to ‘play like Tottenham Hotspur’, though admitted he didn’t have long enough to work on patterns of play.

“We believed we wanted to play in a certain way,” he said. “We didn’t have long at all to work at it, so that’s obviously difficult, but ultimately that’s the way we want to go forward. While I’m here anyway that’s how I want the team to play and the players believe in that as well.

“We tried but I think Manchester City have probably had four or five years of the same coach and the same ideas so those situations come a lot more comfortably to them, but I think the fact that we tried and we believed and we kept going says a lot about the group.”

Next up for Spurs is a game against already relegated Sheffield United as they look to secure European football, currently sitting five points behind fourth place Chelsea with just five games to play.