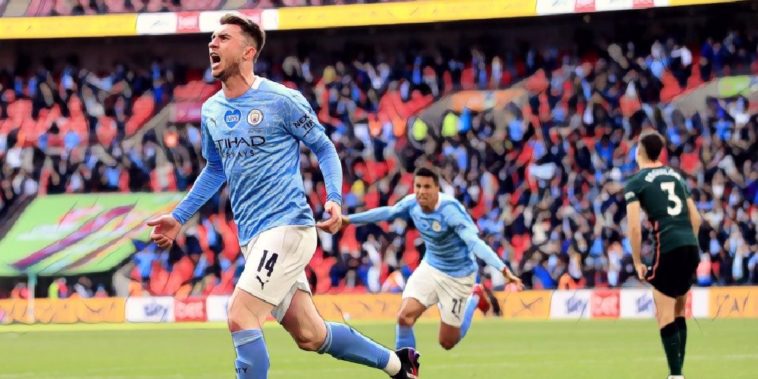 Manchester City’s pursuit of a historic treble got underway as they beat Spurs 1-0 to lift the Carabao Cup for a fourth successive season.

It was wall to wall domination from Manchester City who were camped in the Spurs half right from the off, the Premier League leaders creating chance after chance, Riyad Mahrez and Raheem Sterling both seeing efforts going narrowly wide.

Phil Foden came closest to opening the scoring midway through the first half after his effort was blocked by Toby Alderweireld and crashed against the post, while Hugo Lloris made a flying save to deny Joao Cancelo in first half stoppage time.

Giovani Lo Celso would force a save from Zak Steffen early in the second half as Spurs came out with more positivity and intent after the break.

After their relentless pressure in the first half, City weren’t quite as slick in the second, but would finally net the winner with eight minutes to play, Aymeric Laporte beating his man at a free-kick to head home for Pep Guardiola’s side. The fact it was Laporte was a talking point after referee Paul Tierney strangely decided against booking the Frenchman early in the first half for a cynical foul, only to be booked minutes later for an almost identical challenge.

The win would earn Manchester City a record equalling eighth League Cup success, with Pep Guardiola lifting the trophy for a fourth time, moving him level with the some of the greats of the game in Brian Clough, Sir Alex Ferguson and Jose Mourinho.

4 – Pep Guardiola has become the first manager to win the English League Cup in four consecutive seasons, while no manager has lifted the trophy on more occasions than the Spaniard (4 – level with Brian Clough, Alex Ferguson and José Mourinho). Retained. #CarabaoCupFinal #MCITOT pic.twitter.com/pHOnZ9kNWW

The game was played in front of 8,000 supporters – 2,000 from each side and 4,000 from the local area around Wembley – all as part of a government test event to return fans to stadia safely, and speaking afterwards, Pep Guardiola was delighted to see his side play in front of City fans for the first time in over a year.

“It’s not full [in the stadium] but it was a great noise,” he told Sky Sports.

“Today we are incredibly happy that we have four in a row in this competition. We tried to win the game, created a lot of chances. They had some chances on the counter but in general we had a good game.”

Asked whether his side practise set-pieces, the Catalan took a dig at the gruelling fixture list, saying he doesn’t have time to work on anything in particular. “We don’t have time to work,” he said. “Just the principles from the beginning so we know what to do and we just try to recover. It is tough but it is what it is – the schedule is this way.”

It was the 30th trophy that Guardiola has collected in his impressive career, and the Catalan was asked on his thoughts: “It’s good. I was in big clubs – Barcelona, Bayern Munich and here – so that is why it is easier to do it.”

Next up for Man City is the first leg of their Champions League semi-final against PSG.