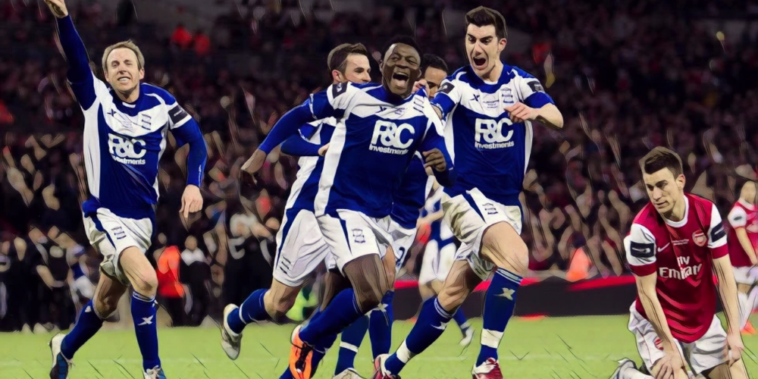 Manchester City will face Tottenham in the Carabao Cup final at Wembley this weekend, as both sides contest for English football’s first piece of major silverware of the season.

Pep Guardiola’s side are seeking a fourth consecutive League Cup trophy and sixth in just eight seasons, City having dominated the competition in recent seasons to strengthen their case as England’s dominant force.

Spurs – now under the guidance of interim manager Ryan Mason – will head into the clash as underdogs as they bid to end a 13-year wait for silverware success.

Ahead of Sunday’s showpiece, we look back at five of the best League Cup finals this century.

A final with no end of sub-plots and one that delivered at Cardiff’s Millennium Stadium, with Chelsea manager Jose Mourinho and Liverpool counterpart Rafael Benitez both seeking to win their first silverware since moving to English football.

Liverpool could hardly have wished for a better start as John Arne Riise’s thumping volley put the Reds ahead after just 45 seconds, lashing home Fernando Morientes’ cross to raise the roof in South Wales.

In what was the precursor to an epic rivalry throughout the mid-2000s, Steven Gerrard’s own goal brought the sides level with 11 minutes remaining, Mourinho sent off in the aftermath for goading the Liverpool support with a finger to his lips.

It was a cruel moment for the Liverpool captain, who had been subject of strong transfer interest from Chelsea the previous summer and the Blues would return unsuccessfully for his services once again in the following months.

Gerrard’s own goal forced extra-time and goals from Didier Drogba and Mateja Kezman put Chelsea in control, though Antonio Nunez’s header set up a nervy finish for the west London side.

Chelsea ultimately held on, securing the first piece of silverware of the Mourinho era.

Tottenham upset the odds to secure their first piece of major silverware in almost a decade in 2008, coming from behind to beat London rivals Chelsea in the first-ever League Cup final at the new Wembley.

Juande Ramos’ side headed into the clash as underdogs and were struggling in the Premier League, but bounced back from falling behind to be crowned winners at the national stadium.

Defeat proved to be the first of several near misses for Avram Grant and Chelsea, who also finished as runners-up in the Premier League and Champions League during the 2007/08 season.

Everyone loves an underdog tale, don’t they?

Birmingham reached the final of the League Cup in 2011 despite struggling in the Premier League, Alex McLeish’s side embroiled in a relegation battle as they prepared to face Arsenal at Wembley.

Arsenal were without a trophy in six years but started as red-hot favourites to end that mini-drought, though fell behind as towering target-man Nikola Zigic headed home amid a crowd of players for Birmingham.

Robin van Persie’s expert volley restored parity before the interval, but the Gunners were unable to find a second as Birmingham’s Ben Foster produced a superb goalkeeping display – receiving his second Man of the Match award for a League Cup final after previously receiving the accolade for Manchester United against Tottenham in 2009.

Foster’s heroics provided the foundation for Birmingham to snatch a dramatic, unlikely, and utterly comical winner, a calamitous mix-up between Wojciech Szczęsny and Laurent Koscielny allowing Obafemi Martins to snatch an 89th-minute winner.

Birmingham celebrated their first major silverware since 1963, later becoming the first team in Premier League history to win a trophy and be relegated in the same season.

The threat of an upset, a second-half fightback and one of the greatest ever League Cup final goals, the 2014 final saw Manchester City come from behind to end Sunderland’s hopes of a first major trophy in over four decades.

Sunderland sprang a surprise in the opening exchanges as Fabio Borini fired the Black Cats into a 10th-minute lead, getting the better of Vincent Kompany before firing a low finish across goal to open the scoring.

Gus Poyet’s side had claimed the scalps of Chelsea and Manchester United on their way to the final and continued that fearless approach at Wembley, carving out several opportunities and heading into half-time ahead.

The final turned within the space of just two second-half minutes, however, with City’s equaliser coming in sensational fashion as Yaya Toure whipped a spectacular finish beyond Vito Mannone from distance.

Jesus Navas scored a third on the counter-attack in the closing stages, securing Pellegrini his first trophy since arriving into English football.

Ibrahimovic’s brilliant free-kick opened the scoring for the Red Devils at Wembley, before Jesse Lingard’s composed finish doubled the advantage despite Southampton having the better of the chances.

Southampton were spirited throughout and fought back admirably into the contest, scoring a deserved goal just before the break as Manolo Gabbiadini halved the deficit in first-half stoppage time.

Gabbiadini netted his second just three minutes after the restart with a predatory turn and finish, but the Saints’ hearts were broken as the full-time whistle approached, Ibrahimovic crashing home a headed winner to spark jubilant celebrations from the Red Devils’ support.

It was tough to take for Southampton, as both Mourinho and Ibrahimovic added yet more silverware to their respective collections.