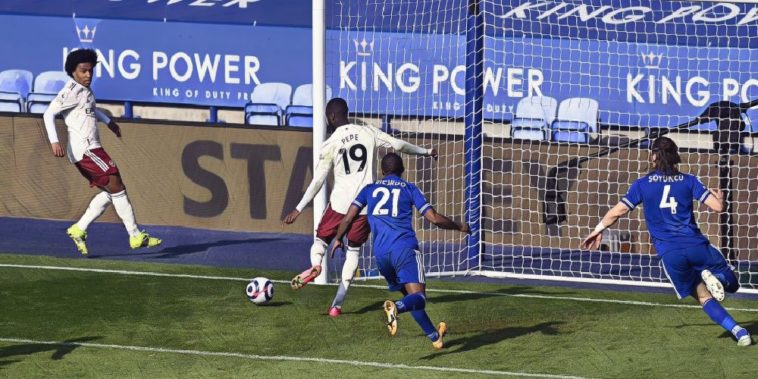 Brendan admitted his Leicester City side looked ‘tired’ as they suffered a 3-1 defeat at home to Arsenal on Sunday, a game that saw the Foxes add to their lengthy injury list.

The two sides came into the game having had contrasting fortunes in the Europa League in midweek, Arsenal grabbing a late winner to edge past Benfica, while Leicester slipped to a 2-0 defeat to Slavia Prague to crash out the competition.

It was the Foxes who made the early breakthrough, former Anderlecht midfielder Youri Tielemans allowed ample free space to charge at the visitors’ defence, before firing past ‘keeper Bernd Leno who perhaps should have done better.

The away side then thought they’d won a penalty after Wilfried Ndidi brought down Nicolas Pepe, although VAR adjudged that the foul had taken place just outside the penalty area, despite looking extremely tight.

Their positive reply after conceding was rewarded, however, as former Chelsea duo, Willian and David Luiz combined to bring the Gunners level, Luiz heading home brilliantly from his compatriot’s dinked free-kick.

Mikel Arteta’s side then took a deserved lead on the stroke of half-time, Alexandre Lacazette netting from the penalty spot after Ndidi was penalised for a clear handball.

The visitors then extended their lead not long after the restart, a swift breakaway rounded off by wideman Pepe, following good work by Martin Odegaard and Willian inside the penalty area.

Leicester struggled to deal with him. pic.twitter.com/fHiICNYKNs

In truth, the Gunners held on with relative comfort in the final half-hour to claim a vital three points in their push for European qualification, Brendan Rodgers acknowledging that his side weren’t at the best on the day and simply ‘lost to the better team’.

“I thought we didn’t play well in the first half,” he told BBC Sport. “We didn’t have the ball enough. I expected us to pressure them more. We were too static; I thought we looked a little tired to be honest.

“In the second half we showed more spirit but we were unlucky with the third goal. Credit to our players, they kept working and gave everything. We just lost to the better team today.

“Arsenal are able to rotate their squad. We tried to rotate our team on Thursday. It’s not ideal [having matches so close together] but we have to play the games. We just get on with it.”

Aside from dropping points, the major issue for Rodgers was more injuries for an already depleted team, the Northern Irishman revealing that Harvey Barnes could be facing an extended period on the sidelines.

“I think Jamie Vardy is okay. He felt his calf go making a pass but it was fine for the rest of the game,” he said.

“It looks like Harvey Barnes is going to need an operation on his knee. I just spoke to the doctor; he might be out for six weeks. That’ll be a huge blow for us.

“It’s been unfortunate but it’s the uniqueness of the season. We haven’t cried about it all season, we’re not going to start now.

“We have to find a way with the players that we have. The players have been on a brilliant run over the course of the season. Twelve games to go, those influential players are out. The challenge is to find a way to keep [our form] going.”

Leicester’s squad depth will be tested as they face a trip to Burnley in just a few days time, before a clash with struggling Brighton on Saturday.