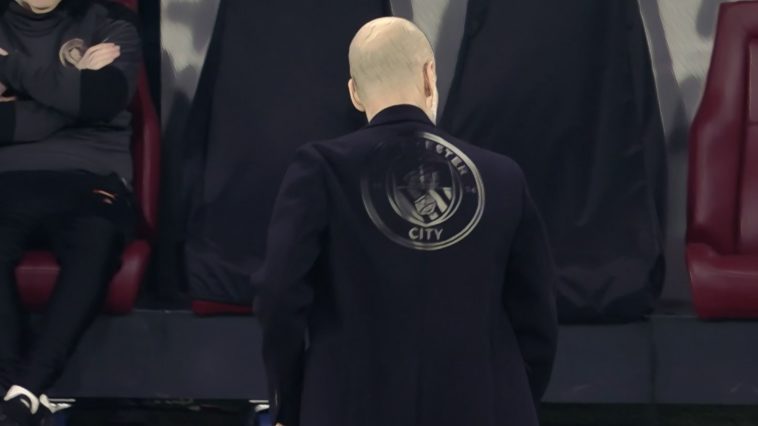 The funniest tweets from the world of football this week, featuring the best recreation of goal celebrations you will ever see, Pep Guardiola’s hideous touchline attire, and when football shows its true class.

I have had this video on repeat for three days straight.

😂😂 it is Sterling for me😂😭 pic.twitter.com/OGlqYiW6KL

This video, on the other hand, is nothing more than classturbation.

Who let Pep leave the dressing room with that jacket still on him?

Pep Guardiola's coat is so bad that Juanma Lillo's eyes have popped out their sockets. pic.twitter.com/S9VAayV1aB

I wonder what Roberto Carlos is getting up to these days.

Man's gonna ping me my food from 40 yards out pic.twitter.com/x8dJksZ2bR

How could you not love Tomas Soucek?

Tomáš Souček could genuinely be the most popular man in football 😂

His former Slavia Prague teammates dropped him a call after shocking Leicester and advancing in the Europa League! #UEL pic.twitter.com/nJntdNMlSF

17 years old playing in the champions league, think you’d ever see a 17 year old in Non-league.. these managers will tell you ‘they need experience’ 🤣

José Mourinho blaming the players. Who could have possibly foreseen this happening?

Jose Mourinho arrived at Tottenham in November 2019 marvelling at the quality of the squad. 15 months later, with ~£135m spent on transfers, and now he’s claiming matters are beyond his control as the players aren’t good enough. What a curious development.

Although maybe he has a point…

Olé! The five players with the most nutmegs in Europe’s top five leagues

I’m so starved of football in the flesh that I’ll be bringing the flares to the local park for Sunday league matches the first opportunity I get.

Bringing the stadium experience to your home.

Gutted we can't be in the away end at St. James' Park tonight, so I've improvised. #NEWWOL #WWFC pic.twitter.com/mslCCJpSM1

Zlatan Ibrahimovic went in on LeBron James for his activism, and the obnoxious Swede got deservedly dunked on.

LeBron responded after Zlatan Ibrahimovic criticized him for his activism.

“I’m kind of the wrong guy to actually go at because I do my homework.” pic.twitter.com/VyKgBrYuiz

What does the Elland Road pitch and Frank Lampard have in common?

Peter Walton only has one setting.

Something tells me the Labour leader doesn’t actually know what a box-to-box midfielder does.

Sir Keir Starmer on his football strategy – “I’m a midfield player in the middle of the pitch, I like to think I’m a box-to-box player which means across the whole pitch” #ridge

LeBron wasn’t the only one dunking on someone he’s never met.

I can think of a few words to describe this. ‘Iconic’ is not one of them.

“Give me Zidane and ten pieces of wood, and I’ll win the Champions League.”

We were all thinking it.

If you asked me to imagine what The Athletic's Fulham correspondent looks like, I would picture Sunderland's new owner. pic.twitter.com/W8y6MmDg6a

“There’s no such thing as a perfect mem-“

"sHoUlD nEvEr aV bEeN a PeN" pic.twitter.com/tWzpseyOYh

This one’s not far behind.