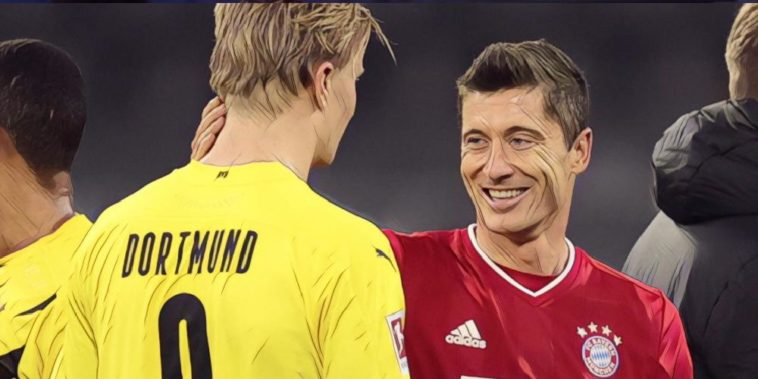 Scoring goals is often described as the hardest part of football and having a player who can find the back of the net regularly is a priceless commodity for any side at any level of the game.

Modern football has seen the increase in positions such as false nines and inside forwards with the roles now commonplace amongst Europe’s leading sides, but there will always be a place for out-and-out strikers at the very highest level.

We’ve decided to pick out some of the very best natural goalscorers on the continent currently, here are five of the best out-and-out strikers in European football right now:

The gold standard for number nines in world football right now, Robert Lewandowski may just be the finest footballer on the planet at present.

Lewandowski has scored prolifically during a stunning career in German football, but has elevated his game to even greater heights over the past 18 months, the forward named as The Best FIFA Men’s Player for 2020 after firing Bayern Munich to a historic treble-winning season.

The 32-year-old finished as the leading scorer in each competition as Bayern won the Bundesliga, DFB-Pokal and Champions League, finishing the campaign with a career-best 55 goals in all competitions and an incredible collection of winners’ medals.

Lewandowski has scored 40+ goals in each of the past five seasons and is well on course to reach that figure once more, having scored 32 goals so far this season including 26 in just 21 league appearances for the German champions.

Already the third-highest scorer in Bundesliga history, he recently moved up to third in the Champions League’s all-time rankings and trails only the legendary Gerd Muller for goals in a Bayern Munich shirt.

Muller holds the record for most goals in a Bundesliga season with 40, a figure previously deemed unbeatable but one Lewandowski now has firmly in his sights with the Poland international at the prolific peak of an astonishing goalscoring career.

If Lewandowski is the current benchmark, then Erling Haaland is the man many expect to become the leading goalscorer of his generation following a sensational start to his career thus far.

Haaland’s rise has been both rapid and remarkable, announcing himself to world football with a hat-trick on his Champions League debut for Red Bull Salzburg and earning a move to Borussia Dortmund after netting 28 goals in 22 appearances over the first half of 2019/10 for the Austrian outfit.

Dortmund’s gamble on the emerging forward has quickly proven to be a shrewd investment, Haaland having exceeded even the Bundesliga side’s wildest expectations since moving to the Westfalenstadion.

The 20-year-old has scored 43 times in 43 appearances across all competitions and is the current leading scorer in this season’s Champions League, his current record standing at a barely believable 18 goals in just 13 games amongst Europe’s elite.

Those frightening figures mean the Norway international has already outscored the Champions League career totals of iconic players including Ronaldo, Francesco Totti and David Villa, a staggering statistic for a player whose potential seemingly has no limits.

The numbers are mind-boggling and the performances difficult to comprehend, Haaland on course to eclipse even some of modern football’s greatest goalscorers if he remains on his current level of trajectory.

Remember when there were accusations that all Romelu Lukaku did was score goals?

Well, the fans of Inter Milan certainly don’t mind following a stunning start to the forward’s career with the club since arriving from Manchester United.

Lukaku scored 34 goals in all competitions during a prolific debut season to fire Inter to runners-up finishes in both Serie A and the Europa League, whilst his fine form has continued with 17 goals in just 22 league appearances in 2020/21.

No player – not even Ronaldo – has scored 50 goals in all competitions for Inter in quicker fashion, whilst the Belgium international ranks sixth amongst all players for most goals scored in their first 50 games in Italian football’s top flight.

The names ahead of him, including Cristiano Ronaldo, Ronaldo and Andriy Shevchenko, are an indication of the impact the 27-year-old has made with the powerful star the perfect spearhead of Antonio Conte’s improving side.

Inter currently lead the title race by four points as they seek a first league title in more than a decade, the club confident of winning a long-awaited Scudetto with their guaranteed source of goals leading the line.

Harry Kane is in danger of leaving this list of out-and-out strikers given his development this season, the England captain currently leading the Premier League for assists after taking on a more creative role at Tottenham during the current campaign.

Kane, however, has been one of the game’s best centre-forwards for some time and remains an elite goalscoring threat, scoring 21 goals in 32 appearances in all competitions for the north London side this season.

The 27-year-old trails only Mohamed Salah and Bruno Fernandes for goals in the Premier League this season as he goes in search of a third career Golden Boot, a feat only previously achieved by Alan Shearer and Thierry Henry in the division’s history.

Kane is amongst the most complete forwards in world football but his best moments often come when given a sight of goal, possessing an unerring ability to find the bottom corners with world-class shooting off either foot.

Kane is irreplaceable to Spurs and their hopes of success under Jose Mourinho, and will have his chance to end the club’s long wait for major silverware when he takes on Manchester City in the Carabao Cup final in April.

His form this season also offers hope to England that he can make an impact at this summer’s European Championships, where he will be seeking to add to the World Cup Golden Boot won in 2018 as the Three Lions bid to conquer Europe.

Ciro Immobile’s name is rarely mentioned amongst the leading number nines on the continent, though there aren’t more regular sources of goals than the prolific Italy international.

Immobile’s career has been a mix of notable highs and difficult spells, his failure to replace Robert Lewandowski at Borussia Dortmund often used against him, but since signing for Lazio there has only been one dominant feature of his game – goals.

Immobile scored more league goals than Lewandowski last season to fire Lazio into the Champions League group stages for the first time in more than a decade.

He scored more goals, in fact, than any other player in Europe to become the first player outside of Lionel Messi and Cristiano Ronaldo to win the European Golden Shoe outright since 2009.

The 31-year-old is an instinctive finisher with elite movement and his 36 league goals in Serie A last season also matched the record for most in a single campaign, the Italian a talismanic figure for the capital club and amongst the continent’s best goal-getters at present.

He has 14 league goals for the season so far and trails Cristiano Ronaldo by four as he bids to retain the Capocannoniere award as Serie A’s top scorer, another victory this season will take Immobile past the likes of Michel Platini and Giuseppe Meazza into outright second for most awards in the division’s history with four.