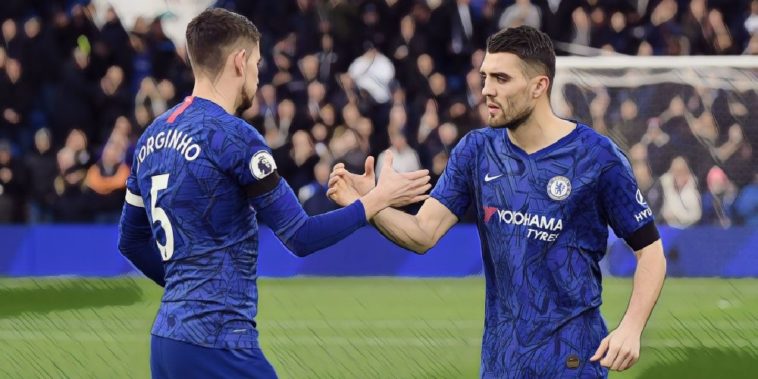 Jorginho has opened up on his impressive midfield partnership with Mateo Kovacic, the two men having been central to the team’s change in fortunes under Thomas Tuchel.

While both played important roles under former boss Frank Lampard, the switch to a 3-4-3 formation in recent weeks has left both Jorginho and Kovacic with even greater responsibility as a midfield duo – a move which looks to have paid off.

In Tuchel’s early start to life at Stamford Bridge, Chelsea have won six of their eight games in all competitions, while they’ve conceded just twice in that time.

The midfield men have not only been providing greater protection to the back three, but also offering a creative presence in the centre of the park, with the forward players currently struggling to click.

With the usually impressive N’Golo Kante making a gradual return to full fitness, the two men have become Tuchel’s first-choice midfield pairing and have so far not put a foot wrong.

According to former Napoli man Jorginho, he and his midfielder partner ‘have a very good relationship’ and have a good understanding of how to work effectively as a pair.

“I have a very good relationship with him because we think the same way about football, we understand each other,” Jorginho told chelseafc.com.

“We know what we want to do, what each other wants to do, so I find it quite easy playing with him because we think the same way.

“We know who needs to be in that position in that moment so we leave space for each other in the right moment. We cover each other’s backs, we understand when we need to be close to each other and when we don’t.”

Chelsea are set to take on Manchester United at Stamford Bridge on Sunday afternoon, the two sides having played out a drab goalless draw earlier this season.