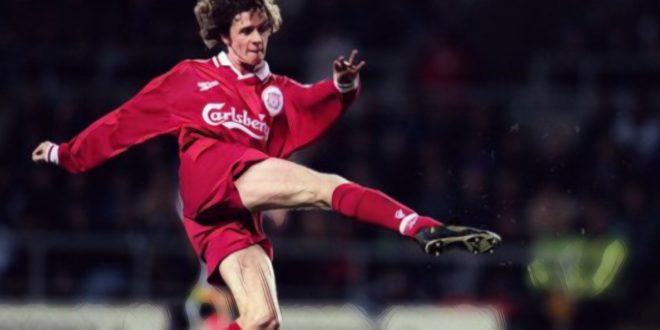 Revisiting the 1996/97 Premier League Team of the Year

Our latest instalment of past Premier League seasons revisits a memorable 1996/97 campaign, a season which saw a host of exciting foreign arrivals in English football and the division’s leading forward head home in a world-record deal.

Manchester United were crowned champions for the fourth time in five seasons in what surprisingly proved to be Eric Cantona’s final season in football, whilst Arsene Wenger took charge at Arsenal to lay the early foundations for a golden era in north London.

Elsewhere Middlesbrough’s expensively assembled foreign legion helped the club to two cup finals but couldn’t prevent relegation to the second tier, whilst Chelsea were introduced to a new hero following the mid-season signing of Gianfranco Zola.

We’re continuing our look back at the star performers from each Premier League season, revisiting the 1996/97 PFA Team of the Year:

Arsenal secured their highest finish of the Premier League era to date after achieving a third-placed finish in the division, the club’s success once again largely built on a fine defensive record.

The Gunners – who saw the unheralded Arsene Wenger arrive as the club’s new manager in September – boasted the Premier League’s best defensive record for the third time in the past four seasons.

Key to the club’s success was the performances of England number one David Seaman, who returned from a fine European Championships on home soil to earn inclusion in the divisional Team of the Year.

Seaman kept 10 clean sheets for the north London outfit, the goalkeeper voted as the best in the division by his fellow professionals for the second time in his career.

Another player to earn a place in the Premier League’s Team of the Year for a second time, Manchester United’s Gary Neville made it back-to-back inclusions after another title-winning season at Old Trafford.

Neville had emerged from the club’s academy ranks to quickly establish himself as a key figure for club and country, the right-back the youngest first-choice member of England’s Euro ’96 side.

The Bury-born star made 44 appearances in all competitions and scored once for Sir Alex Ferguson’s champions, helping the club continue their early dominance of the Premier League and reach the semi-finals of the Champions League.

Another member of Arsenal’s uncompromising defensive line up, Adams was named in the Premier League’s Team of the Year for the third time in four seasons following another stand-out campaign.

The England international once again marshalled the division’s best defence and contributed three goals at the opposite end, including a dramatic late winner to secure north London derby success over Tottenham at Highbury.

Adams finished the season with 35 appearances in all competitions, though his performances were not enough to help Arsenal secure Champions League qualification for the first time, missing out on a place in Europe’s elite by virtue of goal difference.

Liverpool – like the aforementioned Arsenal – were involved in the title race for much of the season before missing out on Champions League qualification on goal difference, their charge led by a mix of youthful exuberance and solid experience.

England international Wright certainly fell into the latter of those categories, the 33-year-old bouncing back from the disappointment of missing the European Championships through injury to enjoy a fine season on Merseyside.

The centre-back was a virtual ever-present and made 43 appearances in all competitions, scoring twice including a goal in the Reds’ Cup Winners’ Cup semi-final defeat to Paris Saint-Germain.

The second of three Liverpool players to make the division’s best XI, Bjornbye enjoyed the best season of his Premier League career to earn inclusion in the 1996/97 PFA Team of the Year.

The Norwegian overcame a difficult start to his career on Merseyside to establish himself as a regular under Roy Evans, making more appearances than any other player in all competitions and playing every single Premier League fixture of the campaign.

David Beckham had come through the academy ranks to make an impressive breakthrough at Old Trafford the previous season, before catapulting himself into the limelight with an outrageous opening day half-way line goal at Wimbledon.

The goal was one of eight the youngster scored in the Premier League as United were once again crowned champions, whilst the technique and delivery he became renowned for was evident with a further eight assists provided.

Beckham’s performances saw him named as the PFA Young Player of the Year, winning the prestigious accolade alongside the first of four consecutive inclusions in the Premier League’s Team of the Year.

There can be a valid argument that Roy Keane was perhaps the most influential player of the Premier League era, the Irishman the driving force behind much of Manchester United’s successes throughout the nineties and early 2000’s.

Keane was a fine footballer with an unrivalled competitive edge, a dominant box-to-box midfielder who was once again pivotal as United were crowned champions in 1996/97, winning his third league title since making the move to Old Trafford from Nottingham Forest.

Such was his impact, Keane was named in the PFA Team of the Year despite suffering a series of knee injuries which restricted the midfielder to just 21 league appearances.

The no-nonsense midfield anchor of Newcastle’s hugely entertaining side, Batty was included in the PFA Team of the Year for the second time in his career after helping the Magpies to a runners-up finish.

Batty had moved to the North East after helping Blackburn win the Premier League title, though he was unable to help the Magpies to a long-awaited success despite the presence of talents such as David Ginola and Alan Shearer on Tyneside.

The combative star’s committed approach won him admirers from the St James’ Park crowd and the rest of the division, however, Batty named as the best midfielder of the season alongside the similarly tough-tackling Keane.

The nineties proved very much a transitional phase for Liverpool who struggled to replicate their successes of the previous decade, the Reds labelled as nearly men following a series of near misses for major silverware.

Amongst the club’s leading lights was a home-grown talent, McManaman regarded among the league’s best creative talents for much of the decade.

The England international had finished as the leading assist provider in the division the previous season, before scoring seven goals and providing six assists to be named in the Premier League’s best XI.

Newcastle responded to the disappointment of finishing as runners-up with a huge statement of intent, signing England international Alan Shearer in a world-record £15m deal from Blackburn Rovers.

Newcastle’s title-challenge ultimately failed, however, and the Magpies finished as runners-up once more despite the best efforts of their number nine, who earned a sixth consecutive nomination in the Team of the Year and was named as the PFA Players’ Player of the Year for the second time in his career.

The arrival of the relatively unknown Arsene Wenger at Arsenal drew headlines and the 1996/97 season saw the notable arrivals of future stars Patrick Vieira and Nicolas Anelka, but it was a member of the Gunners’ old guard who fired the club’s push towards the title.

Ian Wright had scored prolifically over the opening seasons of the Premier League era and bounced back from missing out on England’s Euro ’96 squad with another fine campaign in north London, scoring 23 league goals including a brilliant hat-trick against Sheffield Wednesday in September.

Amongst Wright’s highlights also included a winner at title rivals Newcastle, the forward included in the division’s best XI after finishing as the runner-up to Shearer in the race for the division’s Golden Boot.