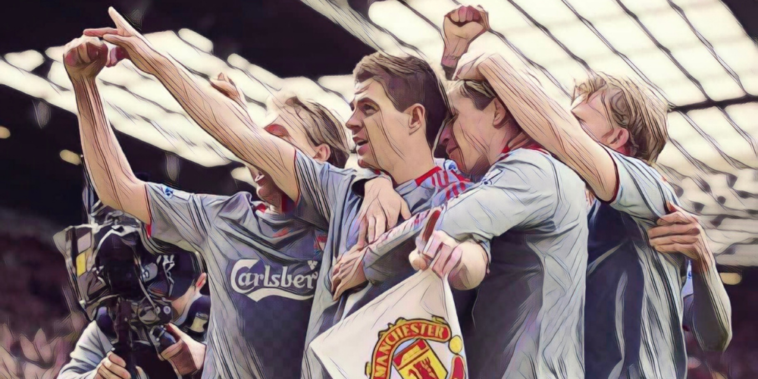 Liverpool travel to face Manchester United in the Premier League on Thursday in the division’s most illustrious fixture and a meeting between the two most successful sides in English football history.

The north west rivals have a long rivalry that stretches back decades and have played out some memorable clashes in the Premier League era, with arguably Liverpool’s finest Old Trafford success coming during the 2008/09 season.

The two teams were embroiled in the title race with Rafael Benitez’s Reds desperately bidding to catch the league leading Red Devils, arriving seven points adrift and on the back of a 4-0 thrashing of Real Madrid in the Champions League.

Liverpool continued that form to secure an emphatic 4-1 victory and reignite the title race, though ultimately fell short as Sir Alex Ferguson’s side were crowned champions at the end of the season.

Ahead of this week’s clash, we’ve decided to look back at the Liverpool XI to win 4-1 at Old Trafford.

The Spaniard proved a fine acquisition and won the division’s Golden Glove in each of his first three seasons on Merseyside, playing a pivotal role in the club’s defensive strength during the Benitez era.

He made 396 appearances for the club across all competitions during an eight-year spell before enjoying a nomadic existence across European football, spending time with continental giants including Bayern Munich, Napoli, AC Milan and Lazio.

Liverpool’s plans were altered during the warm-up following an injury to Alvaro Arbeloa, with Jamie Carragher shifted from his usual central role into a position at right-back.

The defender gave a typically uncompromising and committed display against the energetic Park Ji-Sung, helping to secure a memorable win for the visitors at the home of their arch-rivals.

Carragher spent the entirety of his career with Liverpool and won seven major honours after coming through the club’s academy ranks, his total of 737 appearances behind only Ian Callaghan in the Reds’ all-time list.

Skrtel never reached those heights despite an eight-and-a-half-year spell on Merseyside, one that included a mix of highlights for the Slovakia international alongside some indifferent performances.

He was named as the club’s Player of the Season in 2011/12 and won 104 caps at international level, but fell out of favour following Jurgen Klopp’s arrival as manager before joining Fenerbahce.

Looked a more fearsome opponent than he perhaps ever was.

Amongst Liverpool’s best bargain buys and greatest servants of the Premier League era, Sami Hyypia was coming towards the end of a fine Liverpool career during the 2008/09 season.

The Finland international was one of the best in the division at his peak, though was restricted to a squad role in what proved to be his final season at Anfield, receiving a late call-up to the starting side for the clash at Old Trafford after Arbeloa’s injury.

Hyypia retains a special place in the affections of the Liverpool support after winning 10 trophies during his time with the club, his arrival in the late nineties helping shore up a previously vulnerable defence.

Fitness issues plagued Fabio Aurelio’s time with Liverpool, the classy left-back struggling with injury throughout much of a six-year spell with the club.

He became the first Brazilian to sign for the Reds after previously working with Benitez at Valencia, and produced some memorable moments including scoring the third goal in this thumping win with a fantastic free-kick beyond Edwin van der Sar.

But for the fragility of his body, Aurelio would likely have left a more lasting legacy at Liverpool.

Included in the side with Xabi Alonso a major absentee from Liverpool’s regular midfield line-up, Lucas Leiva did what Lucas Leiva always tended to do, worked hard and made himself a nuisance in the centre of the park.

The midfielder recovered from a difficult start to his Liverpool career to become a popular fans’ favourite, spending a decade with the club and endearing himself to the fanbase by giving his all to the cause.

West Ham’s double signing of Javier Mascherano and Carlos Tevez remains one of the weirdest transfers in Premier League history, but it was not until the former’s move to Liverpool where we truly saw the best of the combative Argentine.

Mascherano’s climb to becoming one of the world’s best defensive midfielders accelerated on Merseyside, becoming an all-action presence at the base of the midfield and hurtling into challenges.

The combination of Mascherano-Alonso-Gerrard remains probably the best midfield line-up never to win the Premier League, the star spending three-and-a-half years with the Reds before a trophy-laden spell at Barcelona.

Liverpool’s leader and a player who regularly relished playing against Manchester United, Gerrard scored eight league goals against the Red Devils throughout his career including the crucial second from the penalty spot in this 4-1 win.

Gerrard enjoyed arguably the best period of his career playing a supporting role to Torres, the two forming a brilliant understanding with the former amongst the Premier League’s best players in 2008/09.

He finished the season with a career-best 16 league goals, his performances later recognised with the FWA Footballer of the Year award.

Dirk Kuyt was Liverpool’s Duracell Bunny for much of his time on Merseyside, winning plaudits for his endless energy down the right-hand side.

Kuyt signed as a centre-forward following a prolific spell at Feyenoord and whilst he failed to replicate those goalscoring exploits proved an important figure during six seasons at Liverpool.

He scored 71 goals in 281 appearances with many of them proving timely, reaching 10+ league goals on three occasions in the Premier League.

Kuyt may have failed to hit the net in the win at Old Trafford, but had his day against the Red Devils two years later, netting a close-range treble at Anfield from a combined distance of about six yards.

Perhaps the most forgettable member of this starting XI, Albert Riera enjoyed some success during his two seasons at Liverpool, providing balance to the club’s left-hand side.

The former Manchester City loanee was a surprise signing by Benitez after arriving from Espanyol, making 56 appearances and scoring five times before a falling out with his compatriot over a lack of opportunities.

Fernando Torres’ was arguably Europe’s leading forward at the peak of his powers at Liverpool, this performance one etched into the fans’ folklore after embarrassing Nemanja Matic to equalise following Cristiano Ronaldo’s opener.

Torres regularly proved a nightmare for the Serbia defender who was sent off three times in quick succession during fixtures against Liverpool, including this clash after hauling down Gerrard in the second half.

His performances waned following a brilliant three-season spell upon arriving from Atletico Madrid, Liverpool enjoying the best years of his career before a controversial and ill-fated move to Chelsea.