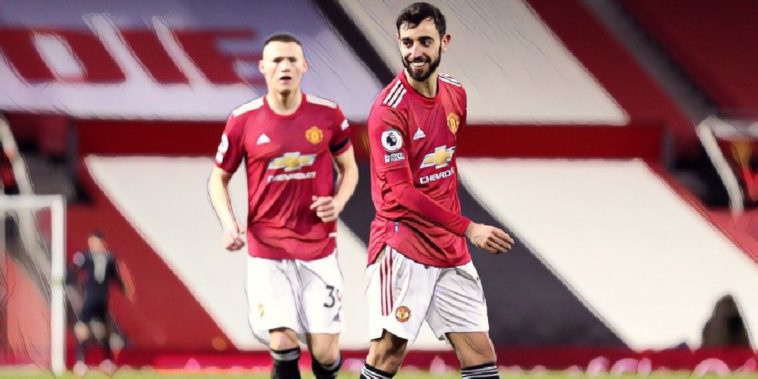 Manchester United’s win over Aston Villa at the weekend Sunday not only secured their place in this season’s top-four, it also saw star man Bruno Fernandes net his 25th Premier League goal for the club, following a stellar first full campaign for the Portugal international.

The midfielder netted a typically composed penalty just after the interval to draw United level and bring up his Red Devils milestone, placing him alongside some of the club’s greatest goalscorers in the modern era.

Here’s a look then at the six players to have taken the fewest number of appearances to reach 25 Premier League goals for Manchester United:

The current United boss was a relative unknown when he joined the club as a player from Norwegian side Molde in 1996, yet would leave the club 11 years later having developed into an undoubted Red Devils legend.

Having been plucked for a bargain price of just £1.5m, few expected the forward to make a real impact on the first-team, with the club at the time also pursuing Blackburn Rovers striker Alan Shearer.

While that transfer ultimately never came to fruition, it mattered little as Solskjaer settled quickly into life at Old Trafford, netting six minutes into his United debut against Rovers having come on as a second-half substitute, before going on to end the season as the club’s top scorer with 18 Premier League goals as they edged Newcastle United to the title.

That superb debut campaign was followed up a disappointing year for both the club and the Norwegian, as Arsenal clinched the double, with Solskjaer netting just six league goals in 22 appearances.

After having been linked with a departure from the club in the summer, the ‘Baby-faced Assassin’ would net his first goal of the 1998/99 campaign – and 25th Premier League goal – in a 2-2 draw with Chelsea, coming off the bench to equalise in the 86th minute.

That season would see United ultimately romp to an unprecedented treble, with Solskjaer writing his name into club and football folklore after netting that winner against Bayern Munich in the Champions League final.

While Solskjaer remains one of the club’s most astute signings in the Premier League era, the greatest coup has to be that of Eric Cantona, the Frenchman having been plucked from rivals – and then title holders – Leeds United in November 1992 for just £1.2m.

Still in search of a first league title under Alex Ferguson, United made a poor start to the maiden Premier League campaign, before the arrival of Cantona sparked a change in fortunes, with United going on to finish the season ten points clear at the top of the table.

That debut season at Old Trafford saw the former Marseille man end the season with a fairly modest nine league goals for the club in just 22 appearances, before going on to bag a much more impressive 18 top-flight goals the following season as United retained their title.

While he would then go on to miss the majority of the 1994/95 campaign, following a nine-month suspension as a result of his infamous ‘kung-fu’ kick at Selhurst Park, the enigmatic forward returned at the start of the following campaign to once again steer United to the title.

The club’s iconic number seven would go on to surprisingly call time on his playing career in 1997 at the age of just 30, after having helped the Red Devils to a fouth title in just five seasons, ending his Premier League spell with 64 goals for the club.

Read also – Eric Cantona and how he made us feel

While unfair comparisons have been made to the man above, there’s no denying the sensational impact that the Portuguese midfielder has made in his relatively brief United career.

Signed from Sporting CP in January 2020, the playmaker took no time at all to make his mark at Old Trafford, netting his first goal for the club from the spot against Watford, before playing a pivotal role in helping the club secure what had previously looked like an unlikely top-four finish

The former Udinese man ended the campaign with eight league goals in just 14 games, while he was also voted as the club’s Player of the Year, despite having only made his debut in early February.

After that stellar start to life in Manchester, the 26-year-old has kicked on again this season, netting 17 league goals to-date and registering 11 assists, while he’s also currently on a hugely impressive 27 goals in all competitions.

Although they’ve fallen short in the title race once again this season, Fernandes’ arrival has sparked hope that they are at least getting closer to challenging once more, the talismanic midfielder having inspired a real sea-change at the club in such a short space of time.

He will no doubt be looking to clinch his first piece of silverware at the club at the end of May, when Solskjaer’s United take on Villarreal in the Europa League final.

Another player who made a blistering start to life at the ‘Theatre of Dreams’ was Dwight Yorke, the former Trinidad international joined the club in 1998 having previously enjoyed a prolific eight-year stint at Aston Villa.

With the Red Devils looking to avenge conceding the title to Arsene Wenger’s Arsenal the year before, Ferguson brought in the Villa man to bolster an already fearsome attacking unit, alongside the likes of Solskjaer, Teddy Sheringham and Andy Cole.

Partnered with the latter man, the two forwards were simply superb in Yorke’s debut campaign for the Red Devils, striking up a seemingly telepathic partnership to propel the club to the title and the treble.

Together the destructive duo would plunder 35 league goals that season, with Yorke just edging his strike partner to finish as the league’s joint-top scorer, alongside Liverpool’s Michael Owen and Leeds United’s Jimmy Floyd Hasselbaink, while he would also finish the season as the leading goalscorer in the Champions League with eight goals – equal with Andriy Shevchenko.

The following campaign was even more fruitful for the lethal marksman, as he netted 20 league goals en route to yet another title, before departing the club in 2002, seeing out his career with spells at Blackburn Rovers, Birmingham City, Sydney FC and Sunderland.

While Man United have been blessed with a host of superb centre-forwards in the Premier League era, none have been quite as ruthless as Ruud Van Nistelrooy, the Dutchman a goal-obsessed centre-forward.

Having been forced to wait a year to join the club due to injury concerns in 2000, he eventually made the move from PSV Eindhoven a year later, making up for lost time by making an instant impact in English football.

With ‘Fergie’ allowing Teddy Sheringham to depart and slowly phasing out the likes of Yorke and Cole, Van Nistelrooy quickly became the club’s leading marksman, making the perfect start with a brace on his league debut against Fulham.

The former Heerenveen striker would go on to end that first campaign at the club with a stunning 23 league goals, as well as 10 Champions League goals, before bagging a further 25 top-flight goals the following season, a campaign in which he won his one and only league title with the club.

After netting 20+ goals in four of his five seasons at the club, the forward opted to join Real Madrid in 2006, ending his Red Devils career with 96 goals in exactly 150 league games, as well as 150 goals in 219 appearances in all competitions – only one of which was outside the box. An ultimate penalty box predator.

However, the man to make the most prolific impact at Old Trafford is Robin van Persie.

Off the back of netting 30 league goals in the 2011/12 campaign, the then Arsenal skipper rocked the footballing world with his surprise decision to leave the club, sparking the wrath of the Gunners faithful after opting to join rivals, Manchester United.

The Red Devils had suffered the agony of losing out on the title to neighbours Manchester City on goal difference on the final day of the previous season, with Van Persie – the club’s new number 20 – brought in with the sole purpose of delivering a 20th league title for the club.

The £24m signing bagged his first goal for United in a 3-2 win over Fulham, before registering his first hat-trick for the club in a memorable comeback win over Southampton.

Such electric form ultimately proved the difference as Ferguson’s men romped to the title, in what turned out to be the legendary manager’s final season at the helm, Van Persie finishing with 26 league goals to his name, including a stunning volleyed effort as part of a hat-trick against Aston Villa to help seal the title.

Manchester United secured their last Premier League title to date, with Robin van Persie hitting a sensational hat-trick against Aston Villa – including a strike that Sir Alex Ferguson labelled as the Goal of the Century! 💥🎯 pic.twitter.com/yHw2wxhOxF

After that stellar first season, the change in manager, as well as injury, appeared to impact the previously prolific striker, as he netted just 22 league goals in the next two seasons combined.

He would see out his playing days with a spell in Turkey with Fenerbache, before re-joining former club Feyenoord.