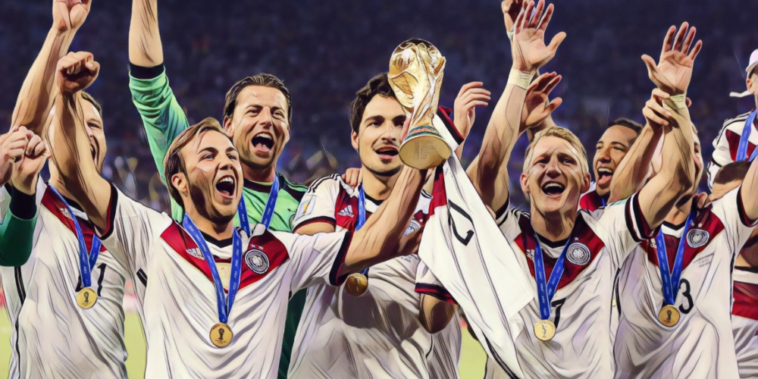 Germany are perennial contenders for World Cup success and were coronated as football’s finest side for a fourth time in 2014.

Joachim Low’s side became the first European team to win the trophy in South America, defeating Argentina in the final after extra-time. Their run had included that 7-1 thrashing of host nation Brazil in the semi-final, with Germany deserved winners of a memorable tournament.

We remember the Germany team that won the 2014 World Cup in Brazil.

The best goalkeeper in the tournament was a formidable last line of defence for Germany. He kept four clean sheets during their campaign, including in the final. Neuer was perhaps quieter than he might have expected in the decider, with the likes of Gonzalo Higuain and Lionel Messi off target with good chances for Argentina.

Neuer remains a giant presence, both figuratively and literally, for the national team and is the current captain of Germany. Just five players have ever won more than his 116 caps.

At club level, he continues to rack up the honours at Bayern Munich. The 36-year-old has won ten Bundesliga titles and two Champions League trophies among his honours since swapping Schalke for Munich in 2011.

Phillip Lahm captained Germany to World Cup success, before calling time on his decorated career with the national team following the tournament.

One of the greatest full-backs of all-time and a model of consistency, he was named in the Team of the Tournament in three consecutive World Cups, achieving the feat in 2006, 2010 and 2014.

He won 115 caps for Germany, scoring five goals, and impressed during the final win over Argentina as he was granted freedom down the right flank. Lahm was the first World Cup-winning captain for a reunified Germany, after Fritz Walter, Franz Beckenbauer, and Lothar Matthäus had skippered successful sides as West Germany.

Jerome Boateng underlined his status as one of Europe’s best centre-backs at the tournament, with the defender having excelled at Bayern Munich after leaving Manchester City.

Composed and calm, he produced a brilliant performance in the final win over Argentina, snuffing out danger whenever the South Americans threatened. Earlier in the tournament, he had faced his half-brother, Kevin-Prince, as Germany took on Ghana in the group stage.

The two had earlier become the first brothers to meet on opposite sides at the World Cup in 2010, before the teams were again drawn together four years later.

Mats Hummels was one of five Germany players named in the World Cup’s All-Star Team, following an impressive run of performances at the tournament. He was named on the 10-man shortlist for FIFA’s Golden Ball award for the tournament’s best player, eventually won by Lionel Messi.

Hummels was the difference in the quarter-final win over France, scoring the decisive goal with a superb header and contributing to the German’s clean sheet. A knee issue hampered his final and he was isolated on occasion, but dug in to earn another shut-out that saw Germany crowned champions.

The 33-year-old has won 76 caps for Germany, but was overlooked for a place in their 2022 World Cup squad.

Benedikt Howedes deputised in an unfamiliar left-back role in the final and on occasion appeared a central defender pushed into a wide position.

He was booked for a reckless lunge on Javier Mascherano, while he came close to opening scoring after crashing a header against the post. Howedes was one of just three players to play every single minute of the tournament for the champions, the highlight of an international career that resulted in 44 appearances.

The defender spent most of his club career with Schalke, before short spells with Juventus and Lokomotiv Moscow. He retired from the game in 2020, aged just 32.

Arguably Germany’s most influential player in the final, Schweinsteiger led by example with a performance of heart and control in midfield.

The world champion’s football flowed through Schweinsteiger, whose bloodied face in the final stages at Rio de Janeiro’s Maracana stadium will be one of his enduring images. Blood, sweat and German grit helped Joachim Low’s side over line with Schweinsteiger at the centre of that success.

One of the most decorated players in the history of Bayern Munich, it was arguably his final stand at the top level. Injuries decimated his latter career after leaving Bayern in 2015 for short spells at Manchester United and Chicago Fire.

Christoph Kramer was a surprise selection for the final, drafted into the team just minutes before kick-off after Sami Khedira was injured in the warm-up.

He began impressively, but suffered misfortune of his own after a nasty head collision saw him leave the field on the half-hour. André Schurrle was introduced as his replacement.

Kroos was one of the finest footballers on show at the finals and orchestrated Germany’s impressive run through the knockout stages.

He was the architect of the 7-1 thrashing of Brazil in in Belo Horizonte, scoring twice and creating countless openings with moments of invention in possession. Kroos featured in all but a few seconds of Germany’s triumphant campaign, with his ability crucial to the champion’s possession-dominant brand of football.

🇩🇪 @ToniKroos has announced his retirement from international football

💫 The 2014 #WorldCup winner produced some special moments on the biggest stage for @DFB_Team_EN pic.twitter.com/ikeejAhrkl

He was, however, fortunate to escape without punishment after his headed back-pass sent Gonzalo Higuain through on goal in the final. Kroos breathed a huge sigh of relief after the Argentina forward skewed his effort wide of the post.

Thomas Muller was the breakthrough star of the 2010 tournament, as he scored five goals to win the World Cup’s Golden Boot and Best Young Player Award.

Four years later, Muller delivered on the big stage again. He hit a hat-trick as Germany thrashed Portugal 4-0 in their group stage opener before scoring the winner in a 1-0 win over the United States.

His outstanding movement in forward areas was a feature of Germany’s football, as he ended the World Cup with five goals and three assists. One of the best players of his generation, Muller – the Raumdeuter for club and country – is the most decorated German player of all time and holds the record for the most Bundesliga assists.

Ozil was given a roaming role from the left after an injury ruled Marco Reus out of the tournament and was an influential figure in Germany’s success.

He ended the tournament with the most passes completed in the final third (171), was second for possession won in the final third (6) and ranked joint-second for chances created (17). Ozil’s most notable contribution came in the last-16 win over Algeria, as he scored the decisive goal in extra-time.

The midfielder – who was Germany’s leading scorer in qualification for the tournament – scored 23 goals in 92 appearances for the national side. He retired from international football in 2018, having opened up on issues with DFB president, Reinhard Grindel, over alleged racism and disrespect due to his Turkish-German background.

Miroslav Klose made history at the 2014 World Cup, as he became the greatest goalscorer in the tournament’s history.

Klose had starred during three previous World Cup appearances, having scored five goals at his debut tournament in 2002. He then won the Golden Boot as Germany hosted the 2006 World Cup, before adding a further four goals in 2010.

The forward scored twice during Germany’s success in 2014, with his second goal – coming in the 7-1 thrashing of Brazil in the semi-final – taking Klose past Ronaldo Nazario’s record of 15 World Cup goals.

Poacher, instinctive finisher, fox in the box, he's the most prolific goalscorer in #WorldCup history.

Schurrle was introduced in the first half after Christoph Kramer was forced off with a head injury. He forced a fine save from Sergio Romero, before teeing up the winning goal with a pass into Mario Gotze.

He had scored three goals during Germany’s run to the final, netting in the last-16 win over Algeria and a brace as Brazil were thrashed in the last four.

At club level, Schurrle won the Premier League title during an 18-month spell at Chelsea, before returning to Germany to sign for Wolfsburg. After a decline in fortunes he called time on his career in 2020, aged just 29.

Mario Gotze was sent on with the task of winning the World Cup for Germany and delivered with a stunning strike to decide the game in extra-time.

The bright young talent of German football was introduced with minutes remaining of normal time and entered the field with words of encouragement from his head coach.

“I said to Götze ‘OK, show the world you are better than Messi and can decide the World Cup’,” Löw revealed afterwards.

Gotze’s goal was a glorious moment, as he chested down Schurrle’s cross before lashing home the winner. It was a moment that was expected to kick-start a long career at the top, but the midfielder has since had to deal with injury problems and a metabolic disorder which derailed his career.

He won five league titles across spells at Borussia Dortmund and Bayern Munich, but failed to reach the heights once expected. Now at Eintracht Frankfurt, he earned a surprise call-up to the Germany squad for the 2022 World Cup, five years after his last appearance for the national side.

The towering defender was brought on in the final seconds of extra-time, as Germany wound down the clock to become world champions.

Mertesacker won 104 caps during a decade with the national side and retired following their World Cup triumph in Brazil. His best club football came at Werder Bremen and Arsenal, with the centre-back winning three FA Cups and later captaining the Gunners.

He is currently the Arsenal academy manager after calling time on his playing career.