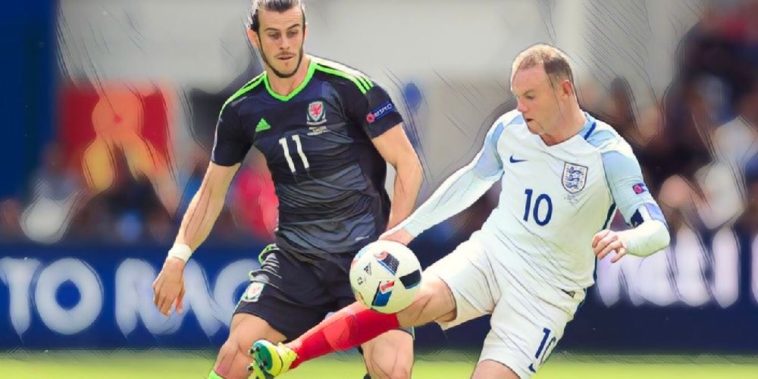 England take on Wales in a World Cup Battle of Britain this evening, as the neighbouring nations go head-to-head in Group B.

Gareth Southgate’s side can progress as group winners with a win, with only a defeat by four or more goals enough to eliminate the Three Lions and send Wales through instead.

It will be the second time in four major tournaments that the teams have met, following a memorable encounter at Euro 2016. Wales took the lead through Gareth Bale’s free-kick, before England fought back to score a stoppage-time winner and seal all three points.

Ahead of tonight’s meeting, we remember the England XI that beat Wales at Euro 2016.

Hart spent several years as England’s undisputed number one, but lost his first-choice status soon after Euro 2016. Roy Hodgson’s side were eliminated in embarrassing fashion by Iceland in the last 16, with Hart at fault for the winning goal.

He had made an earlier blunder during the win over Wales in the group stage, as Gareth Bale’s free-kick deceived the goalkeeper to hand Chris Coleman’s side the lead. Hart won 75 caps for England, but did not feature for the Three Lions after 2017.

The 35-year-old currently plays his club football with Celtic, where he won the Scottish Premiership in 2021/22.

Kyle Walker is one of seven players in the current squad who remain from Euro 2016, with the right-back having spent a decade as a regular in the England side.

Walker was an impressive performer in the win over Wales as he dominated his duels on the right flank.

He has won 70 caps for the Three Lions and formed part of the squad that reached the World Cup semi-final in 2018 and the final of Euro 2020, where his performances earned him a place in the Team of the Tournament..

At club level, he left Tottenham to sign for Manchester City in 2017 and has since enjoyed a decorated career at the Etihad. He has won nine major honours, including four Premier League titles.

Gary Cahill made his debut for England under Fabio Capello and went on to feature in four major tournaments for the national side. The centre-back featured in every minute of England’s ill-fated Euro 2016 campaign and captained the side during the group stage draw with Slovakia in Wayne Rooney’s absence.

He was also included in the squad that reached the semi-final of the 2018 World Cup, but made just one appearance. Cahill called time on his international career following the tournament, having scored five goals in 61 appearances for England.

Chris Smalling was named in the squad for Euro 2016 and scored his first international goal during a pre-tournament friendly win over Portugal at Wembley.

He had been named as Manchester United’s Players’ Player of the Year in 2015/16, but saw his international career curtailed soon after England’s exit from the European Championship. Gareth Southgate was named as Roy Hodgson’s successor and decided on centre-backs with greater ability on the ball moving forward.

Despite some impressive performances for Roma since leaving the Premier League, the now 33-year-old Smalling has been unable to add to his 31 caps. His last appearance for England came in 2017.

Rose made his debut for England in the build-up to Euro 2016, appearing for the first time in a 3-2 friendly win over Germany in March.

He started three of England’s four games at the tournament, having been named in the PFA Team of the Year for the 2015/16 campaign. Rose remained a regular with England and featured at the 2018 World Cup, where Gareth Southgate’s side reached the last four.

Rose won the last of his 29 caps in 2019 and the 32-year-old is without a club after leaving relegated Watford during the summer.

Eric Dier broke into the side for club and country in a midfield anchor role, before moving back to a centre-back position.

Having made his debut in November 2015, he was included in the squad that travelled to France and scored England’s first goal of the tournament with a free-kick against Russia.

Eric Dier with a 🚀

Dier – who has won 48 caps – also scored the decisive penalty in the shootout win over Colombia at the 2018 World Cup, England’s first success on penalties in a competitive fixture since Euro ’96.

He was recalled to the England squad after an 18 month absence in September 2022 and is part of  Gareth Southgate’s squad in Qatar this winter.

Dele Alli’s star was one firmly on the rise in the summer of 2016, as he travelled to the European Championship as England’s bright young talent. An impressive debut season at Spurs had seen Alli named as the PFA Young Player of the Year, an accolade he retained the following season during a meteoric rise from MK Dons to the world stage.

Alli featured for England at the 2018 World Cup two years later, but has since seen his career perform a startling nosedive. It’s been a staggering fall from grace for Alli, who has not featured for the Three Lions since 2019.

Having been ushered out at Spurs earlier this year, he struggled to make an impact at Everton before departing on loan for Besiktas last summer.

Wayne Rooney captained England at Euro 2016, in what proved an unhappy farewell to the international stage for the Three Lions’ record goalscorer.

Rooney had moved into a central midfield role for Roy Hodgson’s side during the tournament and scored the opening goal during the infamous loss to Iceland in the last 16.

Rooney announced his retirement from international football in August 2017, having scored a record-breaking 53 goals in 119 appearances. He made one further appearance against the United States in November, in order to promote The Wayne Rooney Foundation. No outfield player has ever made more appearances for the national side.

England’s most impressive performer among the attacking contingent against Wales, Lallana was a favourite of Roy Hodgson during his reign as the Three Lions manager.

Lallana won 34 caps at international level and was named as England’s Player of the Year in 2016. Injury problems began to impact his influence for club and country however, and after six seasons at Liverpool, he signed for Brighton on a free transfer in 2020.

The 34-year-old has since made 67 appearances for the Seagulls, scoring twice.

Raheem Sterling has spent a decade in the England side after making his debut, aged just 17, against Sweden in 2012.

Sterling initially struggled to turn promising performances into end product for England, but has since developed into a go-to man under Gareth Southgate’s management. He has scored 20 goals in 81 appearances for the Three Lions and was excellent during the run to the final of Euro 2020, in which he scored three goals and was named in the Team of the Tournament.

Aged 21, he failed to make an impact at Euro 2016 and was substituted at half-time of the win over Wales after a disappointing performance.

Harry Kane travelled to Euro 2016 after a fine first full season as a Tottenham regular, in which he scored 25 league goals to win the Premier League’s Golden Boot for the first time.

Kane’s designation as corner kick taker was criticised during the finals in France, in what proved a disappointing and goalless first major tournament.

He travelled to the 2018 World Cup as captain and became just the second Englishman to win the tournament’s Golden Boot, as he scored six goals during England’s run to the last four.

Kane has scored 51 goals in 77 appearances for England and is now within two goals of matching Wayne Rooney’s all-time record.

Jamie Vardy came off the bench to turn the game around for England, scoring one and creating another after replacing Harry Kane at the break.

Vardy had inspired Leicester to the Premier League title during the 2015/16 season, but had to be content with an understudy role to Kane. He took his chance in fine fashion against Wales, however, turning home an equaliser from close range to bring England level.

His best moment in an England shirt? @vardy7 @England pic.twitter.com/m4ksyHc0pg

He scored seven goals in 26 appearances for the Three Lions, before calling time on his international career after a lack of consistent opportunities.

England’s match-winner, Sturridge came off the bench to snatch the points in dramatic fashion against Wales.

On as a substitute for Raheem Sterling at half-time, his cross led to Vardy’s equaliser before he drove into the penalty box to collect a return pass and prod home a winner.

Sturridge was viewed as one of England’s most exciting options at his best, but persistent fitness issues plagued his career. He made just 34 league starts for Liverpool across five seasons, following a brilliant 2013/14 campaign in which he finished as runner-up for the Premier League’s Golden Boot.

Marcus Rashford was the youngest member of England’s Euro 2016 squad, having burst onto the scene with an exciting emergence at Manchester United.

Few outside of the club had heard of Rashford before his debut double against FC Midtjylland in February 2016, a performance which was followed with another brace on his Premier League bow against Arsenal.

Eight goals in 18 games across the second half of the season earned Rashford an England call-up, where he became the youngest Englishman to score on his international debut against Australia in a Euro 2016 warm-up friendly.

He has scored 13 goals in 48 appearances for the Three Lions and is part of the current squad in Qatar, where he scored in the 6-2 group stage win over Iran.