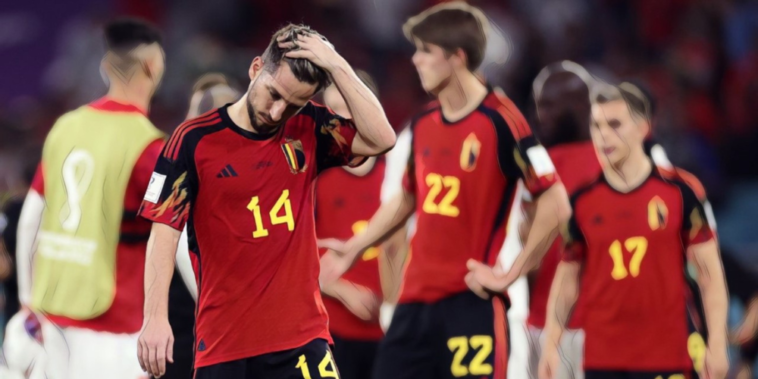 Following the second fixtures for all 32 teams, we look at five talking points from the Word Cup action.

Fasten up your seatbelts and prepare for the second instalment of Ghana against Uruguay.

A little more than a decade ago, the two teams faced off in a 2010 World Cup quarter-final that saw the birth of an unlikely rivalry. In South Africa, Ghana were the bidding to become the first African team to reach the last four in the first tournament staged in Africa.

With penalties looming, Luis Suarez found himself at the centre of World Cup controversy. The forward punched clear a goal-bound effort in the final seconds, with Suarez sent off and Ghana awarded a penalty.

It all comes down to Uruguay vs. Ghana on the final match day 👀🍿 pic.twitter.com/pLF0KwEpaK

Asamoah Gyan blew his chance as he blazed the spot-kick against the crossbar, and Suarez – pictured celebrating wildly from the touchline as he stalled heading down the tunnel – became public enemy number one in Ghana as Uruguay triumphed in the resulting shootout.

The two teams will go head-to-head for a place in the last 16 this week, with the veteran Suarez remaining a part of Uruguay’s challenge. The South Americans have disappointed so far and must-win against Ghana in a clash poised perfectly for drama.

The stage is set for part two of a fascinating international rivalry.

The bubble of excitement that came with England’s 6-2 thrashing of Iran took just days to burst, as a turgid performance against the USA provided a reality check for the Three Lions.

Gareth Southgate’s side were dull and dreary, a world away from the front-footed approach against Iran. Harry Maguire passed to John Stones. John Stones passed back to Harry Maguire. The dual eights of Jude Bellingham and Mason Mount struggled for involvement. Declan Rice was overran. Raheem Sterling was anonymous. Phil Foden must have wondered just what he has to do for a chance to impress.

If Southgate’s conservatism was designed to contain, it failed. England were second best for long periods and fortunate to survive the counterattack on occasion. How the Three Lions bounce back will determine their campaign.

Fans will not want the performance against the USA to lead to greater caution. There has been criticism over Southgate’s use of a back three in the past, but it would come as little surprise to see it return against a Wales team who operate with a similar system.

12 – Tonight was England's 12th goalless draw at the World Cup; the most of any team in the tournament's history. Grind. pic.twitter.com/r3ZcdsWJfg

Which is the real version of Southgate’s side? The England that struggled against the USA and so desperately during the Nations League? Or the one who blew apart Iran in one of the team performances of Qatar so far? The answer, as ever, perhaps lies muddied in between.

Just minutes from a second straight group stage elimination, Germany needed a saviour. It came from an unlikely source, as Niclas Fullkrug came off the bench to rescue his side against Spain.

Fullkrug was never expected to gatecrash Germany’s squad for this tournament. Before this month, the 29-year-old had never been capped for the national side and before this season had reached 10+ goals in just one Bundesliga campaign.

Niclas Fullkrug didn't make his Germany debut until 11 days ago at the age of 29.

He was playing second-tier football last season with Werder Bremen.

After firing Werder Bremen back into the Bundesliga last season, Fullkrug has began the new campaign in superb form. His ten goals in 14 league appearances are bettered by only Christopher Nkunku and earned the centre-forward an international call. Germany’s oldest debutant for more than two decades, he marked his first appearance with a goal against Oman in a pre-tournament friendly and this week ensured Hansi Flick’s side avoided an early elimination in Qatar.

His towering frame added a new dimension to the Germany attack against Spain, bringing much-needed presence to a forward line that has struggled to fire. Kai Havertz and Thomas Muller have failed to fit at number nine and Fullkrug showed the benefit of a genuine centre-forward.

Fullkrug’s fantastic finish earned a draw with Spain, as he gave Unai Simon no chance with a thumping effort. Germany next face a must-win clash with Costa Rica and Fullkrug will hope to have done enough to earn a start. Could there be shades of Salvatore Schillaci as the Bremen battering ram looks to seize his unlikely chance?

Antoine Griezmann has been a constant in France’s best moments of the past decade. A favourite of manager Didier Deschamps, he was called one of the ‘greatest players of all-time both in Europe and worldwide’ by Deschamps during Euro 2020.

Just five players have ever made more appearances for France and just two have scored more than Griezmann’s 42 goals for Les Bleus. He was the tournament’s leading scorer as France reached the final of Euro 2016 on home soil, before earning the Bronze Ball and Silver Boot as the French were crowned world champions in Russia two years later.

Most Expected assists accumulated in the first two rounds at #Qatar2022:

Griezmann has also created 5 big chances so far — no one else created more than 2.#FIFAWorldCup pic.twitter.com/gmZh3Nnpi3

In Qatar, he is delivering in a major tournament once again. Granted freedom in a role behind the two forwards, he has flourished. No longer the player tasked with deciding games, he is the architect to create chances for those that are. France booked their place in the last 16 with a 2-1 win over Denmark and it was Griezmann who created the winner, delivering a perfect ball to the back post for Mbappe to bundle home.

He is creative and calculated, drifting towards the ball in a bid to make things happen. It has been fascinating to watch his new role, part ten and part midfield runner, never shirking his off-the-ball work despite his best moments coming in possession.

After the nonsense at club level that saw him become a pawn in the financial game between Atletico Madrid and Barcelona, it has been a welcome sight to see Griezmann shining on this stage again.

Belgium’s so-called Golden Generation are on the verge of an embarrassing early exit. Ranked behind only Brazil heading in the tournament, the Red Devils now face a must-win clash with Croatia to be assured of their place in the knockout rounds.

Roberto Martinez’s side scraped past Canada before a 2-0 loss to Morocco, with their talented side appearing aged and at the end of its cycle. After the high of a third-place finish at the 2018 World Cup, the current version appears several levels below that team and unlikely to make an impression in Qatar.

Kevin De Bruyne’s pre-tournament prediction appears to be coming true. There are those unhappy with the midfielder’s comments on Belgian’s ageing side, but it is a theory difficult to dispel on the evidence of their campaign so far.

“No chance,” De Bruyne said when The Guardian asked him whether Belgium could win the 2022 World Cup. “We’re too old. Our chance was in 2018. We have a good team, but it’s ageing. We lost some key players. We have some good new players coming, but they’re not at the level other players were in 2018.”

Yesterday, Kevin De Bruyne said that Belgium are ‘too old’ to win the World Cup.

This is what Jan Vertonghen had to say after Morocco held them scoreless in a 2-0 win today 😳 pic.twitter.com/4CLHh9oql6

Jan Vertonghen, Toby Alderweireld, Axel Witsel and Dries Merterns are no longer the players of old. Eden Hazard is a shadow of the star he was in the Premier League. Romelu Lukaku has struggled for fitness this season. Even Thibaut Courtois, perhaps the one world-class player who remains at his peak alongside De Bruyne, made a terrible mistake in the Morocco defeat.

It’s win or bust against Croatia for Belgium, but even that looks unlikely to alter the narrative that their ‘Golden Generation’ is set to pass without tournament success.