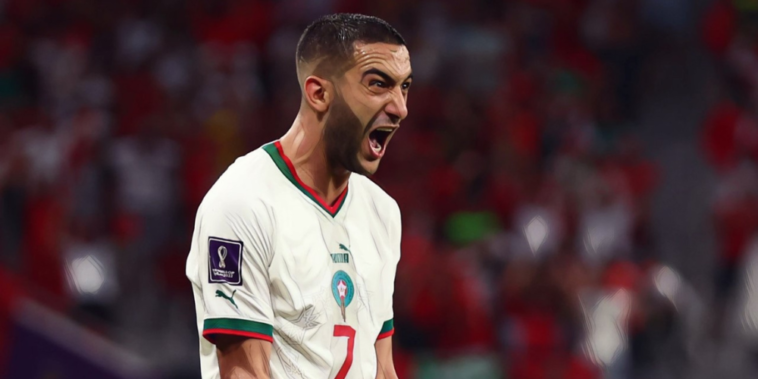 After two rounds of group stage games at the 2022 FIFA World Cup we’ve decided to check in on the Premier League representation at the tournament.

Here are five Premier League names who impressed on Matchday 2.

Hakim Ziyech has had a difficult period for club and country, with the winger having struggled to secure minutes at club level with Chelsea.

The 29-year-old has started just one league fixture for the west Londoners this season, but provided a reminder of his creative class with a man-of-the-match performance as Morocco upset Belgium.

Ziyech was in brilliant form as Morocco secured a 2-0 win over the number two ranked side in the world, providing a constant threat with his ability to fashion chances from set-pieces and open play. He had a goal ruled out after his free-kick eluded Thibaut Courtois, with Roman Saiss adjudged offside. Morocco continued to keep the pressure on, however, and Ziyech teed up Zakaria Aboukhlal for a late second after Abdelhamid Sabiri’s opener.

In February, Hakim Ziyech retired from Morocco duty after he was left out of their AFCON team.

Today he put in a MOTM performance to help his nation to a historic win 👏 pic.twitter.com/pCSjn1p7Bp

It was a brilliant moment for Ziyech, who had retired from international football earlier this year after a fall-out with head coach Vahid Halilhodžić. The Bosnian’s sacking has since seen Ziyech return to the side and he has provided the top-level quality that has placed Morocco in with a strong chance of group stage progress.

Bruno Fernandes’ brace secured Portugal’s passage into the knockout rounds, with the midfielder scoring both goals in his side’s 2-0 win over Uruguay.

Fernandes had created two goals during Portugal’s opening win over Ghana and has now been involved in four goals across two World Cup fixtures. Only Kylian Mbappe (4) can match that total, with Fernandes having found his groove around goal for the national side.

It’s now seven goals in his last 11 appearances for Portugal, having scored just six across his first 40 caps at international level. Portugal have navigated a tricky group in fine fashion to date and a side increasing in confidence will want to assure progress as group winners, with Brazil the likely opponents for the runners-up in Group H.

Cristiano Ronaldo might remain the star name in the Portugal side, but it is Fernandes leading their charge to date. He broke the deadlock against Uruguay as his cross eluded everyone – despite Ronaldo’s protests otherwise – before deciding the contest with a controversial late spot-kick. He then came close to a hat-trick, after striking the post in the final seconds.

Croatia took control of Group F after coming from behind to thrash Canada, securing a 4-1 win that eliminated their opponents from the World Cup.

The creative centre of the 2018 runners-up controlled proceedings against the Canadians, with Mateo Kovacic producing a masterclass in midfield.

Kovacic led the contest for chances created (4), successful tackles (5) and ball recoveries (9), while he completed a huge 93% of his passes and 100% of his attempted dribbles. At his best there are few midfielders who can compete with Kovacic’s wide-ranging attributes, with the Chelsea midfielder brilliant in both winning and progressing possession.

1990 – Mateo Kovačić made five tackles and created four chances against Canada, while maintaining a passing accuracy of 93%; the last player to match or surpass each stat in a single World Cup game was Lothar Matthäus for Germany against Yugoslavia in 1990 (6/5/95%). Gazelle. pic.twitter.com/c3wGDUoPgH

Croatia’s midfield trio of Kovacic, Luka Modric and Marcelo Brozovic is as good as any at the tournament, an engine room that combines commendable tenacity with technical brilliance.

England were held to a goalless draw by the United States, with the Three Lions second best for long periods against Gregg Berhalter’s side.

England failed to match the intensity of the Americans and the efforts of the USA were led by captain Tyler Adams. The midfielder has become an instant favourite at Leeds this season, with his relentless work-ethic and combative streak appreciated at Elland Road.

Adams was at the centre of the USA’s impressive performance against England, providing an assured presence at the base of the midfield and making a number of important interceptions to get his side on the front foot.

He won 100% of his tackles and aerial duels, in a tireless performance that stifled England’s creative talents. Mason Mount and Jude Bellingham struggled to influence proceedings for Gareth Southgate’s side, as Adams and former England youth international Yusuf Musah dominated the centre of the pitch.

Casemiro booked Brazil’s place in the knockout rounds with a brilliant late winner against Switzerland.

The tournament favourites had been below-par in an underwhelming performance against the Swiss, before Casemiro’s stunning strike – lashed in on the half-volley with just eight minutes remaining – decided the contest.

It was the highlight of another strong performance from the Manchester United midfielder, whose anchor role will be crucial to Brazil’s hopes of being crowned champions. After a performance of control against Serbia, he again shielded a Brazilian backline which has failed to conceded a shot on target across their opening two fixtures.

Casemiro was central to Brazil’s regaining and recycling of possession and could have had an assist after a perfectly-weighted pass released Vinicius Junior in behind. His former Real Madrid teammate finished in fine fashion, but the goal was disallowed after Richarlison was deemed offside in the build-up.