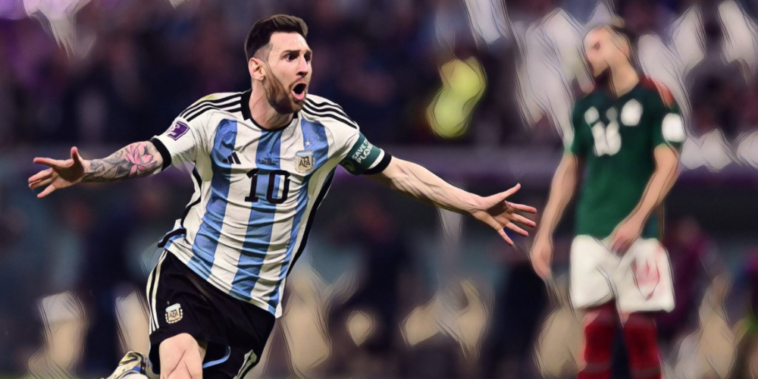 Our World Cup awards honour the best – and worst – of the action from the second round of fixtures in Qatar.

Lionel Messi has carried the weight of expectation for Argentina for much of his career, but rarely has that weight felt heavier than this week’s clash with Mexico. A shock defeat to Saudi Arabia had left Argentina with little room for error against their old rivals and La Albiceleste looked to their leading light for inspiration as a cagey game threatened to slip away.

With just over an hour gone, the moment came. Angel Di Maria’s pass inside found Messi, whose first touch opened up the shooting chance. Unleashed from the edge of the area, it was inch-perfect precision from the Ballon d’Or winner to give the diving Guillermo Ochoa no chance.

Messi is now the youngest AND oldest player to score and assist in a World Cup game 🍷🐐 pic.twitter.com/AHwVpjmmMU

Relief swept across the South Americans, who made sure of the win as Messi teed up Enzo Fernandez for a second goal three minutes from time. Their status among the pre-tournament favourites had been questioned following their Saudi setback, but Messi’s magic might just have kick-started Argentina’s campaign in Qatar. In what will be his last World Cup, Messi’s mere presence provides hope for his side.

An honourable mention goes to this touching moment between Achraf Hakimi and his mother, after Morocco caused the latest shock of the 2022 World Cup by beating Belgium.

Achraf Hakimi celebrating with his mother after Morocco's win against Belgium is everything ❤️🇲🇦 pic.twitter.com/GgAaM0nXl6

The controversial decision to host this tournament in Qatar means there is no shortage of stories that must be covered elsewhere, but Hakimi’s heartwarming celebration was a reminder of what the World Cup is supposed to be about. It is the sort of moment we wish this tournament was truly about.

Are France now the favourites?

No team has defended the World Cup since 1962, but France look capable of ending that record after securing their place in the knockout rounds with a game to spare. Back-to-back wins have seen Aurélien Tchouaméni excel in the absences of Paul Pogba and N’Golo Kante, while Antoine Griezmann is revelling in a marauding midfield position.

The star attraction, however, is Kylian Mbappe. It’s now three goals for Mbappe who leads the race for the Golden Boot, after the forward’s match-winning double downed Denmark and booked France’s place in the last 16.

Leaders after two matchdays of the 2022 #FIFAWorldCup.

Denmark were unable to live with Mbappe’s frightening speed, as the 23-year-old provided France with a menacing outlet on the left. Mbappe is the sort of footballer who makes supporters rise from their seats in anticipation and he produced another scintillating showing this week.

Defenders are terrified to challenge Mbappe who appears near untouchable when driving at pace, while his three goals to date have demonstrated his poacher’s instincts. Named as the World Cup’s Best Young Player four years ago, he might just claim the senior prize this time around.

Vincent Aboubakar was the hero of Cameroon’s AFCON campaign earlier this year, winning the tournament’s Golden Boot as the Indomitable Lions reached the last four on home soil.

Rigobert Song has oddly overlooked the forward during the World Cup so far, but Aboubakar sent a statement to the Cameroon coach with a game-changing performance from the bench against Serbia.

The 30-year-old scored one and created another as Cameroon fought back to rescue a 3-3 draw, with his goal a moment of pure invention.

The biggest footballing scoop since Piers Morgan got that interview.

Piotr Zielinski had given Poland a first-half lead, before Saudi Arabia were handed the chance to level from the penalty spot just five minutes later.

Wojciech Szczesny produced a sensational piece of goalkeeping to deny the Green Falcons, as he kept out Salem Al Dawsari’s effort from the spot before making a brilliant block to prevent Mohammed Al Burayk from burying the rebound.

The former @Arsenal keeper makes an impressive double save from a Saudi Arabia penalty ⛔️ pic.twitter.com/ZICLXLBU4h

It was superb goalkeeping from the Juventus shot-stopper, as Poland look to book their place in the knockout rounds for the first time since 1986.

For all the attacking talent at Brazil’s disposal, it might just be the Selecao’s defence that provides the foundation for their challenge in Qatar.

0 – #Brazil 🇧🇷 have become in just the second nation to not face a single shot on target in their first two #WorldCup games in a single edition after France in 1998 (2 games) since 1966. Unbreakable. pic.twitter.com/wPpJWlmedh

Is this the end for Belgium’s Golden Generation?

Roberto Martinez’s side are on the brink of World Cup elimination following a shock defeat to Morocco, one which leaves the Red Devils in need of a result against group leaders Croatia.

Kevin De Bruyne has been criticised for his comments on Belgium’s chances, in which the midfielder – ineffective so far this tournament – called the national side ‘too old’ to challenge in Qatar.

It is difficult to disagree with De Bruyne after Belgium’s ageing side were beaten by Morocco, having been fortunate to edge past Canada in their opening fixture.

7 – Belgium have lost seven of their last 19 matches in all competitions (W9 D3), as many defeats as they’d suffered across their previous 74 games combined (W57 D10). Alarming. pic.twitter.com/4c3WzLI6DJ

Four years ago Belgium lost a hard-fought semi-final to eventual champions France and that appears to have been the best chance for this team to win a major tournament. The current version are a pale imitation of that side and one who have struggled in Qatar despite their FIFA ranking of number two in the world.