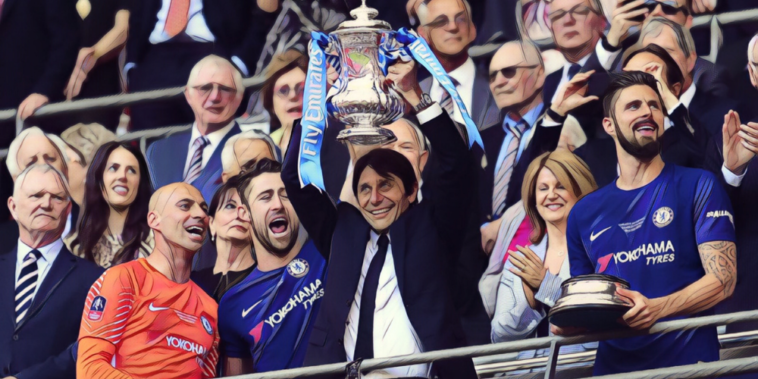 Antonio Conte has made his return to the Premier League after replacing Nuno Espirito Santo at Tottenham Hotspur, with the Italian hoping to emulate his previous success in English football at London rivals Chelsea.

After replacing Jose Mourinho in the summer of 2016, Conte guided Chelsea to the league title during his debut campaign, before adding an FA Cup success the following season in what proved his last at Stamford Bridge.

That showpiece victory over Manchester United, which came courtesy of an Eden Hazard penalty, proved Conte’s final game in charge, as he was sacked soon after as Chelsea missed out on Champions League qualification following a fifth-place finish.

To mark his return to the Premier League, we look at that starting XI that won at Wembley back in May 2018.

The bedrock of the club’s success in the 21st Century has been having a top-class goalkeeper in place, from Petr Cech in the early 2000s to current star Edouard Mendy, with Thibaut Courtois another stellar talent to have blessed the goalkeeping ranks.

Signed from Genk in 2011, the Belgium international spent the first three years of his Chelsea career on loan at Atletico Madrid, notably winning the La Liga title during the 2013/14 campaign, before emerging as a first-team regular in west London under Mourinho in 2014.

Acorss the next four seasons he established himself as one of the best goalkeepers in world football and was pivotal to the title successes under both Mourinho and Conte, winning the Golden Glove in the 2016/17 season after claiming 16 clean sheets.

Like his manager, his time at the club ended with another shutout in the FA Cup final, as he made the switch to Real Madrid in the summer of 2018 after an impressive display at the World Cup in Russia.

Cesar Azpilicueta was vital to the success enjoyed by Conte during his time with the club, with the Italian converting the Spaniard into a hugely effective presence on the right of a back three.

A dismal drubbing at the hands of Arsenal early into Conte’s debut campaign led to the switch in formation, one which would ultimately spark their title charge with Azpilicueta showcasing his versatility after converting from his usual full-back role.

In a decade of lavish spending and superstar arrivals, there has perhaps been no more astute signing at Stamford Bridge than that of the former Marseille man, who signed for a reported fee of just £7m and has since gone on to make over 400 appearances for the club.

That nine-year spell has seen the 32-year-old win two league titles, two Europa League trophies, an FA Cup and the Champions League, with it likely that he will once again be pivotal to any success that the club enjoys this season.

An unsung hero for so long at Chelsea, Gary Cahill featured heavily during Conte’s time at the club, making 37 Premier League appearances in the 2016/17 campaign and finishing the season in the PFA Team of the Year.

The departure of John Terry the following season saw Cahill named club captain, with the centre-back the man with the honour of lifting the trophy at Wembley after the narrow 1-0 victory, in which he was a defensive rock at the back.

His time at Stamford Bridge came to an end in 2019 after eight hugely successful years at the club, with Cahill having since gone on to enjoy two strong seasons at Crystal Palace, before joining Championship side Bournemouth on a free transfer in the summer – where he continues to impress at the age of 35.

One of the few players still at the club, Antonio Rudiger has endured some frustrating periods in English football, but on current form has emerged as one of the best defenders in Europe, having been reborn following the arrival of Thomas Tuchel in January.

It’s perhaps no coincidence that his best football in a blue shirt has come under Conte and Tuchel, two managers who favour a back three/back five, with that tactical set-up allowing the German defender the freedom to showcase his knack for a rampaging forward run.

A key cog in last season’s European triumph after falling out of favour under Frank Lampard, the former Roma defender proved impressive during Conte’s tenure, having joined the club in the summer of 2017.

The biggest beneficiary of Conte’s tactical tweak was the formerly outcast Victor Moses, with the former Nigeria international having been transformed into a hugely effective presence at right wing-back, after appearing surplus to requirements prior to the Italian’s arrival.

Having joined the club from Wigan Athletic in 2012, the versatile winger spent much of his early Blues career out on loan – notably joining Liverpool for the 2013/14 season – before developing into a firm fixture of the starting XI in the 2016/17 campaign.

His regular involvement continued into the following season, before the arrival of Maurizio Sarri in 2018 – and the inevitable change of system – hampered his game time, with Moses going on to spend the next few seasons out on loan at Fenerbache and Inter Milan, where he reunited with Conte.

After another temporary switch to Spartak Moscow in 2020, the 30-year-old signed for the Russian side on a permanent basis and recently impressed against Leicester City, both home and away, in the Europa League.

While the partnership of N’Golo Kante and Nemanja Matic was heavily favoured in Conte’s debut campaign, Cesc Fabregas remained a valued squad member nonetheless, featuring more frequently following the latter’s surprise departure for Manchester United in the summer of 2017.

The Spaniard had previously been integral to the 2014/15 league title success under Mourinho, forging a telepathic understanding with compatriot Diego Costa after joining from Barcelona at the start of the campaign.

That would prove to be a contentious switch owing to his previous Arsenal connection – having spent eight years in north London – though he would develop into a hugely popular figure at Stamford Bridge, before departing for Monaco in 2018.

The World Cup-winning midfield maestro still plies his trade for the Ligue 1 side, albeit in a bit-part role.

Alongside the move to a back three, the arrival of N’Golo Kante was arguably the most important factor in the 2016/17 title success, as well as the FA Cup triumph a year later, with the Frenchman putting in a man of the match display at Wembley.

The diminutive midfielder had been instrumental to Leicester’s remarkable title-winning campaign under Claudio Ranieri in the 2015/16 campaign, before moving on after just a solitary season with the Foxes to make the switch to west London.

Since then, Kante has gone from strength to strength to establish himself as one of world football’s finest midfielders, producing another man of the match performance on a major stage as Chelsea beat Manchester City in the 2021 Champions League final.

A World Cup winner in 2018, the 30-year-old remains pivotal for club and country and his rise from relative unknown to world-beater is one of the most heart-warming tales of the modern footballing era.

Despite still being on the club’s books, Tiemoue Bakayoko hasn’t actually featured for Chelsea since that FA Cup final triumph, having spent the last few seasons out on loan after failing to impress in a disappointing debut campaign in English football.

Part of the hugely talented AS Monaco side that won the Ligue 1 title in the 2016/17 season, the Frenchman was brought to west London by Conte for a fee of around £40m, but failed to impress despite making 43 appearances in all competitions.

Temporary moves to AC Milan, Monaco and Napoli have followed in recent seasons, with the midfielder currently back in Milan for a second loan spell, the Serie A side possessing an option to make the deal permanent in 2023.

Like Moses on the other flank, Marcos Alonso was another beneficiary of the change in system, having joined the club from Fiorentina in 2016, after previous brief stints in English football with Bolton Wanderers and Sunderland.

In Conte’s two seasons in charge, the Spaniard scored 13 league goals after developing into a hugely effective attacking wing-back, with the freedom offered by the role perhaps covering up his shortcomings defensively.

Alonso fell out of favour under both Maurizio Sarri and Frank Lampard with both managers faovuring a back four, but the arrival of current manager Tuchel has reinvigorated his Chelsea career with the 30-year-old battling it out for a starting berth with England international, Ben Chilwell.

A notable bright spark in an otherwise drab showpiece, it was the Belgian who provided the game’s winning moment at Wembley, dancing his way into the penalty area and drawing a clumsy foul from Phil Jones, before stepping up to confidently convert the spot-kick.

Such a moment of quality had become the norm for the former Lille man following his arrival in 2012, with Hazard developing into arguably the best player in the Premier League and the driving force behind the club’s title successes in both 2015 and 2017.

Some players get @EmiratesFACup Final nerves… @hazardeden10 is not one of those players. ❄️ pic.twitter.com/0uAiSzMYNN

After bagging 110 goals for the club in all competitions, the mesmerising forward made a long-awaited switch to Real Madrid in 2019, though has since endured a dismal time at the Bernabeu, leading to speculation over a potential Premier League return.

Olivier Giroud led the line during the Wembley final, with the Frenchman earning the nod over fellow striker Alvaro Morata, who had endured a turbulent first campaign with the club.

Giroud had only signed for Chelsea from London rivals Arsenal during the January transfer window, but started the final before being replaced by the aforementioned Morata, as he secured his fourth FA Cup winners’ medal.

While he enjoyed spells as a starter in the years that followed, the World Cup winner never truly managed to nail down a regular role at the club, although he did net six times during the victorious Champions League campaign last term, before departing for AC Milan.

The Spaniard’s involvement came in the 89th minute against the Red Devils, at the end of what was an underwhelming debut campaign in which he failed to live up to his £60m price tag.

After scoring just 24 goals in 18 months at Stamford Bridge, the striker moved on loan to Atletico Madrid in January 2019, before making the switch to current club Juventus in the summer of 2020.

The 29-year-old previously enjoyed a promising two-year stint in Turin, notably helping the Serie A side to the Champions League final in 2015, while he has also enjoyed two spells at Real Madrid – being crowned a European champion in 2014 and 2017.

The second of two substitutions on the day, Willian entered the fray in the first minute of stoppage time with the win all but secured, the closest United had come to an equaliser an Alexis Sanchez effort that was ruled out for offside.

While not a starter at Wembley, the Brazilian was a key player under a succession of managers during his seven-year stay, having famously spurned the advances of Tottenham Hotspur to join the club from Anzhi Makhachkala in 2013.

After a trophy-laden stint at Chelsea, the former Shakhtar Donetsk winger joined Arsenal on a free transfer in 2020, before joining Corinthians a year later after a dismal solitary season with the Gunners.