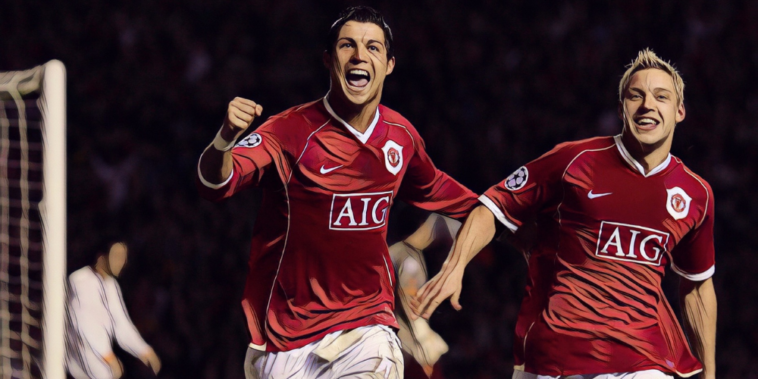 Manchester United face Roma in the semi-finals of the Europa League on Thursday, with fans of the Red Devils hoping for a repeat of one of the club’s most memorable European results.

This season’s semi-final clash will be the fourth time the two teams have faced off in a two-legged European tie, the first seeing Man United dismantle their Italian opponents in emphatic fashion during the 2006/07 season.

Sir Alex Ferguson’s side headed into the return meeting of their Champions League quarter-final clash needing to overturn a 2-1 deficit following first leg defeat in Rome, before producing a scintillating show of attacking football to win 7-1 at Old Trafford.

As the two teams prepare to meet once again in continental competition, we remember the Manchester United starting XI from that seven-goal thumping of Roma.

A former Champions League winner with Ajax, he somehow found himself at Fulham following an indifferent spell with Juventus before becoming Sir Alex Ferguson’s latest attempt to replace Peter Schmeichel.

Fared rather better than those to don the gloves before him, winning four league titles in just six seasons with the first of those triumphs coming just a month after this 7-1 thumping of Roma.

He set a new world record after going 1,311 minutes without conceding a Premier League goal in 2008/09 and played until the age of 40, leaving Old Trafford as one of the club’s greatest goalkeepers.

John O’Shea holds a special place in the hearts of the Manchester United supporters, a man who counts a last-minute winner at Anfield, a Cantona-esque chip at Highbury and nutmegging Luis Figo amongst his list of cult hero moments.

One of the Premier League’s great utility men, O’Shea featured at right-back here before his early second-half substitution for goalscorer Patrice Evra.

Christened the ‘hardest man in all of town’ on the terraces, Wes Brown came through the academy system at the club and enjoyed a wealth of success in the senior side, including five league titles and two Champions League trophies.

Injuries prevented the Red Devils’ fanbase from seeing the best of Brown on a consistent basis, but he was a fine defender when at full fitness and made 362 appearances for the club before moving to Sunderland.

Arguably the best English defender of his generation and one of the Premier League’s finest, Sir Alex Ferguson spent big money to sign Rio Ferdinand in a bid to shore up his defence in 2002.

Ferdinand’s British transfer-record move made him the world’s most expensive defender for a second time in his career, though it proved money well spent following over a decade of superb service at Old Trafford.

Ferdinand exuded calm, composure and quality at centre-back, forming an iconic defensive partnership with Nemanja Vidic and hoisting aloft six Premier League titles and the Champions League amongst his extensive collection of honours.

The tough-tackling Argentine initially proved a popular figure following his arrival into English football, winning the Red Devils’ Player of the Season award after an impressive maiden campaign.

Injury wrecked his second season and upon his return found a Patrice Evra-shaped obstacle in his path to regular first-team football, whilst even his versatility in playing centre-back counted for little given the presence of Ferdinand and Vidic.

Heinze won the Premier League title in his final season but soured relations after pushing for a controversial move to Liverpool, eventually departing for Real Madrid in an £8m deal in 2007.

Handed a starting role after Paul Scholes was suspended for picking up two yellow cards at the Stadio Olimpico, Darren Fletcher did was Darren Fletcher always did – producing an unassuming and selfless showing in the engine room.

Partnered with Michael Carrick in the centre, Fletcher showed his trademark mettle on the big occasion with a performance of signature stamina and commitment.

Never the most fashionable of footballers, the midfielder became a firm favourite on the terraces and won five league titles before finishing his career with spell at West Brom and Stoke.

Michael Carrick got the ball rolling against Roma with a rare goal to open the scoring, lifting a fine finish over Doni from distance after stepping forward from midfield.

He netted a second on the hour with another stunning strike with flew into the top corner, the sixth of the evening for the rampant hosts who blew away the Italians to progress to the semi-finals.

Carrick’s brace was the highlight of his debut season at Manchester United, a club where he would spend 12 years and win every major honour available in club football.

Somewhat overshadowed amongst an incredible generation of English midfielders, Carrick proved the understated midfield metronome of the Manchester United side for more than a decade.

Whatever happened to him?

Cristiano Ronaldo was in the midst of a genuine season of explosion during the 2006/07 campaign, netting 23 for the season – including two against Roma – to be named the Premier League’s finest footballer.

Incredibly this brace was his first ever Champions League goals, and it’s fair to say a few have followed since.

The following year saw the first of five Ballon d’Ors head his way after inspiring the Red Devils to Champions League success, before a world-record move to Real Madrid the summer after.

Over 14 years since a ruthless dismantling of Roma the Portuguese superstar is still scoring a sh*t-ton of goals at the very highest level, an ever-expanding collection of accolades including a further four Ballon d’Or trophies and more records than you can shake a stick at.

Ryan Giggs’ longevous footballing career was closing in on two decades as Roma were swept aside in 2007, with the Welsh winger roaming from a position on the left to wreak havoc throughout.

Giggs played in Alan Smith for the second of the evening before crossing from the right for Wayne Rooney to tap home a third, registering his third assist of a memorable night with another low cross for Cristiano Ronaldo.

Just another day at the office for British football’s most decorated player of all time.

Rooney’s away goal at the Stadio Olimpico had given the Red Devils hope of a comeback and he was key to a stunning showing on home soil, netting the third goal in a seven-minute blitz that took the tie away from the Italians.

This version of Rooney was one who still contained the pent-up attacking aggression of the man-child who first burst onto the scene with Everton, with the forward’s frenzied running central to Roma’s utter annihilation.

Rooney joined the aforementioned Carrick in collecting a clean sweep of club football’s honours during a record breaking career, hanging up his boots as the record goalscorer for both club and country.

The snarling striker with the peroxide blonde barnet broke Leeds’ hearts after leaving his hometown side for their bitter rivals, making a strong start to his career in Manchester before a serious injury.

He failed to truly rediscover his finest form following that lengthy absence, with his goal in the seven-goal thumping of Roma his sole strike for the Red Devils upon his return to fitness.

Smith signed for Newcastle after 93 appearances for the club but was largely a shadow of the player who excelled as a tenacious teenager at Leeds.