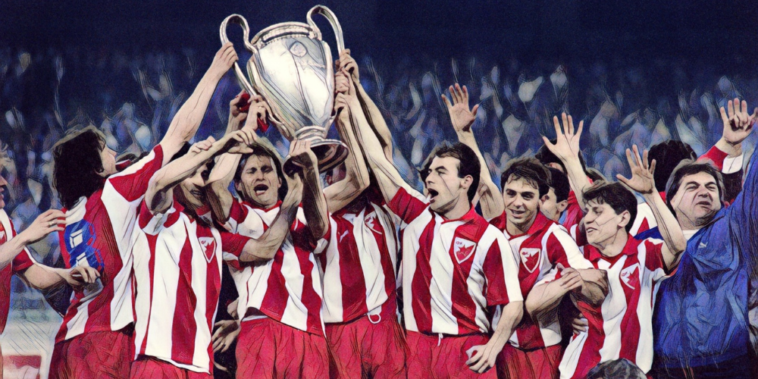 Nostalgia can be a dangerous, duplicitous thing. Through the hazy veil of hindsight we may elevate the greats to the status of gods, but in doing so, we can also lose sight of history’s great underdogs.

Invariably any conversation about the greatest midfield partnerships in history will begin with Barcelona’s brilliant trio of Andrés Iniesta, Xavi Hernández and Sergio Busquets. Those of us who are a little longer in the tooth may also point to the electric Juventus midfield of the nineties – to the remarkable talents of Didier Deschamps, Edgar Davids and Zinedine Zidane. Then there’s my father’s generation, they’d undoubtedly weigh-in with the Dutch masters of the seventies – Willem van Hanegem, Johan Cruyff and Johan Neeskens.

Though our fawning and our proselytising over these legendary midfield trios, we often overlook history’s brief outliers – football’s shooting stars. In their heyday they were perceived as unstylish, unfavored and, ultimately, unworthy of lasting remembrance. Players who’s standing in the game has been eroded by the passage of time.

The tale of Red Star, or Crvena Zvezda, and their triumph in the 1991 European Cup is one of the true European epics, a real hidden treasure. Set against the backdrop of the Yugoslav Wars the Serbian club defied all odds, beating European heavyweights Bayern en route to the final in Bari.

A 0-0 draw with Chris Waddle’s Marseille in the final was decided via penalty shoot-out, with Red Star’s prolific striker Darko Pančev scoring the decisive penalty. The victory was a monumental achievement for the Serbs, one that has been grossly overlooked.

Chris Waddle having his head in his hands after Marseille's defeat in the 1991 European Cup final v Red Star Belgrade pic.twitter.com/EYUAmMynOK

That Red Star team were unfashionable champions. Like so many winners of the European Cup (pre-Champions League) before them, either through lack of reporting, recording or interest, their achievements have been glossed over. It is one of the failings of the contemporary football historian.

Their gallant efforts were also overshadowed in the broader media, ironically, by the very war that inspired them to victory. Such a shame, for Red Star were a bona fide collection of generational talents – particularly their central midfield three.

Every championship winning side needs a solid spine, in this regard Red Star were no different. Manger Ljupko Petrović deployed a fluid 4-1-4-1 system which sought to adapt quickly to the transitions between attack and defence. Out of possession, Red Star reinforced their defence, with the holding midfielder dropping back into the back four. The other central midfielders pressed aggressively, sparking lightning quick counter-attacks. The midfield trio of Vladimir Jugović, Robert Prosinečki and Dejan Savićević fit this system to a T.

Jugović sat at the base of Red Star’s midfield, the engine room of the team. At just 21 years-old the midfielder, who joined Red Star at the tender age of 15, epitomised the Serbian outfit’s high-energy style. He was mobile and combative, a great ball-winner. His passing was reliable, crisp and accurate. Much like Barcelona’s Busquets, it was Jugović’s football intelligence that elevated his game above others.

Young midfielder Vladimir Jugović was MOTM as he scored two goals in the 3-0 win. He would go on to become the most decorated Serbian player ever. #FKCZ https://t.co/KBa61l2WVB

Jugović’s primary role for Red Star was as a holding midfielder, but in practice, he performed a number of duties integral to the success of the 4-1-4-1 system. Jugović, who had a disciplined and diligent approach to defending, was often tasked with man marking the opponent’s play maker. However, it was his symbiotic relationship with Romanian centre back Miodrag Belodedic that was key to the team’s defensive rigidity.

When the opposition had possession in Red Star’s defensive third Jugović would drop back into defence, effectively forming a back five. As Jugović retreated, so too would Belodedic. The Romanian, who was one of the classiest defenders you’re likely to see, would then slot into the libero role, behind the other four defenders. From here Belodedic could dictate to his defenders and sweep up the ball if the opponent managed to breach the defensive line.

Once Red Star had overturned possession, Belodedic often exchanged duties with Jugović, stepping out of defence and initiating counter-attacks with accurate passes through the midfield lines. This was the genius of Petrović’s system – it allowed the mercurial attacking talents of Prosinečki, Savićević, Dragiša Binić and Pančev the freedom to shine. And shine they did, particularly Prosinečki.

After a falling out with the hierarchy at Dinamo Zagreb in the summer of 1987, Prosinečki left the club and was immediately snapped up by Red Star on a free transfer. A player with exceptional technical ability he was easily identifiable by his shock of untamed platinum blonde hair. At just 18 years-old he burst into the Red Star starting eleven, his early performances for the club quickly earning him the tag of Yugoslavia’s hottest prospect.

#OnThisDay in 1990 Robert Prosinečki did this in a victory over Partizan. Legend.

Prosinečki flourished over the following seasons, leading Red Star to league titles in 1990 and ‘91. His attacking prowess was key to his side’s domestic and European double in ‘91, scoring 18 goals from midfield in 44 appearances – an exemplary season by any metric. When Jugović dropped deep, Prosinečki formed a classic midfield four with right-sided midfielder Binić, former Lazio, Inter and Sampdoria utility man Siniša Mihajlović, and his central midfield partner Savićević.

Readers old enough to recall Channel 4’s Gazzetta Football Italia will undoubtedly remember Savićević exploits at AC Milan with much fondness. He was the type of player you paid the admission to see, the sort that is entirely unpredictable. He could ignite the crowd with a flick, a shimmy, a drop of the shoulder. Everything he did was done at speed, but with laser precision, and a grace we have only seen from the Bergkamp’s of history.

"Dejan Savićević really was a genius," said Vladimir Cvetković, general secretary during the player's days at Red Star Belgrade. "When he felt like playing, that is.”https://t.co/SEsnpfGBrmpic.twitter.com/K8nytIrwaw

Savićević and Prosinečki shared the same remit in the Red Star system – to create and score goals. Looking through the old footage of their European Cup run it’s immediately apparent why their counter-attacking philosophy was so effective. The pair had defenders scared witless. Both were adept dribblers, but equally astute at threading balls through to their prolific marksman Pančev. Savićević scored three goals in their seven European matches that season, also chipping in with four assists along the way.

Predictably, Red Star couldn’t replicate their success the following season and the bones of their all-conquering squad were picked dry. It was indicative of a trend developing rapidly across European football. Scouting departments were expanding, the elite were searching further and further afield for a competitive advantage.

History does not remember Red Star’s midfield collective with distinction and, sadly, as individuals their achievements have been similarly overlooked. Prosinečki, who left Red Star in the aftermath of the European Cup final, was the first to jump ship. The lure of a dream move to Real Madrid proved too tempting, but Prosinečki’s time in Spain quickly turned into a nightmare. Plagued by injuries and inconsistent form, he moved to rivals Barcelona in 1995, but saw little game time under manager Johan Cruyff.

19years !!
Prosinecki was a genius

He spoke English when he attacked and spoke none when he was asked to defend 😂😂 https://t.co/TlDvFrFhcM

Prosinečki’s is a tale of horrid luck and underachievement. He could have been heralded as one of the greats, but is now seen as an enigma of the game – a failed genius of sorts. Almost a decade after his stretch in Spain Prosinečki’s nomadic career landed him in Portsmouth. He was caught smoking in the showers at half-time on several occasions, talk about lighting up Fratton Park!

Savićević’s career earned him a loftier standing within the game, yet he is still shamefully underappreciated. The midfielder, who was runner-up for the Ballon d’Or in ‘91, won three Serie A titles and a Champions League (‘94) during his six year stay in Milan.

Jugović enjoyed a similarly glittering career during which he played for Sampdoria, Lazio, Atlético Madrid, Inter and Monaco. However, he will perhaps best be remembered for his two-year stint at Juve, where he won his second European title (‘96).

As individuals the trio excelled at international level, but as a collective at Red Star, they haven’t received an iota of the recognition they deserve. We should question why a midfield – compromising of a man deemed good enough to play for both of Spain’s giants, alongside a pair of two-time Champions League winners – isn’t deemed worthy of an exalted pedestal.