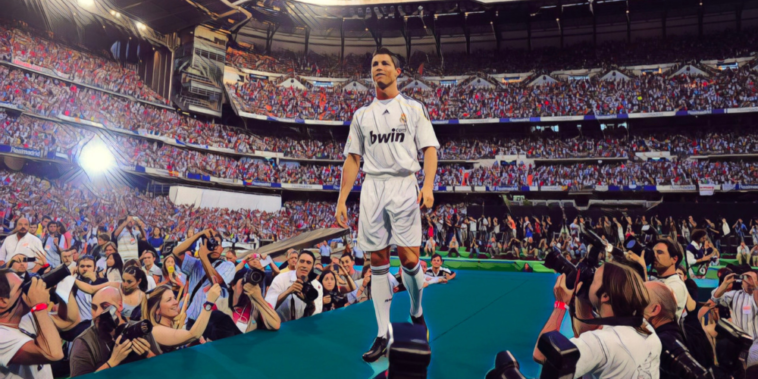 Football fans often wait anxiously for an end to constant transfer rumours, with the official unveiling of their club’s new star signing a highlight of any summer.

Roma fans this week welcomed Paulo Dybala to the club in memorable fashion, with thousands of fans gathering on the streets of the Italian capital to celebrate the signing of the Juventus forward.

Dybala has signed for Roma on a free transfer after leaving Juventus and the capital club’s supporters wasted no time in showing the forward their delight that he has joined I Giallorossi.

Just look at those scenes.

Real Madrid broke the world transfer record to sign Cristiano Ronaldo from Manchester United, splashing out £80m to bring the forward to the Bernabeu in 2009.

The deal came after a long pursuit of the Portugal international, with the Red Devils having lodged a complaint with Fifa in June 2008 over what they believed was a deliberate attempt by the Spaniards to unsettle the player.

Real’s patience and persistence paid off as the club completed a deal the following summer and a record-breaking crowd turned up to welcome Ronaldo to the Spanish capital.

A staggering 80,000 people packed inside the Bernabeu to salute the Ballon d’Or holder, in what was the start of a stunning success story with the club.

13 years ago today, Cristiano Ronaldo was unveiled as a Real Madrid player in front of 80,000 fans at the Bernabeu.

Even he couldn't believe how many people turned up 😅 pic.twitter.com/qoPLtuMnV1

Roberto Soldado arrived into the Premier League recognised as one of La Liga’s best forwards, having scored 81 goals in 141 appearances across three seasons at Valencia.

He failed to replicate that form after a switch to Spurs however, enduring a largely miserable two-season spell in north London before returning to Spain on loan.

His unveiling at Villarreal proved one to forget however, as Soldado found that old habits die hard.

Tasked with the simplicity of kicking the ball into the cheering crowd, he missed.

Much being made of Paulinho's unveiling. Think Soldado kicking the ball into the crowd and missing takes some beating. pic.twitter.com/Xl5bCKwpOd

Diego Maradona is viewed with a god-like status in Naples, with the peak of his career coming with the Italian side.

Napoli had narrowly avoided relegation from Serie A the previous season, before ambitious president Corrado Ferlaino spent a then-world record fee of £6.9million to bring in Maradona from Barcelona.

Hailed as the saviour, a huge 75,000 fans welcomed Maradona to the club at his presentation at the Stadio San Paolo.

His signing had a transformative impact on both Napoli and Italian football, with no club from the south of Italy having ever won a Scudetto before his arrival.

Napoli won their first ever Serie A title as part of a domestic double in 1986/87, before adding a second in 1990 as Gli Azzurri enjoyed the greatest era in their history.

Spanish sides often have a tradition of parading new signings in front of crowds, with part of the routine a short demonstration of their new arrival’s talents.

Keepy uppies is about as basic a task as you can get for a professional footballer, but one that Theo Hernandez badly struggled with as he was unveiled at Real Madrid.

The now AC Milan left-back has come a long way since this sh*t-show at the Bernabeu.

Throwback to the funniest unveiling in Real Madrid history when Theo Hernández showed the world how bad he is at keepy uppies 😅 pic.twitter.com/fGfFIitobo

Newcastle’s talent scouts had allowed Alan Shearer to slip through the net as a youngster, with the forward heading south to forge a professional career at Southampton and later Blackburn.

A record of 112 league goals in 138 games for Blackburn – alongside a Premier League winners’ medal – persuaded the Magpies to spend big to bring the Geordie goal-getter back to his North East.

Shearer was paraded on stage in front of 20,000 jubilant Geordies in 1996, following a £15m then-world record move to St James’ Park.

As the Newcastle Brown flowed the hometown hero was serenaded with chants of “Shearer, Shearer” and an adapted version of Baddiel and Skinner’s Three Lions – as “Shearer’s Coming Home” echoed out.

Silverware might have eluded Shearer upon his return home, but a decade of stellar service and record-breaking 206 goals ensured his legend in Newcastle.

A once common trend in the Premier League during the nineties, but one which has since taken on Dodo-like extinction in the top tier of English football.

Bryan Robson was one of many notable names to take on the duel-role during the Premier League’s first decade and was somehow persuaded into this look for his unveiling at Middlesbrough.

Throw🔙 to when legendary midfielder Bryan Robson was announced as Middlesborough player-manager, and the club convinced him to wear half-suit and half-kit during his unveiling! 🤣 pic.twitter.com/JgI8a2pcUe

Santi Cazorla’s box of tricks has often seen the Spanish schemer called a midfield magician, with Villarreal opting to bring a semblance of sorcery to his unveiling in 2018.

Returning to the club for a second spell, his return to the pitch itself was a miracle given a 636-day absence due to debilitating injury problems at Arsenal.

Just 1000 fans were in attendance for this magic act, but the gathered crowd were treated to a unique unveiling as Cazorla appeared from nowhere to announce his return to the Yellow Submarine.

Unveilings have come a long way since this effort from Sheffield Wednesday in 1997.

The Owls chose to commemorate the signing of Paulo Di Canio from Celtic with this image, as the forward and compatriot Benito Carbone chowed down on an uncooked oven pizza.

Both bizarre and slightly stereotypical, we must admit.

Paolo Di Canio arrives at Sheffield Wednesday – and poses with Benny Carbone and an uncooked pizza from Asda.

PR in the 90s. The glory years. pic.twitter.com/sjL1dSsuSF