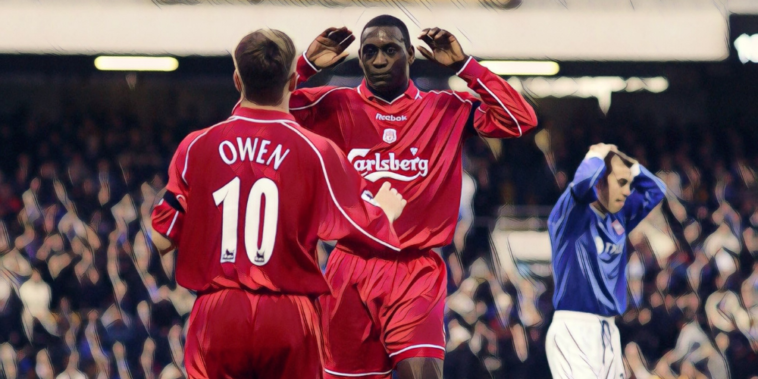 Liverpool joined an exclusive club as they ran riot to record a 9-0 victory over Bournemouth in the Premier League this afternoon.

One of the few clubs to have participated in every Premier League season so far, the Merseyside club have given out their fair share of thrashings with some huge scorelines recorded over the years.

We’ve decided to look back at some of the Reds most convincing victories, here are Liverpool’s biggest wins of the Premier League era.

The rivalry between Liverpool and Manchester City has intensified in recent years with the two sides regular rivals for major silverware, though the latter were a much different outfit in the mid-nineties and found themselves on the receiving end of a hammering at Anfield in 1995.

City had failed to win in their opening 10 league fixtures are were heading towards relegation when they made the short trip to Merseyside, a fixture which ended in a 6-0 victory for the hosts who scored twice inside the opening five minutes through Ian Rush and Jamie Redknapp.

Neil Ruddock powered home a header to make it four before Fowler and Rush doubled their personal tallies for the afternoon, a resounding victory for the Reds against a City side who were relegated at the end of the campaign.

Liverpool had established themselves as contenders for major silverware during the early 2000s under Gerard Houllier, winning a UEFA Cup, FA Cup and League Cup treble during the 2000/01 campaign before finishing as runners-up in the Premier League the following season.

Houllier’s side saw their title push gain momentum following a visit to Ipswich in February 2002, hitting the in-form home side for six with Emile Heskey and Michael Owen each scoring twice.

Ipswich headed into the contest having won seven of their previous eight Premier League fixtures but proved no match for the rampant Reds, who edged closer towards the summit after securing a comprehensive victory at Portman Road.

A memorable win at Ipswich from #onthisday in 2002 🙌 pic.twitter.com/BhBk2xdBp2

Abel Xavier – on his debut after signing from Everton – and Sami Hyypia were also on the scoresheet for the visitors, the victory halting Ipswich’s mini-revival as second season syndrome kicked in for George Burley’s outfit.

Ipswich later travelled to Anfield on the final day of the season and were relegated following a 5-0 defeat, dropping into the second tier just a year after securing UEFA Cup qualification.

Michael Owen enjoyed an afternoon to savour as Liverpool routed already-relegated West Brom in April 2003, scoring four times and bringing up a personal century of Premier League goals at The Hawthorns.

Liverpool led by just a single goal at the break courtesy of Owen’s rifled finish, before two in two minutes at the start of the second half put the Reds in control, Milan Baros scrambling home a second before Owen reacted quickest to score his 100th top-flight goal.

Owen and Baros tormented the hosts throughout as a promising partnership flourished, the latter teeing up the England international for his hat-trick after dribbling through the West Brom defence.

Danny Murphy played in Owen to make it four for him and five for Liverpool, Baros completing the scoring and putting the gloss on an emphatic result after racing on to Steven Gerrard’s long pass.

#StayHome, sit back and enjoy a trip down memory lane ⏪🔴

Our 6-0 win at West Brom from #onthisday in 2003 🗓️⚽️ pic.twitter.com/VZlbdcqOWF

Liverpool moved level on points with fourth-placed Chelsea following the victory, though missed out on Champions League football following a dramatic final day defeat to the west London side at Stamford Bridge.

Liverpool moved top of the Premier League for the first time under Rafael Benitez with this thumping early season victory in 2007, outclassing a Derby side who swiftly found themselves well out of their depth in the Premier League.

Xabi Alonso’s 45-yard free-kick evaded everyone to open the scoring, before Ryan Babel doubled the home side’s advantage with a clever turn and smart finish for his first Liverpool goal.

Fernando Torres continued his fine start as a Liverpool player with a composed finish and Alonso netted a second with a fierce drive to make it four, the dominant hosts adding a fifth as Andriy Voronin tapped home.

Torres netted his second and a sixth for the Reds who taught the newly-promoted side a lesson on Merseyside, an ignominious defeat in the midst of the Premier League’s worst-ever season, Derby relegated after managing just a paltry 11 points.

Newcastle and Liverpool have played out some of the Premier League’s all-time classic contests, but this was far from the ding-dong battles of the mid-nineties as the Reds won in fine style at St James’ Park.

Daniel Agger opened the scoring after just three minutes with a looping header, before former Sunderland midfielder Jordan Henderson netted a cool finish to set Liverpool on their way to their biggest win of the season.

Liverpool were without the suspended Luis Suarez following his 10-game ban for biting Chelsea’s Branislav Ivanovic, though they barely missed the influential Uruguayan as Daniel Sturridge’s quick-fire brace put the visitors firmly in control.

Fabio Borini poked home his first league goal of the season before Mathieu Debuchy was sent off for clattering Philippe Coutinho, with Henderson stepping up to curl home the subsequent free-kick and heap more misery on the relegation-threatened Magpies.

Liverpool’s indifferent league form had seen Brendan Rodgers dismissed and replaced by Jurgen Klopp during the 2015/16 season, with the German enjoying a memorable away victory during his opening months at the helm.

Klopp’s side travelled to the Midlands and inflicted more misery on an Aston Villa side bottom of the division and hurtling towards relegation, scoring six times without reply at Villa Park.

Daniel Sturridge – making his first start under Klopp – opened the scoring, before James Milner scored against his former club to hand Liverpool a two-goal advantage at the break.

Emre Can added a third and Divock Origi scored just 37 second after coming on as a substitute to make it four, the rout completed by a pair of unlikely scorers in Nathaniel Clyne and Kolo Toure.

A sublime performance 💫#OnThisDay in 2016, we beat @AVFCOfficial 6-0 at Villa Park ⚽️ pic.twitter.com/KGkdocsbZC

It was the eighth time that an away side had won 6-0 in the Premier League era with Liverpool incredibly responsible for half of those victories.

After beginning the 1998/99 season with the weird joint-management of Roy Evans and Gerard Houllier, Liverpool moved forward with the latter in sole charge towards the end of the campaign and hopes were raised over a bright future following a record win over Southampton.

The visiting Saints were lacklustre and woeful as the rampant Reds hit seven on Merseyside, Robbie Fowler scoring a hat-trick and moving past a century of league goals for Liverpool.

Dominic Matteo headed home a second after Fowler’s opener, before the latter turned and finished sharply to make it three goals for Houllier’s side before the break.

There was no relenting in the second half as Fowler headed home Michael Owen’s cross for his hat-trick and Jamie Carragher scored the rarest of goals after reacting first to a rebound.

A magnificent SEVEN for the Reds 👌

Extended highlights from our memorable 7-1 win over @SouthamptonFC 🙌 pic.twitter.com/z9CPOArAuu

Egil Ostenstad pulled a goal back for Southampton that ultimately mattered very little to the contest, Owen and David Thompson making it seven goals for the Reds – all of which were scored by graduates of the Liverpool academy.

Liverpool’s 7-0 of Crystal Palace in December was the club’s biggest ever Premier League win, with only nine games in the division’s history having ever been won by a bigger margin.

It was the first time that the Reds had won by a seven-goal margin in an away top-flight fixture, the champions in sensational form as Roberto Firmino and Mohamed Salah each scored twice at Selhurst Park.

Takumi Minamino opened the scoring after just three minutes with his first Premier League goal, before Sadio Mane and Firmino put Jurgen Klopp’s side in cruise control heading into the break.

📈 Liverpool’s 7-0 at Crystal Palace is the biggest away win in their top division history. This was their 2,090th away match in the top flight pic.twitter.com/CyNRSOVBAV

Firmino clipped home a delightful fourth and Jordan Henderson made it five with his first of the season, substitute Salah scoring twice in the final nine minutes to secure Liverpool’s biggest ever Premier League victory.

The victory looked like a statement from the defending champions as they sought to defend the title, but inconsistent performances following the turn of the new year saw Liverpool fall adrift.

Having finished a close second to Manchester City in 2021/22, Liverpool started the 2022/23 season in surprisingly disappointing form, failing to register a single win from their opening three Premier League games – including being beaten by a previously winless Manchester United.

They finally got their first win of the season in their fourth game, and did so in emphatic fashion, hitting newly promoted Bournemouth for nine on a warm afternoon in the Anfield sunshine.

There had been questions about Roberto Firmino’s future at the club over the summer, though the Brazilian answered those questions as he registered three assists in the opening 28 minutes, teeing up Luis Diaz, Harvey Elliott and a Trent Alexander-Arnold screamer as Liverpool came out of the traps flying.

Firmino then netted a goal of his own to make it four, before Virgil van Dijk made it five before the interval.

A Chris Mepham own goal gave the Reds a sixth a minute after the restart before Firmino netted his second of the game to make it seven with 28 minutes still to play.

Fabio Carvalho and Luis Diaz rounded off the scoring in the final ten minutes to confirm Liverpool’s biggest ever Premier League victory, matching the 9-0 wins registered by Man Utd’s wins over Ipswich and Southampton, as well as Leicester’s drubbing of the Saints.