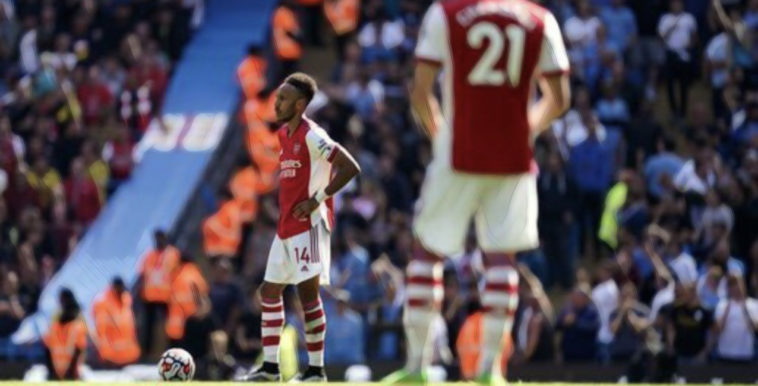 Arsenal’s poor start to the season continued, as they slipped to a third successive league defeat with a 5-0 loss away against Manchester City on Saturday.

Mikel Arteta made four changes for the trip to face his former club, with recent addition Martin Odegaard handed his first league start back with the Gunners, while Pierre-Emerick Aubameyang returned to the starting XI after his hat-trick against West Brom in midweek.

The north London club had looked impressive in seeing off a much changed Baggies side on Wednesday, yet were quickly brought back down to earth against the champions after conceding inside just seven minutes.

Last season’s top scorer and stand-in skipper Ilkay Gundogan arrived unchallenged at the back post to nod home, following an excellent ball in from Gabriel Jesus, the Brazilian looking at home in his new right-wing berth.

Just moments later, the visitors’ defence was once again breached, as they simply failed to deal with an innocuous ball into the box, allowing Torres ample space to slot home past a helpless Bernd Leno.

Arteta’s men had shown flashes of quality in an attacking sense and were almost gifted a way back into the game by Ederson, before their task was ultimately made even harder as Granit Xhaka received his marching orders after a rash and reckless two-footed lunge on Joao Cancelo.

With a man advantage, City then made their opponents pay just before half-time, summer signing Jack Grealish bursting in down the left and teeing up Jesus brilliantly for a simple tap-in.

Into the second-half and it was simply a case of just how many the hosts would get, midfielder Rodri curling in a stunning effort just after the interval to make it four, with the game’s fifth and final goal seeing Torres net a second to rub further salt into Arsenal wounds.

That defeat ensures the Gunners have lost their opening three league games for the first time since 1954, with Arteta left ruing the concession of an early opener as well as a few key refereeing decisions that he believed went against them.

“The first goal was the most disappointing, we were in control of the game, we took the game exactly where we wanted to,” Arteta told BBC Sport.

“The first action they have, we fail to stop the cross and Gundogan has a free header in the middle of goal. If you want to win in this stadium, these are the basics you have to do right.

In the 2nd half of today’s game, Arsenal had 32 touches in the Manchester City half.

Riyad Mahrez came on in the 61st minute and had 38 touches in the Arsenal half. pic.twitter.com/oFZmz4DsSB

“The second goal we concede is a clear foul because he punches Calum [Chambers] in the face. Once we conceded after the red card you know what is going to happen.

“It’s a really quick action from [Granit] Xhaka, he tries to get his feet off the ground and the ref decided it was a red card.”

With the club having spent in the region of £130m in the window so far, the pressure is on the former City assistant to deliver, with the Spaniard insisting that his side will improve once they can welcome back their absent key men, such as Thomas Partey and defender Gabriel.

“For me it is pride and more willingness to change the situation. A lot happened in the last three weeks we are in a difficult position.

“The international break will do us some good to recover some of the big players we are missing at the moment and hopefully we come back we are in a better place.”

Arsenal are next in action against Norwich City on 11 September, following the international break.