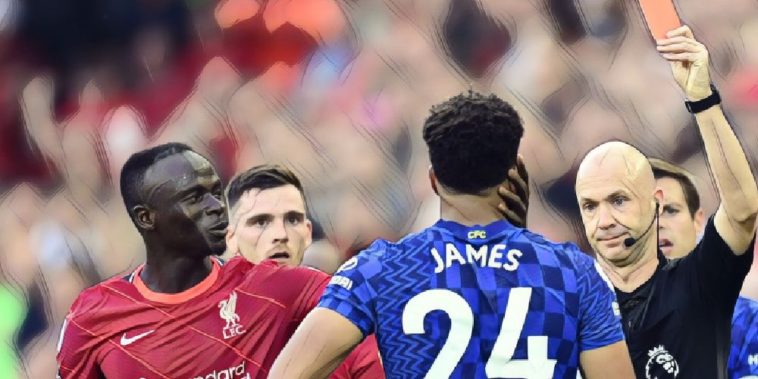 In what was a clash between two of this season’s title favourites, 10 man Chelsea put in a resilient defensive display as they claimed a point against Liverpool.

The early pace of the game was somewhat frantic, with both sides looking to steal possession in midfield and spring quick attacks, Liverpool twice going close in the opening stages through Harvey Elliott and Jordan Henderson.

Much of the pre-match billing had focussed on the battle between Romelu Lukaku and Virgil van Dijk, though it would be Chelsea’s Champions League hero Kai Havertz who would score the opening goal of the game. The German took advantage of Liverpool’s zonal marking with a darting run to the near post to meet a Reece James corner before sending a sensational looping header over Alisson and into the back of the net midway through the first half.

Following the goal, the game had started to settle, though on the stroke of halftime it was given a huge injection of drama. A goalmouth scramble saw Joel Matip’s header come off the bar before Sadio Mane’s follow-up effort was blocked on the line by Reece James. The block saw huge cries of handball from the Liverpool players and Anfield faithful, and having reviewed the footage – which showed the ball had come off the defender’s leg before hitting his arm – referee Anthony Taylor pointed to the spot and sent the Englishman off for the denial of a goalscoring opportunity.

After a minute or two of Chelsea protestations and attempts to get into the head of Mo Salah, the Egyptian confidently stepped up to send Edouard Mendy the wrong way as he dispatched the spot-kick and swung the momentum of the game massively in his side’s favour.

The red card saw Thomas Tuchel sacrifice goalscorer Havertz at the break, and it would leave Lukaku much more isolated as the spearhead of the Chelsea attack, Liverpool enjoying large swathes of possession with the visitors struggling to get out of their own half at times.

Liverpool had a whole number of attempts from range around the hour mark, with Henderson’s curling effort going narrowly wide, while Fabinho and Robertson both forced saves out of Edouard Mendy.

For all of their possession though, they struggled to truly lay the expected siege on the Blues’ goal as Tuchel’s resilient 10 men held on for a point.

Speaking after the game, the Chelsea boss was delighted with his side’s resilience.

“Fantastic [resilience and effort],” he told Sky Sports. “I saw a very strong first half, strong Liverpool side. We were very good. Scored the first goal, had a big chance for the second with Mason Mount, and created a lot of good ball wins and lacked a bit of precision, but had the better chances with counter attacks and transition.

“But the pressure was high, the quality from Liverpool was high, so at some point, we need to suffer and that is what we did, and in the last second conceded a penalty…red card…had to exchange N’Golo Kante at half time for an injury…and suddenly the world is upside down.

Cesar Azpilicueta for Chelsea against Liverpool:

Putting in a captains performance for the Blues. pic.twitter.com/GqKgEaIpfW

“I cannot praise the team enough for the resilience. I don’t know if there are harder stadiums in the world than City and Anfield to go on man down. The first 10 minutes [of the second half] felt it would never end. The next half an hour was like ‘Oh well, maybe we create a chance and score one’, and the last five was ‘Hopefully we survive and take a well-deserved point -, and our resilience and teamwork was fantastic.

“Yes [we took the heat out of the game], with pure will, resilience and team effort at it’s very best. We never lost shape. We decided to go for a back five because of all the runs in the half-spaces and the fluid positions of the full backs from Liverpool, so it was clear we would suffer. But you can make life very, very hard.”

On the red card incident, Tuchel accepted the decision but wasn’t happy with the speed it was made, saying it ‘spoiled’ the game as a spectacle.

“Honestly, I don’t like these red cards in football because nobody in the stadium or on TV want to watch a game 11 against 10. It spoils the game. I have no solution for it because it is a red card and he denies a chance, but it is also a deflection, but who knows. But in general, these early red cards and the game is spoiled.

“We were just worried that he (the referee) was just looking at a photo, and the photo shows gives a clear image that it’s red card. For me, it was too quick. I would have wished for a longer check to see the whole situation where it gets deflected. I can remember that referees explained to us that if it’s a deflection, and it’s not a very unnatural arm position, then it’s not punished. Maybe he would have taken another decision but for me it was too quick.”

Asked about what he learned about his side, the German wanted to see his side perform better against the press.

“I am absolutely happy. We have stuff to improve. Like I said, I was not happy with the precision under pressure and the choices we did under pressure. It was a lot of pressure today from the sideline, but we want to stay competitive. We showed a great team spirit and I think we deserved the result.”

Next up for Chelsea after the international break is a home clash against Aston Villa.