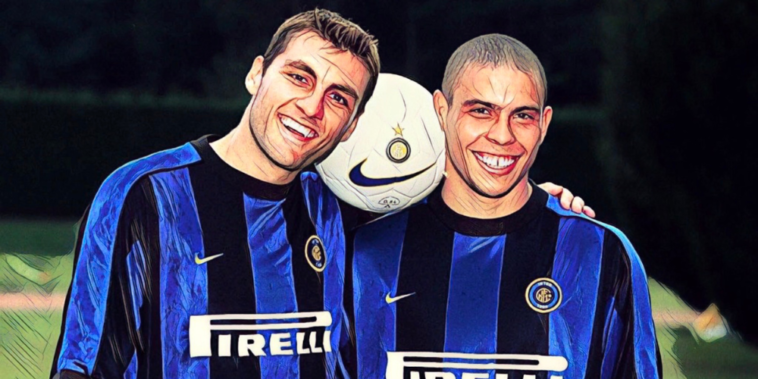 The nineties belonged to Serie A, a decade in which world football’s finest headed to Italian football in the most star-studded collection of talent the game has seen.

Italy’s biggest clubs spent big on extravagant new arrivals during the 1990s and as the decade reached a close Inter Milan boasted a forward line the envy of Europe.

Inter Milan’s season suffered a huge blow as Ronaldo, then holding a status as the game’s greatest talent, suffered the start of the knee issues that would transform O Fenômeno from an unstoppable force to a diluted – but still brilliant – version of himself.

Ronaldo signed for Inter Milan in 1997, having scored 47 goals in 49 games during a breathtaking season at Barcelona. It took a world-record fee to sign the Brazilian, who broke the transfer record for a second successive summer and for the second time before his 21st birthday.

Ronaldo’s first 18 months with the Nerazzurri were sensational, as he tormented the world’s best defenders with scintillating footwork and explosive acceleration. He won the Ballon d’Or in 1997 and was named as Serie A’s Footballer of the Year following a wonderful debut season.

He made just seven league appearances during the 1999/2000 campaign however, and was never the same following a two-and-a-half year battle with knee problems. He was, however, still good enough to win a second Ballon d’Or, after finishing as top scorer in Brazil’s 2002 World Cup success.

Ronaldo was the finest footballer in the game at that time, and was joined in Inter’s ranks by a talent who once held that same title.

Il Divin Codino had been named as FIFA World Player of the Year and as winner of the Ballon d’Or in 1993, during a spell-binding period in the colours of Juventus. After a short spell at AC Milan, he completed a hat-trick of Italian football’s powerhouses after signing for childhood club Inter, via a renaissance at Bologna.

Baggio was reaching the end during his time at Inter, but still capable of exquisite moments. None more so than his match-winning double against Parma in a play-off match for the last remaining Champions League place. Baggio had been out of favour all season under Marcello Lippi, but delivered in a clash of huge importance in what proved his final fixture for the club.

Christian Vieri arrived for a world-record fee ahead of the 1999/2000 season, following prolific spells at Atletico Madrid and Lazio.

The forward had bounced around clubs in his early career, but found a home at the San Siro. He scored 18 goals during his debut campaign and finished as Inter’s leading goalscorer in five consecutive campaigns.

His finest campaign came in 2002/03, as he scored 24 goals in just 23 games to win the Capocannoniere award as Serie A’s leading scorer. A brutish centre-forward who bullied defenders, he holds the Serie A record for most ever headed goals.

Vieri scored 123 goals in just 190 appearances for the Nerazzurri and the premature ending to his promising partnership with Ronaldo, due to the latter’s injury issues, must still rankle among the club’s support.

Ivan Zamorano’s infamous 1 + 8 shirt is often remembered from his time at Inter Milan, with the Chilean creative when forced to give up his favoured number nine to Ronaldo.

Zamorano was a fantastic footballer in his own right however, and while not as prolific in Italy as he had been in Spain, mustered a strong record of 41 goals in 138 games for Inter.

‘Bam Bam’ had scored over a century of goals at Real Madrid, but injuries hindered his ability to replicate those heights in Serie A. However, he became a hugely popular figure at Inter Milan, with the club’s supporters appreciating his fighting spirit and passion for scoring goals.

An excellent header of the ball with a brilliant leap, he scored the early opener in the final as Inter beat Lazio to win the 1998 UEFA Cup.

Alvaro Recoba memorably stole the spotlight from Ronaldo during a stunning debut for Inter Milan.

The pre-match talk surrounded the debut of the Brazilian superstar following his world-record arrival, but Recoba stole the show with two spectacular goals from distance.

Inter were trailing when Recoba turned the game around, with his first a stunning strike from distance that arrowed into the top corner. He then bent home an unstoppable free-kick for the winner, upstaging his illustrious teammate and announcing his own arrival.

The Uruguayan spent a decade with Inter Milan and scored 72 goals in 272 appearances. His left foot, cultured and capable of almost anything, was among the most special the San Siro has seen.

Adrian Mutu was a hot prospect attempting to climb up a seriously stacked pool of striking talent, with the Romanian handed ten appearances during his debut campaign in 1999/2000.

Mutu marked his debut with a goal against AC Milan, but struggled to dislodge the established names ahead of him in the pecking order.

He moved on to Verona at the end of the campaign, before his real big break came at Parma. Starring alongside future Inter Milan star Adriano, he scored 22 goals in all competitions during the 2002/03 campaign.

That form persuaded newly-rich Chelsea to spend big on Mutu, but his time in west London lasted little more than a season as a ban for cocaine use saw his contract terminated.