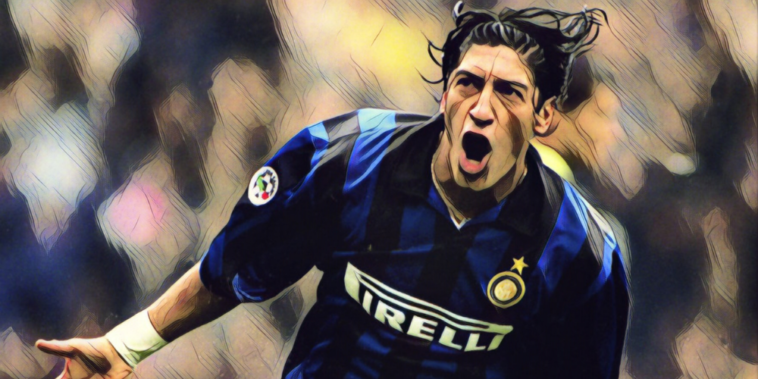 Rarely has a footballer leapt quite like Ivan ‘Bam Bam’ Zamorano.

The Chilean was a wonderful exponent of the header, a forward who flung himself towards aerial balls and leapt from the turf almost as if there were trampolines in the soles of his boots.

For football fans of a certain age, Zamorano’s quirky response to a shirt number switch-around at Inter Milan can be the abiding memory of a forward whose legacy is much, much more than that.

Zamorano loved scoring goals and the fans loved him for it.

Whether it was in Spain, Italy or his native Chile, there was a dedication and drive about Zamorano that resonated with the supporters of his respective clubs, a footballer prepared to run through walls for the colours he adorned.

Zamorano’s career began at Cobresal, where bristling with confidence after a prolific loan spell in Chile’s Segunda Division he returned to fire the side to their first national title, the 1987 Copa Chile.

The forward averaged almost a goal-per-game in league and cup competition to attract European interest, but his pathway towards the top of the sport was an unorthodox route.

Bologna struck a deal to bring Zamorano and compatriot Hugo Rubio to the club, but opting for the experience of the latter and sent the fledgling forward on loan to St Gallen in Switzerland, where his prolific exploits soon ensured a permanent move.

The Serie A side must no doubt have regretted that choice as after 38 goals across two seasons in St Gallen, Zamorano was on the move once more after signing for Sevilla – a transfer that proved the making of the Chilean as one of Europe’s elite goalscorers.

Forming a formidable partnership alongside Davor Suker for the Andalusians, he scored 23 goals in 63 appearances for Sevilla and began to establish himself with the Chile national side.

Two seasons of success in Seville saw the Chilean courted again, and in 1992 Real Madrid came calling for his services.

In need of inspiration as Johan Cruyff’s Barcelona ‘Dream Team’ began to dominate the Spanish footballing landscape, Zamorano was viewed as the ideal focal point to spearhead Los Blancos’ charge.

Tireless and tigerish in his work-rate and clinical around goal, he scored 37 goals during his debut season in an emphatic demonstration of his talents, becoming a cult figure amongst the Madridistas in the process.

His second season proved less successful, but the controversial capture of Michael Laudrup from Barcelona provided Real with the potent partnership needed to reestablish Spanish supremacy.

Laudrup’s defection from the Camp Nou in 1994 saw the Danish schemer cross the divide of Spanish football’s superpowers and sign for the capital club, his exquisite invention proving the perfect foil for the formidable firepower of Zamorano.

The Chilean finished as the league’s leading scorer with 28 goals as Real were crowned champions, the highlight of which was an iconic individual performance in an El Clasico embarrassment of the defending champions.

Zamorano hit a first-half hat-trick and was involved in each goal as Real thrashed Barcelona 5-0 at the Bernabeu, his first a lashed left-footed effort that flew in the near post, before sealing a tantalising treble from close range before the break.

Had he never worn a Real Madrid shirt again, his legacy was safely assured.

His partnership with Laudrup was matched with an equally explosive threat on the international stage, as Zamorano and Marcelo Salas carried the weight of expectation for Chile.

Both were clinical and renowned for their aerial prowess, instinctive finishers off either foot and a perfect marriage of goalscoring menace.

What a duo Marcelo Salas and Ivan Zamorano were! pic.twitter.com/Io1NUmLBJF

The duo combined for 23 goals – Zamorano with 12 and Salas with 11 – during qualification for the 1998 World Cup, finishing as the two leading scorers in South American qualification as a Chile side reliant on their devastating duo secured their place in France.

Despite scoring over a century of goals across four seasons at Real Madrid, Zamorano’s time with the club lasted just one further season as the emergence of Raul diminished his role in the side.

The summer of 1996 saw the star sign for Inter Milan on a free transfer, heading to Serie A at a time where Italy was truly the home of the game’s greats.

One look at the forward talent that Inter assembled during that period is enough evidence of the league’s incredible quality, with the likes of Christian Vieri, Roberto Baggio, Ronaldo, Alvaro Recoba, Kanu, and Hakan Suker all amongst his teammates across a four-season spell at the San Siro.

Injuries hindered his ability to reach the heights of his Real Madrid heyday, but the fighting spirt and extroverted passion he showed whenever taking to the field won the hearts of the Nerazzurri faithful.

Zamorano may have been born almost 12,000km away and on the opposite side of the Atlantic, but in the eyes of the Inter support he was one of them.

He dovetailed alongside Inter’s stellar cast of forwards, providing the battling presence to free Ronaldo during his sublime 1997/98 campaign as Inter won the UEFA Cup – Zamorano opening the scoring in the final against Lazio.

The arrival of Roberto Baggio that summer led to his now infamous change of shirt number, as the Italian icon’s claiming of the number ten shirt saw Ronaldo move to nine, with Zamorano left with the 18 and an iconic plus sign.

Zamorano admits the arrival of Baggio and presence of Ronaldo meant he had no option, gratefully allowing the latter – a player he described as ‘the best player in the world’ – to have his coveted shirt.

“The idea came about because the best in the world had arrived,” he told the Guardian.

“I had to hand the No 9 over to him. The only thing missing from him was what I did best, scoring headers. He didn’t get many goals with his head. Everything else, complete: left foot, right foot, power, ability, magic!

“Ronaldo is among the best. Pelé, Maradona, Beckenbauer, Cruyff, Messi, Cristiano, Ronaldo… he’s on this list of the 10 greatest players ever.

“He had everything. In training it was better than the weekend. He was a phenomenon.”

Zamorano admitted the idea for his innovative way of keeping the ‘nine’ came from the club’s sporting director, though his alteration needed permission from the Italian football federation.

“The sporting director, Sandro Mazzola, told me to pick a number that added up to nine. I said: ‘Can I add a plus sign?’ He told me not to. I said: ‘How come? Request permission.’ I spoke to the president, Massimo Moratti, who asked the Italian federation. So I played with 18, 1+8, and I didn’t lose the No 9.”

He scored 41 goals in 138 appearances for Inter Milan before signing for Mexico’s America, later returning to Chile to fulfil his lifelong ambition of representing Colo-Colo before hanging up the boots that had plundered 349 goals across his club career alone.

Zamorano’s willingness to chase lost causes and a salmon-like leap made him a nightmare for opposition defenders, earning him the moniker ‘Iván el Terrible’.

The nineties was a time of elite goalscorers and Zamorano for a period was amongst the decade’s best, an icon at Real Madrid and a legend at Inter Milan, the Chilean was a footballer who could turn a hopeful cross into a match-winning moment.