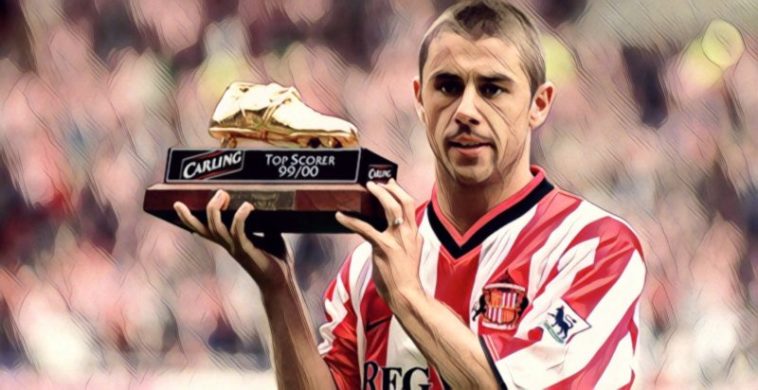 English football has a long tradition of producing great goalscorers and the Premier League has played host to some of the most iconic figures in the country’s history in modern times.

Whilst the likes of Alan Shearer, Michael Owen and Harry Kane have all won multiple domestic Golden Boots, only one Englishman has ever finished as the leading scorer in European football – Sunderland’s Kevin Phillips.

It’s been two decades since Phillips enjoyed the most remarkable of Premier League seasons for Peter Reid’s Black Cats and we’ve decided to revisit 1999/2000, a campaign that remains one of the most memorable Wearside has ever witnessed.

The prelude of Phillips’ remarkable achievement saw a far from straightforward journey, dropping into non-league after being deemed not good enough at Southampton, where he had played largely as a right-back given his diminutive size.

Phillips spent three seasons with Baldock Town where, following an injury crisis, he was handed an opportunity as a striker – one he would grasp with both hands to earn a move to Watford.

Another impressive spell followed, Phillips scoring 25 goals across three seasons for the Hornets but the club’s relegation to the third tier saw him move on once more, signing for a Sunderland side recently relegated from the Premier League.

It would prove to be the beginning of an unforgettable spell in the North East.

Phillips’ first season at Sunderland saw him plunder 35 goals in all competitions, working brilliantly in tandem with the veteran Niall Quinn to fire the Black Cats into promotion contention.

Reid’s side fell agonisingly short in their bid to immediately bounce back to the top tier, however, finishing just one point short of automatic promotion before losing the play-off final on penalties after an unforgettable 4-4 draw – in which Phillips scored – against Charlton at Wembley.

The following season saw Sunderland bounce back to romp to the Division One title, finishing with a then record of 105 points to secure their return to the Premier League, Phillips finishing as the club’s leading scorer with 25 goals in all competitions despite an injury-interrupted campaign.

Such was the forward’s form, Phillips earned a first senior cap for England despite having never played at the highest level, but even with that recognition doubts remained over his ability to step up, with pundit Rodney Marsh famously suggesting the Sunderland star would struggle to score ‘five or six’ goals upon the club’s return to the Premier League.

Phillips himself had doubts, though those initial doubts would soon be removed in spectacular style.

“I was feeling quite apprehensive, quite nervous, because although I’d scored a lot of goals going into the Premier League, it’s a big step up from the Championship.

“You’re pitting your wits against some of the very best, not just in Europe, but in the world. You sort of question yourself: Can I produce?”

Sunderland’s campaign began disastrously as they were thrashed 4-0 on the opening day at Chelsea, before Phillips got the club’s season up and running by scoring both goals in a 2-0 victory over former club Watford at the Stadium of Light.

The ‘little and large’ partnership of Phillips and Quinn continued to prove problematic for Premier League defences, the former’s quick feet and ruthless finishing ability perfectly complimented by the towering presence of the experienced Irishman.

The duo combined on a famous evening for the Sunderland supporters just six games into the campaign, each scoring as the Wearsiders came from behind to secure a first victory over local rivals Newcastle in two decades at a rain-soaked St James’ Park – Phillips scoring a delightful lofted effort to secure three points for the visitors.

He found the net once more with an acrobatic equaliser to salvage a draw against Coventry, before truly announcing himself in the top flight with a brilliant hat-trick to put Derby County to the sword at Pride Park.

That treble proceeded a month that saw Phillips named as the Premier League’s Player of the Month, scoring five times in four fixtures including back-to-back braces in victories over Bradford and Aston Villa.

Reid’s men had registered five successive victories, and by early November the newly-promoted side were sitting in the dizzying heights of third, making a mockery of their pre-season status amongst the favourites for the drop.

Defeat to Liverpool halted the momentum of a 10-game unbeaten run for the Black Cats, but the best was yet to come for both Phillips and Sunderland over the course of the festive fixture schedule.

The forward scored twice in a thrilling victory over Watford at Vicarage Road, before arguably the defining moment of the club’s season as the Phillips-Quinn partnership combined to devastating effect.

Chelsea – 4-0 victors over Sunderland on the opening day of the season – were the visitors to the Stadium of Light, but the west London side had no answer for the home attack as Phillips and Quinn helped themselves to a brace each in a 4-1 thrashing of Gianluca Vialli’s side.

Phillips later named his first of the afternoon as his favourite goal from his Golden Boot winning season, a stunning dipping volley from distance past the helpless Ed de Goey.

A third consecutive brace against Southampton took Phillips to 19 league goals at the turn of the New Year, and whilst Sunderland’s form wobbled from that point – Reid’s side going winless in 11 games between Boxing Day and late March – Phillips continued to provide a reliable source of goals.

That run included both goals in a dramatic 2-2 draw with Newcastle in the first Wear-Tyne derby at the Stadium of Light, Phillips salvaging a draw for the hosts who came back from two goals down, his late equaliser causing pandemonium amongst the home support.

Those goals saw Phillips move further clear of Alan Shearer in the race for the Golden Boot, the Newcastle talisman having finished as the division’s leading scorer in three of the previous five seasons and once again amongst the contenders.

Sunderland’s hopes of success were pinned on the goalscoring exploits of Phillips but the club would ultimately fall short in their quest to secure European qualification, that winless mid-season run seeing the Black Cats eventually finish seventh, finishing behind Aston Villa by virtue of goal difference.

He became just the second player in Premier League history – after the aforementioned Shearer – to reach the 30-goal landmark in a 38-game season, finding the net in the club’s penultimate game of the season against West Ham.

That tally saw Phillips finish seven goals clear of Shearer in the race for the Golden Boot, an incredible turnaround in fortunes for a player who used to clean his rivals’ boots as an apprentice at Southampton before failing to make the grade on the South Coast.

The crowning moment of his season and his career came with his coronation as Europe’s leading scorer, finishing ahead of stellar names such as Mario Jardel, Ruud van Nistelrooy and Andriy Shevchenko courtesy of the Premier League’s leading co-efficient ranking.

His form also saw him included in England’s squad for the 2000 European Championships in the Netherlands and Belgium, but despite his undoubted self-confidence and exploits on Wearside he failed to make an appearance as the Three Lions exited the competition at the group stage.

Phillips would never quite recapture the form that made him the Premier League’s deadliest forward during a glorious 1999/2000 season, reaching 14 league goals the following season and later enjoying less productive top-flight spells at Southampton, Aston Villa and Birmingham City.

He remains one of a select group of elite players to have broken the 30-goal barrier in the Premier League era and the only Englishmen to have won the European Golden Boot, a feat he believes may never be matched.

“I thought it was a hell of an achievement. No disrespect, but generally when players score 30 goals, they are doing it in a team who are in the top two, three, or four in the league.

“I did it in a team that finished seventh, in a team that – and I love Sunderland, they’re dear to my heart – are not fashionable compared to Man Utd, Arsenal, Liverpool and so on.

“So I think that made the achievement even better. To have received the Golden Boot in the whole of Europe as well, it’s never been beaten [since, by an English striker], and I don’t think it ever will when you have the likes of Messi and Ronaldo and Neymar.”

Whether his achievements will ever be matched will be seen in the coming years, but one certainty is that two decades later ‘Super’ Kevin Phillips and his incredible 1999/2000 season remains impossible to forget.