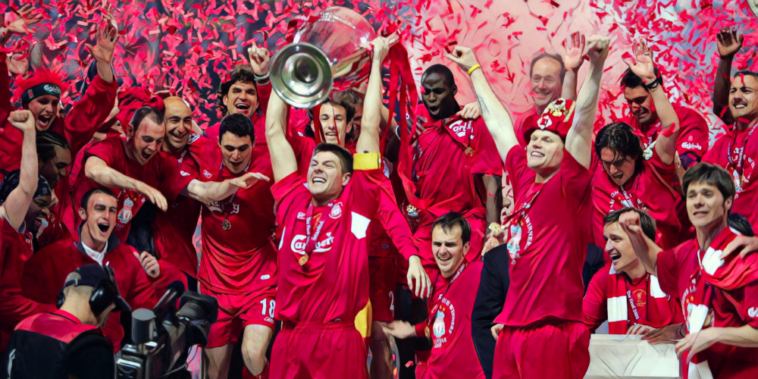 Liverpool will meet Real Madrid in the Champions League final this weekend, as the Reds look to extend their storied history in European competition.

Jurgen Klopp’s team are in pursuit of a seventh coronation as European champions, a figure that will move the Merseysiders behind only the record 13 wins of their illustrious final opponents from the Spanish capital.

Ahead of club football’s biggest fixture, we look back at remember each of Liverpool’s six European Cup/Champions League triumphs.

Liverpool became champions of Europe for the first time in 1977, after beating Borussia Monchengladbach in Rome.

Bob Paisley’s side had won the UEFA Cup the previous season before going on to win Europe’s biggest prize against the Bundesliga side.

Terry McDermott opened the scoring to give the Reds a 1-0 lead at half-time, but Allan Simonsen’s brilliant finish levelled the scores for Monchengladbach soon after the break.

Bob Paisley led us to our first European Cup win in 1977 😍 pic.twitter.com/AKWF2DXQR1

Kevin Keegan – in his final appearance for Liverpool before moving to Hamburg – was then brought down inside the area with Phil Neal stepping up to convert the penalty and crown Liverpool champions.

Liverpool reached a second successive European Cup final the following season, where the Reds met Club Brugge in a rematch of the 1976 UEFA Cup final.

Liverpool had won that clash 4-3 on aggregate and ended victorious once again at Wembley, as Kenny Dalglish ended his debut season with the club in dream fashion.

King @kennethdalglish scored against Club Brugge in 1978 as we retained the European Cup 👑 pic.twitter.com/ZifuW7J6ob

The Merseysiders dominated the clash but struggled to break the deadlock against their organised opposition, before Dalglish was freed inside the area and lifted a delicate finish over the diving Birger Jensen.

The Scotland forward had been signed from Celtic as a replacement for Keegan and ended his first campaign with 31 goals and a European Cup winners’ medal, as Liverpool became the first British team to defend the trophy.

Jurgen Klopp’s team will take on Real Madrid in Paris this weekend, in a repeat of the 1981 final between the teams in the French capital.

The Spanish side were appearing in their ninth final after dominating the early editions of the competition, but were searching for a first European Cup win since 1966.

In a tight game it was Liverpool who won the trophy, as Alan Kennedy burst into the box before lashing in a high finish to emerge as the unlikely hero of the Reds’ triumph.

Taking Ol’ Big Ears back to Liverpool for the third time 😍

Alan Kennedy’s goal won it for us in Paris against Real Madrid in 1981! #UCLfinal pic.twitter.com/myHTFjDmOD

The win saw Bob Paisley become the first coach to win the trophy on three occasions – a record since equalled by only Carlo Ancelotti and Zinedine Zidane – whilst it was a fifth straight success for English clubs in Europe.

Liverpool entered the 1984 European Cup final in pursuit of an unprecedented treble of trophies, having already claimed the First Division title and the League Cup before taking on Roma.

The final was staged in the Italian capital with Roma on home soil in the Stadio Olimpico and the Reds faced an intimidating atmosphere in their pursuit of a fourth European crown.

A defensive mix-up saw Phil Neal capitalise to give Liverpool an early lead, though Roma hit back to level before the break through Roberto Pruzzo’s flicked header.

Another famous night in Rome in 1984, as we made it four European Cups and completed a treble 😍

Unable to be separated after extra-time, the final went to a shootout with Steve Nicol missing Liverpool’s first from the spot. The infamous ‘spaghetti legs’ of Bruce Grobbelaar proved a distraction to the Roman takers however, with both Bruno Conti and Francesco Graziani smashing spot-kicks over the bar.

Alan Kennedy, the hero of the win over Real Madrid three years earlier, stepped up to score the winner as Liverpool – now under the management of Joe Fagan – won a fourth crown.

Liverpool reached the final for the first time in two decades in 2005, as Rafael Benitez’s unfancied side progressed through the competition to meet AC Milan in Istanbul.

Liverpool had finished the Premier League season in fifth and were outsiders against a formidable Milan team. who were seeking a second Champions League success in three seasons.

The pre-match narrative appeared to be ringing true as Liverpool found themselves a goal down inside 52 seconds, as Paulo Maldini scored the fastest ever final goal.

#OnThisDay in 2005, we completed one of the greatest comebacks of all time 😱 pic.twitter.com/BFTTlMPdLI

Milan were rampant and headed into the break 3-0 up, a fine first-half performance orchestrated by the brilliance of Kaka. Hernan Crespo’s double had added to Maldini’s early opener and put the Serie A side in firm control at the Ataturk Stadium.

What followed was a thrilling comeback from Liverpool, who scored three times in just six second-half minutes to level the scores at 3–3, with goals from Steven Gerrard, Vladimir Smicer and Xabi Alonso.

The Reds rode their luck throughout the remainder of the game and extra-time, with Jerzy Dudek making a sensational double save from Andriy Shevchenko to keep the scores level.

Dudek saved again from Shevchenko as Liverpool won 3-2 on penalties, completing the ‘Miracle of Istanbul’ and an unforgettable comeback in the most entertaining final of the Champions League era.

For just the second time two English clubs went head-to-head for the Champions League in 2019, as Liverpool took on Tottenham in an all-Premier League final.

The final itself proved a largely forgettable encounter as the familiarity between the teams showed, whilst the game turned on an early penalty as Moussa Sissoko’s handball allowed Mohamed Salah to score from the spot inside 106 seconds.

Caution followed as Liverpool protected their early lead, before substitute Divock Origi – the hero of the semi-final comeback against Barcelona – struck a late second to seal a sixth European crown for the Reds.

The win was Jurgen Klopp’s first major trophy as Liverpool manager, after the club had suffered defeat to Real Madrid in the previous season’s final.