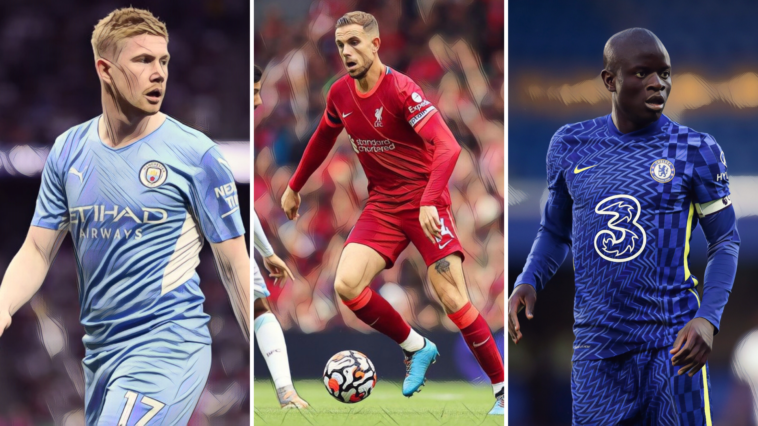 Midfield reinforcements have been on the agenda for the Premier League’s big six’ this summer if the gossip columns are to be believed, with a host of the division’s leading sides targeting additions in central areas.

Manchester United, Liverpool, Chelsea and Tottenham have all been linked with central midfielders, whilst Arsenal have already moved to sign Albert Sambi Lokonga and Martin Odegaard.

Dominating the engine room can often prove the difference in tight contests and we’ve decided to assess the current options at the Premier League’s ‘big six’ clubs.

Arsenal’s midfield options have been reinforced this summer with the signing of Albert Sambi Lokonga, with the youngster having shown promise to earn a call-up to the Belgium squad for next month’s World Cup qualifiers.

Thomas Partey will hope to improve on a frustrating first campaign at the Emirates this season, whilst the emergence of Emile Smith Rowe has been a welcome boost to a transitional team.

Martin Odegaard has returned from Real Madrid on a permanent deal and has potential for further development, whilst Granit Xhaka has signed a new contract despite strong speculation over a summer move to Roma.

Beyond those options there is Mohamed Elneny and Ainsley Maitland-Niles providing depth, though neither appear at the level required to bridge the gap to the top teams or to have long-term futures in north London.

Arsenal’s options in central areas are some way short of their ‘big six’ rivals, an indication of the distance the Gunners have fallen behind.

Chelsea boast one of the most talented and stacked squads in European football at present, with Thomas Tuchel boasting an embarrassment of riches at Stamford Bridge.

Competition for places in midfield is fierce at the west London side, with both N’Golo Kante and Jorginho nominated for the UEFA Men’s Player of the Year Award, the accolade won by the latter following Chelsea’s Champions League success.

Mason Mount can operate in various midfield roles or further forward and won the club’s Player of the Season award last season, whilst Mateo Kovacic is an underrated presence amongst Chelsea’s contingent of central midfielders.

Kai Havertz is also comfortable in midfield despite largely featuring in a forward role since arriving in the Premier League from Bayer Leverkusen, whilst returning loanees Ruben Loftus-Cheek and Ethan Ampadu provide further depth.

Georginio Wijnaldum’s summer departure to PSG on a free transfer has seen Liverpool linked with midfield reinforcements, though Jurgen Klopp insists he is content with his current options.

More will be expected of Thiago Alcantara this season following a challenging first season in the Premier League, though the return of Fabinho and Jordan Henderson to the Liverpool midfield on a regular basis will provide the Spaniard a greater platform to flourish.

That trio are expected to be Klopp’s first-choice three for the campaign, though Naby Keita is pushing hard for a regular place as he looks to overcome his injury issues and fulfil his potential.

Alex Oxlade-Chamberlain will similarly be hoping for a run of consistency following a frustrating spell, whilst James Milner provides experienced and versatile cover across the board.

Curtis Jones has impressed since making the step-up to senior level, where he will be joined by Harvey Elliott this season – the 18-year-old’s pleasing progress since returning from a loan at Blackburn a welcome boost for the Reds.

Liverpool’s midfield remains amongst the most functional and effective in the Premier League, though a notable lack of goals from central areas prevents a higher rating.

Manchester City have dominated the Premier League in recent seasons, aided by one of, if not the best midfield line-up in the division.

Kevin De Bruyne has won the PFA Player of the Season in each of the past two campaigns and is arguably the division’s stand-out star at present, whilst Ilkay Gundogan provides a more the capable supporting cast and enjoyed the best season of his career in 2020/21.

Phil Foden and Bernardo Silva are capable of operating as advanced midfielders, whilst the £100m record arrival of Jack Grealish adds another level of quality to a talent-stacked side.

Paul Pogba and Bruno Fernandes are the top-level members of the Manchester United midfield, though the lack of an elite defensive midfielder prevents the Red Devils from scoring highly.

Fernandes has provided 68 goal involvements in 82 games since signing from Sporting Lisbon and takes up permanent residency at number ten, whilst Pogba is often shunted out wide to accommodate the industrious but maligned midfield axis of Fred and Scott McTominay.

Both players have their qualities, but Ole Gunnar Solskjaer’s refusal to trust either player as a sole defensive screen emphasises their limitations.

Nemanja Matic is a faded force, whilst Donny van de Beek has performed well below expectations since a £34m move from Ajax last summer.

United have strengthened well in the transfer market this summer, but their failure to sign a specialist midfield anchor could prevent the Red Devils from mounting a sustained title challenge.

Tottenham’s midfield options remain largely unconvincing when assessed as a whole, with Nuno Espirito Santo bidding for balance during his opening fixtures in north London.

Pierre-Emile Hojbjerg has been a shrewd signing from Southampton and topped the Premier League for tackles won last season, though it appears an open race for who joins the Denmark international in Nuno’s midfield trio.

Dele Alli has shown signs of a renaissance during the early weeks of the campaign and a return to his finest form would represent something akin to a new signing for Spurs, whilst Oliver Skipp has been afforded an opportunity after returning from a loan spell at Norwich.

Giovani Lo Celso has his admirers for a tireless work rate, but the futures of Harry Winks and Moussa Sissoko both appear uncertain.

Spurs midfield is more functional than frightening at present and is in need of an injection of quality if the club are to challenge for the top four.