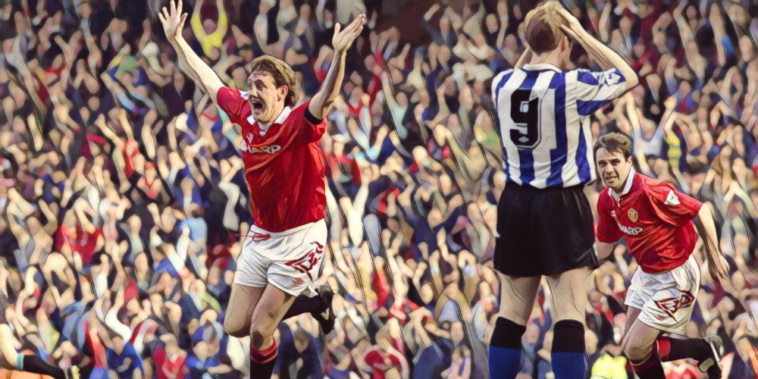 English football has seen some wonderful headed goals scored in its modern history, with the Premier League having been home to some of the best exponents of an effective goalscoring method.

Fans relish watching a player tower above his opponent before powering home a headed goal and the Premier League has witnessed some iconic headers – both in terms of aesthetic and importance.

Here are five of our favourite headed goals in Premier League history.

Sir Alex Ferguson’s side overcame an indifferent start to gain momentum in the title race, with the mid-season signing of Eric Cantona proving the catalyst behind their upturn in form.

There was little to separate the Red Devils from title rivals Aston Villa as Sheffield Wednesday visited Old Trafford in April 1993, though their title charge was at risk of being derailed after John Sheridan’s penalty handed the Owls a second-half lead.

Trailing with just five minutes remaining, Steve Bruce powered home a header to equalise, setting up a grandstand finish as the hosts pushed desperately for a much-needed winner.

It would come in the most dramatic of fashion.

On this day in 1993, Steve Bruce netted twice against Sheffield Wednesday to help #MUFC clinch our first @PremierLeague title! pic.twitter.com/U4xcZRyR4b

Bruce, remaining forward late into stoppage-time, stooped to meet a dropping ball in the penalty area, guiding home his second in the 96th-minute to spark jubilant scenes as Ferguson and assistant Brian Kidd erupted on the sidelines.

United moved two points clear of Villa and onto a first league title in 26 years, the late, late drama against the Owls regarded as the birth of ‘Fergie Time’.

Another headed goal that ultimately proved decisive in the Premier League title race, a new-look Arsenal team took on defending champions Manchester United in a high-stakes clash in November 1997.

The north London side had started Arsene Wenger’s first full season in charge with a 12-game unbeaten run, but headed into the fixture at Highbury winless in three and on the back of a 3-0 humbling at Derby County.

The game was viewed as an acid test for the Gunners, against a United side that had won three of the previous four Premier League titles and travelled to the capital having scored 13 goals across their past two league fixtures.

Arsenal raced out of the traps to take a seventh-minute lead through Nicolas Anelka, before Patrick Vieira doubled the advantage just before the half hour with a powerful effort from 25 yards.

The champions hit back and were level before the break however, Teddy Sheringham scoring twice to restore parity as the whistle was blown on a breathless first half of action.

⏪ As David is celebrating today, we're throwin' it back to this late winner against Manchester United from 1997 😎 pic.twitter.com/CVExSJWGTg

The pace of the game slowed after the break, but there was time for one late twist in the tale.

David Platt rose highest to meet Nigel Winterburn’s 83rd-minute corner and guide a looping header into the far corner, his late winner proving crucial as Arsenal eventually edged their beaten opponents by just a single point in the title race.

Bradford pulled off the great escape on the final day of the 1999/2000 season, with David Wetherall’s dramatic winner against Liverpool ensuring the Bantams’ top-flight status.

There was little expected of Paul Jewell’s side who had returned to the top tier after a 77-year absence, with a run of six successive defeats between March and April seeing Bradford mired in the bottom three.

Wins against Sunderland and Wimbledon offered hope of a miraculous escape, but a 3-0 loss to Leicester in their penultimate fixture took the wind out of Bradford sails.

The visit of Champions League-chasing Liverpool to Valley Parade further added to a sense of inevitability, but a spirited side caused a seismic shock with Wetherall’s winner ensuring survival.

15 #PL goals for David Wetherall, and 13 of them came with his head!

The former Leeds defender found himself free in the box to meet Gunnar Halle’s whipped free-kick,  with Bradford holding on to their 12th-minute lead in one of the division’s great upsets.

The term ‘fox in the box’ could easily have been coined to described Javier Hernandez, the former Manchester United and West Ham forward having made a habit of being in the right place at the right time.

Hernandez scored 53 league goals during his time in the Premier League, with every single strike coming from inside the confines of the 18-yard box.

The Mexican’s instinctive finishing was perhaps never better evidenced than this sublime headed effort against Stoke, an act of contortion that saw the forward adjust his body to send a backwards header beyond the goalkeeper.

We’re not sure this one can quite be filed as a ‘textbook header’, but it’s still brilliant nonetheless.

The early 2010s saw a blue moon rising, as super-club-in-waiting Manchester City sought to upset the established order amid their billionaire backing.

Roberto Mancini’s side had ended the club’s 35-year wait for a major trophy with FA Cup success in 2011, defeating arch-rivals Manchester United in the semi-final in the first demonstration of a shift in the balance of power.

The following season saw City take on their cross-town rivals in the Premier League title race, though found themselves eight points adrift of the defending champions with just six games to play.

Dropped points for the Red Devils against Wigan and Everton saw City reduce the gap ahead of a huge showdown at the Etihad, the home side knowing a win would take them top on goal difference with just two games remaining.

In a game of few chances it was club captain Vincent Kompany who rose to the occasion, powering home the only goal of the game to hand City control of the title race.

It was a lead that Mancini’s side would not squander despite final day drama against Queens Park Rangers, with Sergio Aguero’s stoppage-time goal securing a first league title for City since 1969.

The once ‘noisy neighbours’ were now champions of England for the first time in over four decades.