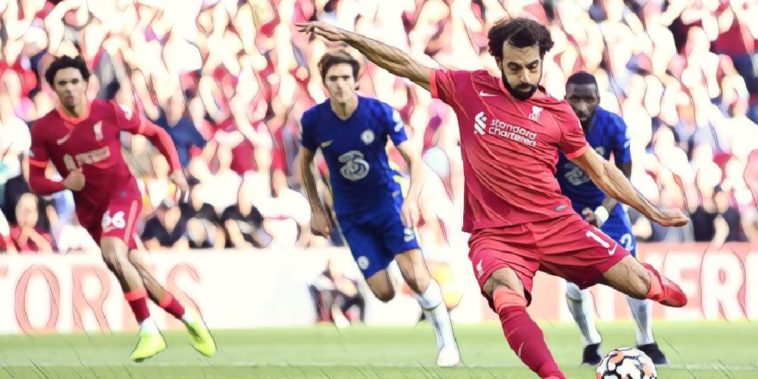 Liverpool were unable to capitalise as they played for 45 minutes against 10 man Chelsea with both sides playing out a 1-1 draw at Anfield.

The early pace of the game was somewhat frantic, with both sides looking to steal possession in midfield and spring quick attacks, Liverpool twice going close in the opening stages through Harvey Elliott and Jordan Henderson.

Much of the pre-match billing had focussed on the battle between Romelu Lukaku and Virgil van Dijk, though it would be Chelsea’s Champions League hero Kai Havertz who would score the opening goal of the game. The German took advantage of Liverpool’s zonal marking with a darting run to the near post to meet a Reece James corner before sending a sensational looping header over Alisson and into the back of the net midway through the first half.

Following the goal, the game had started to settle, though on the stroke of half time it was given a huge injection of drama. A goalmouth scramble saw Joel Matip’s header come off the bar before Sadio Mane’s follow-up effort was blocked on the line by Reece James. The block saw huge cries of handball from the Liverpool players and Anfield faithful, and having reviewed the footage – which showed the ball had come off the defender’s leg before hitting his arm – referee Anthony Taylor pointed to the spot and sent the Englishman off for the denial of a goalscoring opportunity.

After a minute or so of Chelsea protestations and attempts to get into the head of Mo Salah, the Egyptian confidently stepped up to send Edouard Mendy the wrong way as he dispatched the spot-kick and swung the momentum of the game massively in his side’s favour.

The red card saw Thomas Tuchel sacrifice goalscorer Havertz at the break, and it would leave Lukaku much more isolated as the spearhead of the Chelsea attack, Liverpool enjoying large swathes of possession with the visitors struggling to get out of their own half at times.

Liverpool had a whole number of attempts from range around the hour mark, with Henderson’s curling effort going narrowly wide, while Fabinho and Robertson both forced saves out of Edouard Mendy.

For all of their possession though, they struggled to truly lay the expected siege on the Blues’ goal as Tuchel’s 10 men held on for a point.

Liverpool failed to create a single big chance in the second half despite Chelsea having a man sent off in stoppage time in the first half.

Relsiance from the visitors or toothlessness from the hosts? 🤔 pic.twitter.com/DUDvp5M026

Speaking after the game, Jurgen Klopp admitted that Chelsea deserved a draw as he outlined the difficulty of playing against 10 men.

“I saw a really exciting game,” he told Sky Sports. “It was tough, it was hard for both teams. A really good first half. A good 45 minutes against the first situation of Chelsea, but conceded a goal…that’s not cool. Everybody that knows the Premier League knows that Chelsea are pretty good at defending and it was clear that the goal we scored was very deserved.

“I feel really for Reece [James] because it’s tricky, but it’s a clear penalty. So we forced it in that situation. We had a big chance with Hendo following a sensational pass from Trent. We played good.

“Second half, everybody thinks: ‘Come on’, but that’s only the first problem you have. There’s an advantage in possession, but the defensive structure only changes in the fact that they defend slightly deeper. They still have eight players and leave Lukaku up, but still eight players around the box, so we couldn’t use that.

“We had shots from distance, Mendy saved them, but I would have loved to have seen us closer for the rebound or whatever, but again, it was a good game, an intense game. I loved the intensity and the atmosphere we created and Chelsea deserved a draw, and we got a point as well so better than before.”

Asked if it would have actually suited his side’s attacking threat if James hadn’t been sent for an early bath, he said: “It’s obviously hypothetical, I don’t know, but the thing is as long as Chelsea try to do more for themselves, we can press them. I would have loved to see how they adapt and how we adapt. But that’s how it is. I don’t know how it would have been with 11 v 11, but now it’s 1-1 and it’s ok.

“It’s really early in the season and people like to make a big fuss of everything, but we drew against the European champions. That’s ok. A good start. Three games played, seven points, let’s go.”

Next up for Liverpool following the international break is a trip down the M62 to play Marcelo Bielsa’s Leeds United, and the German is hoping all of his players come back fit ahead of ‘one of the most intense games in the world of football’.

“We are in good shape, we just have to carry on,” he said. “There is no easy game. They go all the way [around the world], they come back on the Wednesday/Thursday, and on Sunday we play Leeds United – one of the most intense games in the world of football, because they run like madness and you have to put a proper shift in. If we were to play next week with a week of I’d say ‘Let’s go’, but we have to see how they come back.”