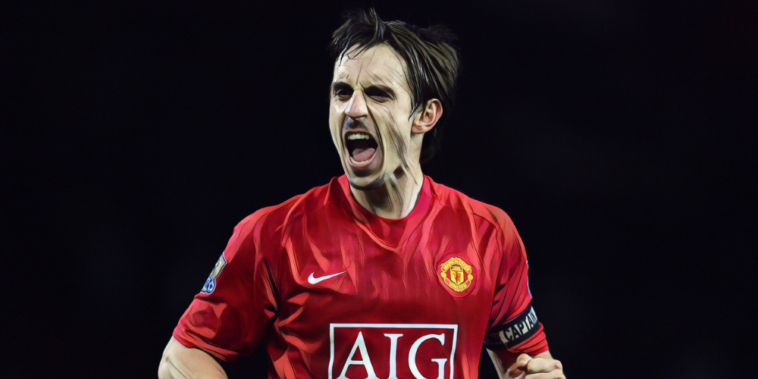 Harry Maguire’s status as Manchester United captain has again been called into question, the centre-back’s poor performances having led to calls for change at Old Trafford.

Maguire arrived at the Red Devils from Leicester under the weight of expectation of a record-breaking £80m price-tag, before being appointed club captain during a solid debut season.

However, his fortunes have fallen drastically in recent months and a series of calamitous showings this term have seen him become a regular target for the critics.

With his place in the side’s best XI – in addition to his position as captain – a subject of fierce debate at present, we’ve decided to look back and rate each of the Manchester United captains of the Premier League era.

Bryan Robson arrived at Manchester United in a British transfer record deal from West Brom, departing over a decade later as one of the club’s favourite footballers.

Robson was the Red Devils’ leading light during the eighties, an all-action midfielder whose ferocious competitive drive, crunching challenges and goalscoring record saw him adored on the terraces.

Named as captain ahead of more senior figures in just his second season, he wore the armband with distinction as was named in the PFA Team of the Year in his first four campaigns at Old Trafford.

Robson was a brilliant leader for club and country and earned the nickname ‘Captain Marvel’ for his ability to grab games by the scruff of the neck, remaining club captain at United until his retirement in 1994.

His final two seasons – despite limited involvement – saw the Red Devils end their long wait for title success with back-to-back championships as the Premier League era was ushered in with United as its new dominant force.

Steve Bruce inherited the armband from Robson, with the centre-back captaining the side for much of those first two title triumphs in the midfielder’s absence.

Bruce made 414 appearances for the Red Devils during a career of huge success and captained the side to a domestic double during the 1995/96 season.

Having inherited the daunting task of replacing Robson as captain, he led the side in impressive fashion across two seasons before leaving for Birmingham City in 1996.

Eric Cantona was a popular appointment as Manchester United captain upon Bruce’s exit, with the enigmatic forward having been the defining footballer of the Premier League’s early seasons.

Cantona’s arrival had been the catalyst for the Red Devils’ emergence as England’s finest side and the Frenchman was a talent who inspired those around him with his performances and match-winning moments.

The first foreign footballer to captain the club, he was an influential figure as United won the Premier League title in 1996/97 before announcing his shock departure and retirement from the game.

Has there ever been a more influential captain in the Premier League era?

Keane was the outstanding candidate to take the armband and developed into one of the most feared and formidable leaders in the league, with his relentless will-to-win contributing to some huge occasions for the side.

Few can forget his all-action display in the Champions League semi-final win over Juventus during the 1998/99 campaign, a selfless performance – in the knowledge he would miss the final through suspension – to help drag the Red Devils through.

Keane expected nothing less than the highest standards and his intimidating aura improved the levels of those around him, the midfielder becoming the most successful captain in the club’s history after winning four Premier League titles among his nine major honours lifted.

Gary Neville took on the responsibility following Keane’s controversial exit from Old Trafford, having been a stalwart of the side throughout the club’s Premier League dominance.

The right-back’s extroverted passion for the side made him a popular figure on the terraces, though his reign as captain coincided with the start of his decline in importance to the side.

He was club captain during a period in which Sir Alex Ferguson’s final great side dominated, but made just one appearance as the club won a Premier League and Champions League double in 2007/08 due to fitness issues.

18 years ago today, Gary Neville snubbed Schmeichel in the tunnel.

🗣 Neville: “He left us and basically said he was retiring abroad, then he came back and joined Manchester City. You can’t play for them, that’s just written in stone.” #MUFC pic.twitter.com/PZLuRrhTdm

Neville retired in 2011 after six seasons served as captain, ending a one-club career with 602 appearances in all competitions for the Red Devils.

Nemanja Vidic took over as club captain during Neville’s final season before retirement, the imposing Serbian centre-back having become a cult figure on the Old Trafford terraces.

His full-blooded commitment to defending made Vidic one of the Premier League’s best defenders, forming an iconic partnership alongside Rio Ferdinand that proved the bedrock of much success.

Where does he rank among your all-time favourite #PL centre-backs? pic.twitter.com/JcmtfBNqhD

Vidic’s first season as captain saw him named as the Premier League’s Player of the Season, leading the Red Devils to a record-breaking 19th league title.

He hoisted aloft title number 20 during Sir Alex Ferguson’s final season as manager, before departing for Inter Milan on a free transfer the following summer.

Iconic Duos: The Tank and The Rolls Royce, Vidic and Ferdinand

Having spent a decade in the club’s colours, Rooney was appointed as Manchester United captain following the arrival of Louis van Gaal as manager.

His second season saw the Red Devils win the FA Cup after beating Crystal Palace at Wembley, before adding the Europa League and League Cup under Jose Mourinho in 2016/17.

Rooney – who became the club’s all-time record goalscorer with 253 goals in all competitions – struggled for regular football during that final campaign and returned to Everton at the season’s end.

It brought the curtain down on an illustrious Old Trafford career, in which the forward won five Premier League titles and became one of just two Englishmen – alongside former teammate Michael Carrick – to win a full set of major honours at club level.

Michael Carrick’s status as the club’s longest-serving player saw him named as Rooney’s successor, spending just one season in the role before his own exit.

Carrick made just five appearances for the campaign as he recovered from a procedure to correct an irregular heart rhythm, having suffered from dizziness during training and matches.

It's Carrick, you know… pic.twitter.com/3jOR65Dzxo

The midfielder called time on a career of huge success at the end of the 2017/18 season, moving onto the club’s first-team coaching staff where he remained until 2021.

Another experienced figure who struggled with injuries after being appointed club captain, Valencia made just nine appearances during his sole season as skipper in 2018/19.

The Ecuador international had been a valued member of the squad for a decade and had captained the side to Europa League success in the absence of Rooney and Carrick in 2016/17.

After 339 appearances in all competitions for the Red Devils, he returned to South America to sign for LDU Quito.

The lack of natural leaders within the Manchester United dressing room saw the armband passed between the club’s most experienced names, with Ashley Young appointed as club captain under Ole Gunnar Solskjaer.

Young had reinvented himself at full-back after struggling for opportunities further forward, but his season as captain saw him make just 12 league appearances before signing for Inter Milan in the 2020 January transfer window.

Young’s exit saw Solskjaer turn towards Maguire as captain, the defender having made an instant impression on his manager after a record-breaking £80m move to Old Trafford the previous summer.

Maguire arrived as the most expensive defender in football history and he was viewed as a centre-piece in the club’s rebuild having impressed for England at the 2018 World Cup.

Maguire enjoyed a solid first season with the Red Devils and helped the side to a runners-up finish last season, but his fortunes have deteriorated during the 2021/22 season.

The 28-year-old has been in disastrous form, including a calamitous performance against former side Leicester in which he was arguably culpable for all four goals in a 4-2 defeat.

Maguire’s off-pitch demeanour has done little to improve his standing among the supporters, whilst continued reports over a divided dressing room indicate he has failed to control an increasingly bleak situation.

The mundane soundbites he has often repeated to the media have added to his unpopularity, with former captain Roy Keane having been amongst the biggest critics of his captaincy.