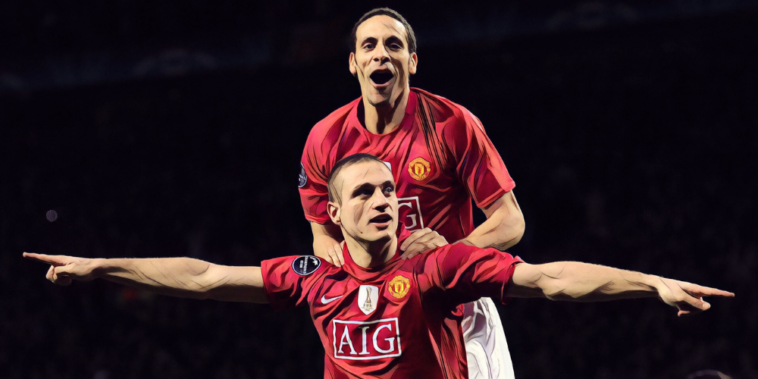 Those are the words of Sir Alex Ferguson, a man who became the most successful coach in British football history during a glittering and unprecedented period of success at Manchester United.

No man as ever won more Premier League titles than Ferguson, none have even come close. That pearl of wisdom from the Scot has been regularly regurgitated in the years that have since passed, with Ferguson of the unwavering belief that a solid foundation is the key to a championship-winning side.

Fortunately, he was able to call on no shortage of superb defensive stalwarts, but perhaps no partnership can truly rival that of Rio Ferdinand and Nemanja Vidic.

Individually the duo became two of the greatest centre-backs the Premier League has witnessed, but in tandem their legend was only enhanced.

The perfect partnership is comprised of two footballers whose attributes prove a complimentary combination and their contrasting manners blended brilliantly as the bedrock of Ferguson’s final iconic side.

Ferdinand was the first to arrive as a Manchester United player four seasons before his long-term partner, with the Red Devils breaking the British transfer record to prise the England international from Leeds.

Ferdinand had earlier set a British record and landmark fee for a defender when signing for Leeds from West Ham, reclaiming both records following the completion of a £29m move across the Pennines in 2002.

His arrival helped to fill a void that had been left since Jaap Stam’s departure for Lazio, with his impact on the side immediate as the Red Devils won the Premier League title during his debut season.

The fortunes of both club and player dipped somewhat across the following campaigns however, as a suspension for a missed drugs test, Arsenal’s ‘Invincibles’, and the rise of a billionaire-backed Chelsea made for a challenging period.

Ferguson’s rebuild and search for a suitable centre-back partner for Ferdinand took him to the Eastern end of the continent, as the relative unknown Vidic arrived from Spartak Moscow during the 2006 January transfer window.

Vidic’s initial performances were far from assured, but after a period of adaptation he began to grow into his role as a Manchester United player.

Finding his feet during those opening six months, his first full season saw the Serbian play a prominent role as the Red Devils reclaimed the Premier League title from Chelsea.

The duo’s burgeoning partnership showed encouraging signs as the champions conceded just 27 goals for the campaign, the PFA Team of the Year including eight players from Ferguson’s triumphant side.

Vidic and Ferdinand were both included, as were full-back pairing Gary Neville and Patrice Evra and goalkeeper Edwin van der Sar – an indication of the side’s defensive strength.

That season proved the birth of Ferguson’s final iconic side, with the following campaign one of the greatest in the club’s storied history.

Vidic and Ferdinand were once again named as the Premier League’s best defensive duo as the title was retained, but it was in Europe where the centre-back stalwarts reached new levels.

United progressed through the Champions League in unbeaten fashion, eliminating an emerging Barcelona force in the semi-finals to secure an all-Premier League showdown with rivals Chelsea in Moscow.

As the Russian rain soaked the scene at the Luzhniki Stadium, Ferdinand and Vidic stood tall as two pillars of strength.

United edged a tense final on penalties with Ferdinand – captain for much of the campaign in the absence of Gary Neville – hoisting aloft club football’s biggest prize.

The newly-crowned champions of Europe had conceded just six goals on route to their coronation, sealing a historic double as a third European Cup was added to the Red Devils’ expanding silverware cabinet.

Champions of both England and Europe, the trophies continued to arrive with a third league title in succession, becoming just the fifth side in English football history to achieve the feat in 2008/09.

Boasting the division’s best defensive record, that season saw the Red Devils set a new record after going 14 consecutive league fixtures without conceding a goal – with both Ferdinand and Vidic nominated for the PFA Player of the Season award at the end of the campaign.

Whilst teammate Ryan Giggs ultimately scooped that individual accolade, there was recognition for Vidic who became the first defender to win the Premier League’s Player of the Season award.

Further winners’ medals were collected in the League Cup, but hopes of defending the Champions League ended with final defeat, as Pep Guardiola’s Barcelona outclassed the holders in Rome.

That three-season run of form saw Ferdinand and Vidic cement themselves as two of the best defenders in world football, the perfect partnership of poise and power, silk and strength.

The Yin to one another’s Yang, their obviously opposite methods of defending blended brilliantly, with Ferdinand unflappable and Vidic uncompromising.

Ferdinand exuded calm and would often anticipate danger but it had even unfolded, whilst Vidic was a man prepared to throw his head where others wouldn’t place their feet.

That third title in succession proved the end of a perfect partnership at its peak, as injuries began to mount for both players.

Ferdinand missed much of the following campaign as Carlo Ancelotti’s free-scoring Chelsea side were crowned champions in 2009/10, whilst his appearances were limited once more despite United’s reclaiming of their throne in 2010/11.

That latter season saw the Red Devils reach a third Champions League final in four seasons, but once again found Barcelona’s iconic team of the era in their path.

United were soundly beaten at Wembley as the Lionel Messi-inspired Catalans claimed another European crown, the side that had dominated the landscape in England having reached the end of its cycle.

Vidic was named as the Premier League’s Player of the Season for the second time in three campaigns in 2011, but the days of the duo working in tandem were numbered.

The winds of change began to sweep around the club as their defensive stalwarts aged, with Vidic and Ferdinand starting just 31 league fixtures together across their final three seasons at Old Trafford.

Names such as Phil Jones, Chris Smalling and Jonny Evans were introduced as heirs, but following in the footsteps of the iconic duo proved a void too large to fill.

The summer of 2014 saw both players leave on free transfers, with Vidic signing for Inter Milan and Ferdinand returning to his native London to join Queens Park Rangers.

Neither made a huge impression in short spells before retirement, but their impact at Manchester United will last the test of time.

The Stretford End would roar with approval as Vidic clattered crushingly into his next victim, whilst Ferdinand’s grace was often the calming presence needed to keep the Serbian’s enthusiasm for defending on the right side of the line.

The abiding and nostalgic memory of the Ferdinand-Vidic axis is their contrasting characteristics, but both could quite easily take on a role reversal in a different defensive dynamic.

The former was strong and powerful in addition to his poise in possession, whilst Vidic was a far better footballer than he has often been given credit for post-retirement.

Each on their own were brilliant footballers and amongst the best defenders of their era, but in harmony found a level that has left them as legends.