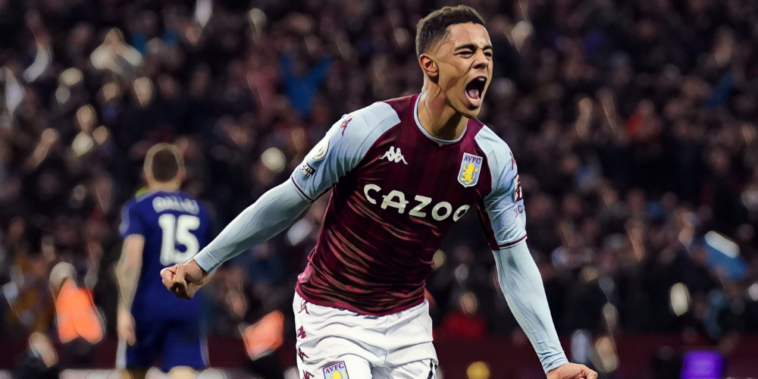 The 2021/22 season has seen several bright prospects make their mark in the Premier League, a number of names enjoying seasons of real breakthrough.

Academies in England have thrived in recent seasons and several teams are now bearing the fruits of their labour, as home-grown talents break in and make an impact at Premier League level.

We’ve decided to look at some of the best prospects rapidly turning into first-team stars, here are five Premier League players enjoying breakthrough campaigns in 2021/22.

Conor Gallagher has captured the headlines since swapping Chelsea for Crystal Palace last summer, the midfielder flourishing during a season-long loan spell at Selhurst Park.

Chelsea’s academy system has been a production line of talent in recent years and Gallagher is another who has shone since being handed a chance in the Premier League, emerging as one of the signings of the season for Patrick Vieira’s side.

Gallagher’s relentless running has been a major factor in Palace’s new-look side this season, his box-to-box energy adding a new dimension to the Eagles.

🎙️ "He started it, and boy has he finished it!"

The 21-year-old seals the deal for #CPFC with a stunning strike 💥 pic.twitter.com/xZOaDsjN3c

The 22-year-old was named as West Brom’s Young Player of the Season despite relegation last season, but has taken his game to new levels during a second successive loan away from Stamford Bridge.

Gallagher has scored seven goals and provided three assists for Palace, his form earning the midfielder a first call-up and cap for England during November’s international break.

His late arrivals into the box to score goals have drawn comparisons with Frank Lampard and Gallagher will be hoping to follow in the club great’s footsteps with a prominent role in Thomas Tuchel’s squad next season.

Armando Broja is another of Chelsea’s Cobham graduates shining in rival colours this season, the Albania international having starred since signing on loan for Southampton.

Broja arrived on a season-long loan deal after an encouraging spell at Vitesse Arnhem and has handled the step-up to the Premier League in fine fashion, scoring six goals in just 11 league starts.

The 20-year-old is the leading u20 goalscorer in the Premier League this season, though his all-round game has also impressed with Broja proving a thorn in the side of centre-backs much his senior.

Armando Broja with a lovely instinctive finish to catch out Lloris 👌 pic.twitter.com/HOpehhDNPI

The forward possesses pace and a robustness to handle the rigours of Premier League football, whilst his finishing has been excellent for a player of his inexperience.

Chelsea’s lack of forward options makes a return to west London feasible next season, though there are several Premier League rivals interested in prising Broja from the club on a permanent basis.

Southampton will be front of the queue after a fine season of service so far, whilst West Ham have also been linked with a player who boasts a high ceiling.

Tino Livramento also deserves a mention after swapping Chelsea’s academy for St Mary’s, the right-back having earned a long list of admirers for his performances this season.

Jacob Ramsey has had the pundits purring in recent weeks following a series of outstanding performances for Aston Villa, with the midfielder fast emerging as a key figure in Steven Gerrard’s side.

Gerrard has been full of praise for the 20-year-old, admitting it is a matter of time before the academy graduate earns England recognition.

“I know the level of the England players, I’ve been around it, and have enough experience to know it’s only a matter of time but let’s all be sensible and keep calm about it,” Gerrard said to BT Sport after watching Ramsey score twice in this month’s 3-3 draw with Leeds.

Jacob Ramsey is heading to the top 💫 pic.twitter.com/Fn8D9H9NuG

There are elements to Ramsey’s game that are certainly reminiscent of Gerrard himself, including his athleticism to burst forward from midfield and a power into the box.

Ramsey’s timing of his runs and finishing has been outstanding in recent weeks, with the Great Barr youngster having now scored four goals in his past six Premier League appearances.

He has the perfect manager to learn from as an all-action Premier League midfielder and his emergence has been a welcome boost to a Villa side surrounded in optimism at present.

Harvey Elliott’s season may have consisted of just five Premier League appearances and one horrific injury, but there is little doubt that the Liverpool teenager has left a major impression on his manager.

Elliott returned to Liverpool last summer after an impressive season-long loan spell at Blackburn, scoring seven goals and providing 11 assists for the Championship side.

After winning the trust of Jurgen Klopp during the pre-season, the midfielder started three of Liverpool’s opening four Premier League fixtures and shone as the conduit between midfield and attack.

A thing of beauty from Harvey Elliott 😍pic.twitter.com/Ub9YgkYIBo

Trusted in a central role despite breaking through as a winger, his link-up with the likes of Mohamed Salah and Trent Alexander-Arnold was encouraging during the season’s opening weeks and Elliott has stated his case for inclusion ahead of more senior names.

The teenager returned to the side and scored his first senior goal with a wonderful effort against Cardiff last weekend, lashing home an instinctive effort in the FA Cup’s fourth round.

After another substitute appearance against Leicester last time out, he will be hoping to regain his place in the side ahead of the run-in with Elliott a talent for both now and the future.

Trevoh Chalobah has been the surprise package in Chelsea’s season, the defender having earned a shock breakthrough into Thomas Tuchel’s plans.

Chalobah has spent the past three seasons on various loan deals, with few having envisaged the centre-back becoming a part of the senior side at Stamford Bridge.

The 22-year-old’s impressive performances in pre-season earned him a chance and its one he has grasped, making 21 appearances in all competitions for the west Londoners.

Chalobah has provided valuable depth following the departure of Kurt Zouma and has performed admirably in multiple roles, his performances rewarded with a new long-term contract in November.

Chalobah – who joined the Chelsea academy aged eight – has shown admirable composure and confidence during his breakthrough campaign and his displays will have been watched closely by Gareth Southgate and England.