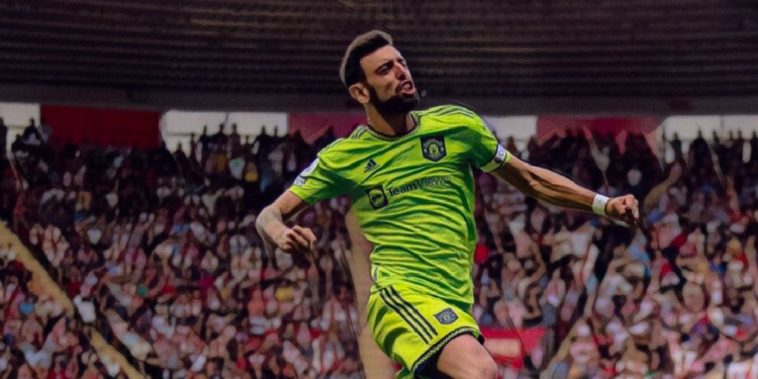 Bruno Fernandes has appeared somewhere closer to his best across Manchester United’s past two fixtures, with the midfielder impressing in back-to-back wins over Liverpool and Southampton.

Fernandes scored his first goal of the Premier League season in a 1-0 win over the latter on Saturday, cushioning a fine finish into the far corner after arriving late into the box.

The Portugal international has made goals from midfield a habit and we’ve decided to rank the most prolific midfielders in the division since his arrival at Old Trafford.

Here are the Premier League midfielders to score most goals since Fernandes’ Man United debut in February 2020.

James Ward-Prowse has provided a reliable source of goals at Southampton, with the midfielder’s wonderful technique having made him a threat from both set-pieces and open play.

Ward-Prowse has scored 20 league goals since February 2020, including a career-best campaign of ten Premier League goals in 2021/22.

Don’t give James Ward-Prowse the opportunity 🎯

The 27-year-old has taken over spot-kick duties at Southampton, while his prowess from free-kicks is well known with the England midfielder regarded as one of the best takers in world football.

Nine of his 20 goals have come from free-kicks (45%) with Ward-Prowse now second in the Premier League’s all-time charts for free-kick goals scored (14). Only David Beckham (18) has ever scored more.

James Maddison is another name who enjoyed the best goalscoring form of his career last season, with the Leicester midfielder netting 18 goals in all competitions for the Foxes.

Maddison scored 12 league goals and laid on a further 10 assists in 2021/22, form which has led to calls for the 25-year-old to earn an England recall.

He has began the new campaign in impressive form despite Leicester’s winless start, scoring twice and creating another across the Foxes’ first three fixtures.

Maddison’s improved record around goal has taken his game to new levels across the past 18 months and he ranks fourth among all Premier League midfielders for goals scored since February 2020.

Pep Guardiola’s tweak of Ilkay Gundogan’s role has unlocked a new gear from the midfielder in recent campaigns.

The Germany midfielder was granted licence to venture forward and responded with 13 league goals, form which earned Gundogan inclusion in the PFA Premier League Team of the Year. Last season he added a further eight goals, including a match-winning double off the bench as City sealed a second successive title on the final day of the season against Aston Villa.

The pass from Ederson and the finish by Ilkay Gundogan 🤩#GoalOfTheDay x @ManCity pic.twitter.com/5kTYNj5lFB

After periods out of favour last term, he has returned to the side during the season’s opening weeks and has two goals and an assist in three Premier League starts.

Kevin De Bruyne is ranked second for goals among Premier League midfielders since Fernandes’ debut, having scored 28 goals across that period.

De Bruyne has long been hailed as the division’s best creative force, having rose to eighth in the all-time charts for assists. However, last season saw the two-time Premier League Playmaker of the Season up his goalscoring levels with a career-best campaign for Manchester City.

The 31-year-old scored 15 league goals during City’s title-winning campaign, more than any midfielder in the division and level with the likes of Diogo Jota and Jamie Vardy.

His finest hour came in the win at Wolves in May, as De Bruyne’s four-goal haul restored City’s lead at the top of the division. He became just the fourth midfielder to score four times in a Premier League fixture, after Frank Lampard and Georginio Wijnaldum.

No midfielder has scored more goals in the Premier League than Bruno Fernandes since his debut, with the Portugal international comfortably clear at the top of the rankings.

Fernandes’ winner at Southampton last weekend was his 37th goal in the Premier League, with only Heung-Min Son (45), Harry Kane (49) and Mohamed Salah (54) having scored more since his arrival into English football.

The 27-year-old’s best campaign came in 2020/21 as he scored 28 goals in all competitions for the Red Devils, setting a single season record for a Premier League midfielder after eclipsing Frank Lampard’s 27-goal 2009/10 campaign.

Fernandes’ performances dropped last season as he adjusted to a new role, but he managed double figures (10) for a second successive campaign and will hope to return to his best levels after encouraging signs in recent fixtures.