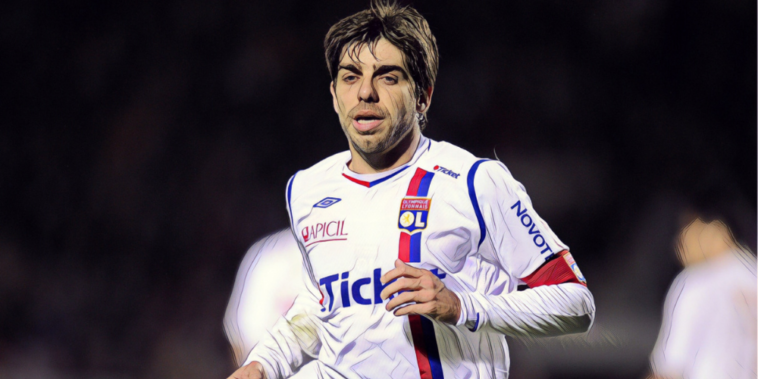 Juninho Pernambucano will forever be associated with the art of free-kick taking. There have been a wealth of players before and since with wondrous ability from dead balls, but not have mastered the skill quite like the Brazilian.

In the confines of a team sport his individual genius has ensured a truly lasting legacy, a not-so-secret weapon that was both lauded and feared.

Juninho was more than just a fabulous free-kick taker, he was a midfielder who exerted control and a leader in a Lyon side that dominated the landscape in France for almost a decade, but the abiding memories of his magic are his signature, spectacular set-pieces.

His journey to notoriety began with local side Sport Recife, where he won two regional titles before signing for Vasco da Gama in 1995.

The emerging midfielder was surrounded with leading talents during his time with the Brazilian side, with national team figures in Romario, Edmilson and Juninho Paulista among his teammates across his six seasons with the club.

It was a successful period for both Juninho and Vasco, twice winning the Brasileirão and impressing as the club won a maiden Copa Libertadores in 1998, scoring in the semi-final win against Argentina’s River Plate.

Whilst most of Brazil’s brightest talents are snapped up quickly from sides across the Atlantic, Juninho remained with Vasco for six seasons and it was not until the age of 25 that he made the move to Europe.

The move occurred following a court ruling in the midfielder’s favour, allowing him to sign for Lyon as a free agent. Despite the manner of his exit, it did not diminish his status as a fans’ favourite, with two later spells at Vasco maintaining his bond with the club’s supporters.

Juninho’s arrival in Ligue 1 opened European football’s eyes to the mastery of his technique, as the Brazilian became the best exponent of the ‘knuckleball’ technique now commonly used at the elite level.

It is a striking technique that sends the ball on an unpredictable trajectory, chaotically swerving and dipping until it reaches its intended target. None have perfected quite like Juninho.

“I started by copying free-kicks taken by Marcelinho, who played for Corinthians,” he told FourFourTwo on his free-kicks.

“He was one of my inspirations, and the first player I had ever seen hit the ball head on and make it dance in the air. Didi, who won the World Cup with Brazil in 1958 and 1962, was doing it back then, too. Everyone since has just been tweaking the formula.”

Lyon were beginning to emerge as force in Ligue 1 upon Juninho’s arrival, a strong finish to the previous season – including a run seven consecutive wins to conclude the campaign – seeing Jacques Santini’s side finish as runners-up to Nantes.

Sonny Anderson’s goals had fired their charge and the addition of his creative compatriot to the club’s midfield took Lyon to a new level, as a first ever Ligue 1 title was won in 2001/02.

Having taken more than a century to win their first top-flight crown, few could have envisaged the period of dominance that was to follow.

Despite the exit of Santini to become manager of the France national side, Lyon went from strength to strength and it was Juninho pulling the strings from the centre.

He scored 13 league goals – including a hat-trick against Auxerre – as Lyon retained the title the following season and was instrumental as the club won Ligue 1 again, and again, and again.

Lyon won seven consecutive championships to emerge as France’s finest footballing side, but were unable to turn domestic dominance into continental success despite Juninho often lightning up the Champions League stage.

His first free-kick in Europe’s leading competition came against Bayern Munich in 2003/04, a wondrous effort that left one of the world’s greatest goalkeepers, Oliver Kahn, crumpled into the side netting as his desperate dive proved futile.

Rewatch the replay and there’s a visible moment in which Kahn – and the ball boy moving across in the background – realise late that Juninho’s effort is bending back towards the top corner.

No one will ever do free-kicks like Juninho Pernambucano 🤩pic.twitter.com/OcticqtOjl

It was a goal and win that issued a statement of intent from Lyon, but their run was ended in the quarter-finals by a charismatic coach named Jose Mourinho and an unfancied Porto side that would be crowned champions of Europe at the season’s end.

Juninho’s reputation continued to enhance as his free-kick collection grew ever larger, anxiety and anticipation sweeping across stadiums as he placed the ball down, dependent on which side your allegiances fell.

Had another player taken aim from the distances and angles Juninho did, there would no doubt be groans across the masses. But not Juninho, he was a man capable of the unthinkable.

The knuckleball technique has proven increasingly popular in the modern game, a method in which the ball does not spin as it flies through the air and its stability ensures a topsy-turvy trajectory that makes its path almost impossible to read.

Juninho’s free-kicks moved in a way that saw them often look as if they were heading anywhere but the goal, before deviating beyond the goalkeeper and into stanchion.

His most productive season came in 2005/06 as he scored seven free-kicks in all competitions, including three in the Champions League’s group stages and a later run of three free-kicks in three games across a period of just eight days.

PSV Eindhoven, Ajaccio and Le Mans were all on the wrong end of set-piece specials from the midfielder, with the second of those arguably his very best.

Such is the distance, Juninho’s run-up begins on the edge of the centre circle as he lines from an inconceivable range.

Without a second thought and with one swing of his magical right foot he let fly, sending the ball on its own out-of-body experience as it veered venomously towards goal.

It was the kind of goal that defies belief, but one Juninho’s teammates had become somewhat accustomed to.

Juninho ended the season named as Ligue 1’s Player of the Year, the second of four consecutive awards to Lyon as Michael Essien, Florent Malouda and Karim Benzema all won the prize.

Whilst those names eventually departed for Europe’s elite clubs, Juninho remained a constant in the side during the most successful era in Les Gones’ history.

He remained with Lyon until the 2008/09 season, his final campaign including another classic effort during a Champions League clash with Barcelona.

Pep Guardiola’s side were on a path towards treble success, but found Lyon awkward opposition in the last 16 after being held to a 1-1 draw in France.

The host’s goal came from a predictable source, as a Juninho free-kick from near the byline bamboozled Victor Valdes who – suitably flustered – comically stumbled backwards into his own goal.

Lyon vs Barcelona is a classic Champions League tie 👌

When the sides met back in 2009, we witnessed this scorching free-kick from Juninho Pernambucano 😱 pic.twitter.com/cjFDT2hcxS

He ended his career with Lyon as a winner of seven league titles and the Coupe de France, boasting a record of 100 goals from 343 appearances – an incredible 36 of which came from free-kicks.

His impact was unquestionable and his mastering of one of football’s great arts proved a lucky charm for Lyon, who never once lost in a fixture in which Juninho converted a set-piece special.

Juninho moved on to sign for Al-Gharafa in Qatar as his career wound down, later having two spells with former club Vasco either side of a short stint in MLS at New York Red Bulls.

He earned 40 caps for Brazil and won the Confederations Cup in 2005, but failed to make enough of an impact at international level to cement his status with the Selecao, having been overlooked for the nation’s victorious 2002 World Cups squad in Japan and South Korea.

Juninho’s legend is in Lyon, whilst in the eyes of many football fans there has perhaps never been a better free-kick taker than the brilliant Brazilian who bended the ball to his whim.

David Beckham might be the first name that comes to mind for a casual fan discussing free-kicks, but for those who watched Juninho’s finest football in France there is only one contender as the greatest set-piece taker of his generation.

He might just be the best of any generation.