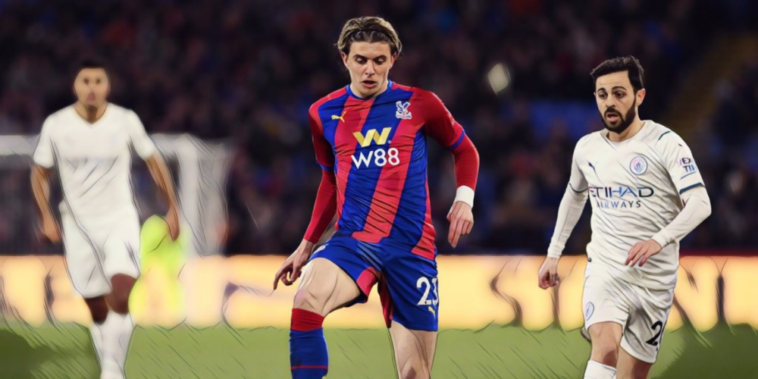 Manchester City’s title hopes suffered a setback after a goalless draw at Crystal Palace recently, with the Eagles having proven awkward opposition for the Premier League champions in recent campaigns.

Pep Guardiola’s side have failed to win in both league fixtures with Palace during the current campaign, Patrick Vieira’s outfit having earned a 2-0 win at the Etihad before the stalemate in South London.

Dropped points have been a rarity for Guardiola’s team in recent seasons during a period of domestic dominance, and we’ve decided to look at the five Premier League clubs that have City have dropped the most points against during his reign.

Here are the five PL clubs Manchester City have dropped the most points against since Pep Guardiola’s arrival at the Etihad in 2016.

Manchester City have dropped five points against Crystal Palace in the 2021/22 season alone, a figure which has seen the Eagles rise to fifth on this list.

City fell to a 2-0 defeat to Patrick Vieira’s side in October, as goals from Wilfried Zaha and Conor Gallagher secured the South Londoners a shock win at the Etihad.

Only two teams have prevented Pep Guardiola’s Man City from scoring across both Premier League games in a single season:

Palace repeated the trick in frustrating City with a goalless draw recently, digging deep – and riding their luck – to secure a precious point against the league leaders.

Palace’s win at the Etihad earlier this season was the second time the club have won a Premier League fixture at Manchester City since Guardiola’s arrival, having secured a 3-2 win in December 2018 in a game that saw Andros Townsend score an outrageous volley from distance.

Guardiola has often found Chelsea difficult opposition since his arrival into English football, with the west Londoners completing a Premier League double over City – on their way to winning the title – during the Spaniard’s first season in charge.

Chelsea have been City on a further three occasions in the Premier League since Guardiola’s appointment, whilst the Blues also won three fixtures in quick succession, across three different competitions, during the 2020/21 season.

The most painful of those defeats for Guardiola came in the Champions League final, as Kai Havertz’s winning goal extended City’s wait for a first European title in Porto.

Manchester United have seen their cross-town rivals emerge as the Premier League’s dominant force in recent seasons, having spent the previous two decades with City firmly in their shadow.

Guardiola has been in charge of 12 Manchester derby fixtures in the Premier League, losing on four occasions to the Red Devils with a further two draws and six wins.

United have tended to enjoy greater success in away derby fixtures at the Etihad, winning four of the last six meetings at City in all competitions.

However, City secured a derby double over United during the current campaign including an emphatic 4-1 win on home soil earlier this month.

Liverpool have emerged as the challengers to Manchester City’s domestic dominance in recent campaigns with the two having gone head-to-head for major honours, sharing each of the last four Premier League titles.

City have dropped 17 points in league fixtures with Liverpool since Guardiola’s appointment, though their record against the Reds has improved after finding Jurgen Klopp’s team difficult opponents during the early part of his reign.

City have lost just one of the last eight meetings in all competitions, having lost five of the previous seven against Liverpool.

That record could bode well ahead of the season’s run-in, with the duo competing for the Premier League title and due to meet in the FA Cup semi-finals next month. There is also the possibility of a Champions League final between the teams, should each progress from the current quarter-final stage.

Manchester City have dropped more Premier League points against Tottenham than any other side since Guardiola’s arrival as manager.

The North London side’s record against City includes a league double over the champions this season, securing a 1-0 win in the capital on the opening weekend of the season before edging a 3-2 thriller at the Etihad in February.

The highlights from an unforgettable night in Manchester 🍿 pic.twitter.com/2WdGdWihtj

Spurs have won four of the past five Premier League meetings between the sides, and have won on each of the last three occasions that City have visited the Tottenham Hotspur Stadium.

Read Also – Five of the most memorable El Clásico thrashings