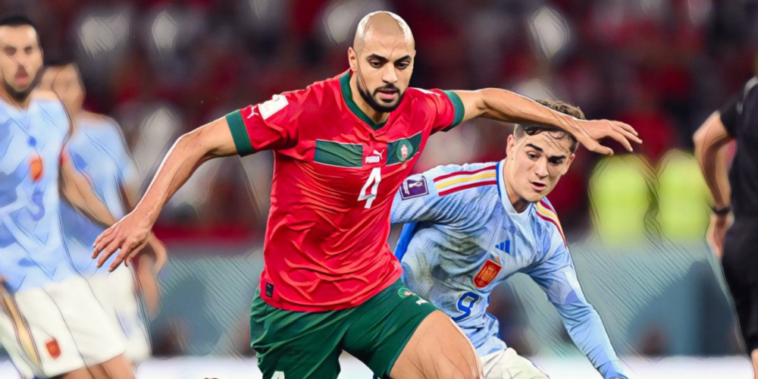 Sofyan Amrabat was one of the stars of the World Cup in Qatar, with the Moroccan midfielder the heartbeat of the first African team to reach the semi-finals.

Predictably, his performances have not gone unnoticed and the Fiorentina stars finds himself at the centre of transfer speculation as the January window fast approaches.

With his stock high and just 18 months remaining on his contract, now could be the time for the Serie A side to cash in on the in-demand star.

So for those of you interested in the best sites for online gambling like Casinority Niemcy, here are the bookmakers’ five favourites to sign Sofyan Amrabat.

Atletico Madrid have been credited with an interest in Amrabat, who has emerged as one of European football’s most wanted men following his World Cup displays.

It is easy to envisage Amrabat’s style being well-suited to the demands of Diego Simeone at Atletico, with the midfielder tireless and tenacious throughout Morocco’s campaign in Qatar.

The midfielder has discussed the rumours linking him with Atletico and was full of praise for the Spanish side, Simeone, and their brand of football.

“It is a real honour to be linked with this type of club,” Amrabat told Spanish newspaper Marca.

“I have a great coach at Fiorentina, Vincenzo Italiano, so I don’t like talking about others. But obviously, everyone knows what Simeone achieved and I like his style of football. He won a great deal and I have a lot of respect for him.

“The players in his squad are physically strong and aggressive. I like playing that way too. I read that Morocco have been compared to Atletico Madrid and there are some similarities.”

Chelsea’s midfield options could be given a shake-up in the coming windows, with both Jorginho and N’Golo Kante out of contract at the end of the season.

Amrabat would add steel to the centre of the Chelsea side and could prove a fine compliment for Mateo Kovacic and Mason Mount as Graham Potter looks to reshape his squad.

Chelsea invested a record-breaking £272m during last summer’s transfer window as co-owner Todd Boehly provided huge funds, but the west Londoners have since sacked Thomas Tuchel and brought in Potter as his replacement.

Boehly will be keen to hand his new head coach resources of his own, as Chelsea look to improve results and secure a top four finish in the Premier League.

Tottenham were credited with an interest in signing Amrabat during last year’s January transfer window, with Antonio Conte understood to be a long-term admirer of the Morocco midfielder.

Amrabat was considered as Conte sought to add to his midfield last winter, before Spurs instead agreed a deal to bring Rodrigo Bentancur in from Juventus.

The north Londoners could reignite their interest in the World Cup star, whose work-ethic and ball-winning abilities appear tailor-made for the two-man defensive midfield pivot that Conte prefers.

Fiorentina are understood to be reluctant to lose Amrabat mid-season. However, a fee of €40m (£34.8m) could prove persuasive for a player who has just 18 months to run on his current deal.

Newcastle are riding a wave of momentum at present with Eddie Howe’s side third in the Premier League table as the season prepares to restart. The Geordies are attracting lots of interest from the type of online punters who visit Holenderskie Casinority and it will be fascinating to see how they do when the season restarts shortly.

It’s been an impressive campaign of progress for the Magpies, who could look to boost their Champions League credentials with additions in the January transfer window. Newcastle boast the finances to compete in the race for Amrabat and could offer the Moroccan an integral role in their ambitious project.

However, the Magpies are well-stocked in central midfield with Bruno Guimaraes, Joelinton, Joe Willock and Sean Longstaff having all impressed over the first half of the season, while Jonjo Shelvey has also recently returned from injury.

That said, Amrabat would provide a real injection of quality into the Newcastle engine room, where his defensive discipline could bring the best from the club’s more attack-minded midfielders.

Liverpool are the favourites to sign Sofyan Amrabat, as Jurgen Klopp looks to overhaul his midfield.

Midfield is the focus for Liverpool as the Reds look to rebuild their side, with a host of current options either ageing or out of contract at the end of the season.

Alex Oxlade-Chamberlain, James Milner and Naby Keita are all set to become free agents next summer, while Jordan Henderson and Thiago Alcantara are into their thirties. There are also concerns over Curtis Jones and Fabinho, who have struggled for form and fitness this season.

These photos of Sofyan Amrabat’s tackle on Kylian Mbappe are top tier. pic.twitter.com/KDiiA53eZu

The Reds have lacked the engine room intensity that has defined Klopp’s reign during a disappointing start to the season and Amrabat could prove an ideal solution, as an addition who would add commendable work-rate and bite.

With the club currently seven points outside the Champions League places as the Premier League season prepares to restart, a winter window arrival could provide Liverpool with a much-needed boost in midfield.