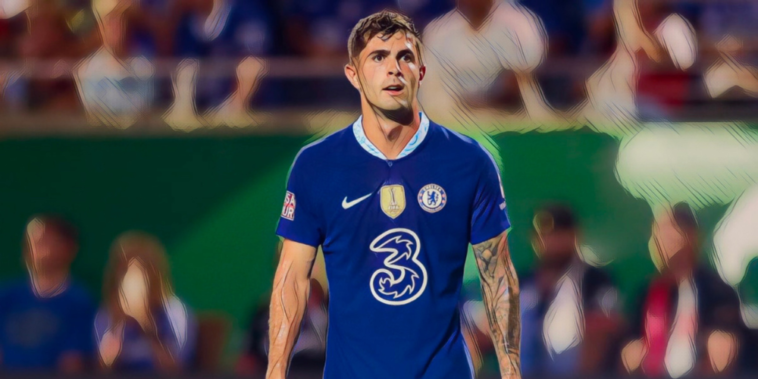 Christian Pulisic has been linked with an exit from Chelsea with the winger having expressed his frustration with a peripheral role at Stamford Bridge.

The US international has struggled for consistent form and fitness since arriving in west London and has featured for just 30 minutes across the club’s opening two Premier League fixtures.

With the World Cup fast approaching Pulisic wants to secure a regular role as he looks to approach the tournament in peak condition.

A number of clubs are reportedly monitoring his situation and Pulisic is sure to be a name we hear plenty of before the transfer window shuts in a couple of weeks’ time.

So for those of you who like to keep up to date with the best online gambling sites like Zamsino, we’ve decided to look at the bookmakers’ five favourites to sign the 23-year-old.

AC Milan are ranked as 20/1 outsiders to sign Pulisic this summer, with the Italian champions having been linked with a number of wide players.

The Rossoneri ended an 11-year wait for league title success last season and have since strengthened with a number of additions, bringing in Divock Origi on a free transfer from Liverpool and exciting Belgian prospect Charles De Ketelaere.

De Ketelaere’s arrival has perhaps lessened the need for reinforcements with the 21-year-old comfortable in a variety of roles off the front, while Junior Messias’ loan from Crotone has been made permanent.

Milan were linked with Pulisic’s Chelsea teammate, Hakim Ziyech, earlier in the window but interest from Italy appears to have cooled. Arsenal, Atletico Madrid, Roma and former club Borussia Dortmund can also be found at 20/1 odds to sign Pulisic.

Kostic and Di Maria will provide options in wide areas, but the Bianconeri continue to be linked with Pulisic. The American has been named as a transfer target and could unite with international teammate Weston Mckennie in Turin.

Ex-Juventus defender Georgio Chiellini discussed a potential deal last month and believes the Chelsea winger would prove a fine addition as Federico Chiesa continues his rehabilitation from an ACL injury.

“Honestly, it’s the first time I heard it, but I think Juventus needs some winger as Pulisic,” Chiellini said, as per ESPN.

“Pulisic is very good, I think, when he starts from the side and comes inside, and with the injury of Chiesa — he [will] surely still return, but not before September, and in the first months, surely he can play every game.

“With the [arrival] of Angel Di Maria, Pulisic could be the fantastic third winger for Juventus. He has improved year by year, he did a fantastic season in Chelsea.”

Newcastle could offer Pulisic the regular role he craves with the Magpies’ 4/1 to sign the winger. Eddie Howe’s summer spending has been more modest than most anticipated, given the backing of the club’s Saudi-led regime.

Newcastle remain in search of further additions however and Pulisic could improve the side’s goal threat. Amanda Staveley and Mehrdad Ghodoussi’s travelled to west London to watch Chelsea last weekend and are believed to have discussed a number of Blues’ players.

Callum Hudson-Odoi, Conor Gallagher and Armando Broja also understood to be on the club’s radar before the transfer deadline.

Pulisic is 2/1 to remain at Chelsea this summer, though will want assurances from Thomas Tuchel over his place in the club’s plans.

Last season the winger made just 13 starts in the Premier League and he will want significantly more minutes as he looks to find form ahead of the Qatar World Cup.

Chelsea’s wide options have struggled in the system Tuchel has preferred in west London however, with none of Pulisic, Hakim Ziyech, Callum Hudson-Odoi or the departed Timo Werner meeting expectations.

Manchester United are favourites to sign Pulisic this summer, having made an approach over a loan deal to sign the winger.

Pulisic is open to the move, but reports have suggested Chelsea will demand the 23-year-old extends his current two-year deal before the club will sanction a loan exit.

Erik ten Hag is in need of additions after a disastrous start to the Premier League campaign, with the Red Devils bottom of the division after beginning the season with successive defeats.

After being priced out of a move to sign Antony from Ajax earlier in the window, a loan deal for Pulisic makes sense for a side in need of increased threat in the final third.

A loan move would allow United to concentrate the majority of their remaining budget on a defensive midfielder, a position which has been the focus for much of the summer.