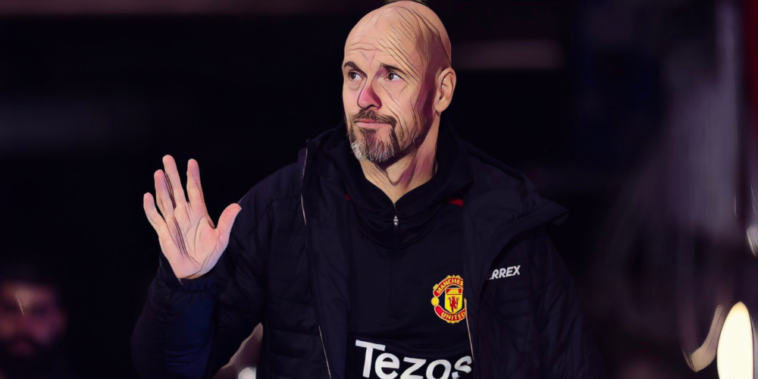 Erik ten Hag has had a testing time during the opening weeks of his reign at Manchester United, with the Red Devils having reached rock bottom.

United have began the campaign with back-to-back defeats and are bottom of the Premier League for the first time since August 1992, following a humiliating 4-0 loss Brentford last weekend.

United’s problems run right through the club from the very top to the bottom, but Ten Hag is not void of all blame with the Dutchman having already made mistakes at Old Trafford.

Harry Maguire’s status as club captain was questioned last season as the England international struggled for form and confidence.

After a strong start to his career with the Red Devils, Maguire has regressed with his performances in 2021/22 littered with errors.

The centre-back formed part of a defence that conceded 57 goals in the Premier League last season, the highest total of any side inside the top ten with the exception of Leicester (59).

Doubts also remain over Maguire’s ability to galvanise the rest of the squad and lift those around him, with United having shown a recent penchant for capitulation. Since the start of last season, the Red Devils have conceded 4+ goals on seven occasions in the Premier League, hinting at both a lack of quality and mental fragility.

Ten Hag chose to keep Maguire as captain, with none of David de Gea, Bruno Fernandes or an unsettled Cristiano Ronaldo deemed as better options to take the armband in a dressing room lacking leaders. That said, Maguire’s form over the last 12 months has not been good enough to merit a place in the starting side, let alone his status as captain.

Lack of due diligence on David de Gea

David de Gea came out and apologised following his performance in United’s battering at Brentford, with the Spaniard at fault for each of the opening two goals against the Bees.

Last season the 31-year-old was named as Manchester United Players’ Player of the Year for a fourth time, during a season in which the side’s defensive deficiencies allowed his shot-stopping credentials to flourish.

However, De Gea’s failure – or inability – to adapt to modern methods was evident last weekend. His poor pass into Christian Eriksen led to the second goal, with De Gea hesitant and awkward with the ball at his feet.

David de Gea asked to do the post-match interview after a horrible day for Manchester United 🔴 pic.twitter.com/uYD65ErbQP

European football’s best sides require sweeper-keepers with competence and composure in possession, traits De Gea lacks. His dated style has seen De Gea lose his place in the Spain squad and he is uncapped at international level since 2020.

Ten Hag’s desire to build from the back requires a goalkeeper with ability on the ball and his show of faith in De Gea backfired badly at Brentford. Kicking is not the only issue however, with the Spaniard reluctant to come off his line or claim high crosses. It has left United vulnerable at set-pieces.

Christian Eriksen was brought in to add invention to the Manchester United midfield, with the Dane’s availability on a free transfer a no-brainer given the club’s lack of options.

Eriksen excelled in an advanced role for Brentford last season and spent the entirety of his Premier League career stationed in positions high up the pitch. He began United’s opening weekend defeat to Brighton as a false nine, but just six days later found himself in an unfamiliar midfield role in front of the back four.

Ten Hag had hoped Eriksen’s technical ability would be enough to adapt to a more defensive position, as he looked to progress the ball from back to front. Fred and Scott McTominay lack the quality in possession to dictate games, but the gamble on Eriksen is another that backfired at Brentford.

The 30-year-old was overwhelmed by Brentford’s pressure in the 4-0 defeat in west London and was robbed of possession inside his own area for the second goal. A failed experiment which further emphasised, not that it was needed, that United must make midfield additions before the deadline.

Not realising that Lisandro Martinez would be targeted from day one

Lisandro Martinez became United’s marquee arrival of the summer window to date, with Ten Hag keen to reunite with a defender who was named as Ajax’s Player of the Season in 2021/22.

Despite his qualities, much has been made about Martinez’s lack of stature and the 5ft 9in centre-back has quickly been exposed to the rigours of the Premier League.

Brighton and Brentford each abandoned their usual policy of playing out from the back, operating for a more direct approach in a bid to take advantage of Martinez’s height.

The Argentine competed and won some duels, but it was notable that Brentford’s Ivan Toney – so effective with five aerial duels won and four chances created – continually pulled onto Martinez. The third goal also saw Martinez exposed, as he struggled with the strength of Ben Mee who nodded in from close range.

Jamie Carragher believes Lisandro Martinez is too small to play centre back in the Premier League 👀 pic.twitter.com/HAZjthSSTh

The lack of height in the visitor’s backline, alongside a reluctance from David de Gea to come for high crosses, made United vulnerable from set-pieces and caused panic in the penalty area.

Dutch football is based on technique and both Martinez and the similarly diminutive Tyrell Malacia will need to prove they can handle the physicality and athleticism of the Premier League. As each adapts to English football, clubs will continue to target a perceived weakness,

United’s poor recruitment has been well-documented, but this summer’s saga has reached a new level.

Frenkie de Jong has been the name that has dominated the transfer pages during the current window, but almost a month after reportedly agreeing an initial fee with Barcelona the club are no closer to securing a deal.

Ten Hag made De Jong his focus having worked alongside the midfielder at Ajax, with the Netherlands international viewed as the perfect playmaker to build his side around.

Differing reasons – varying from a reluctance to join United and complications over unpaid wages owed to De Jong from Barcelona – have been reported and have seen a deal reach an impasse. Fabrizio Romano revealed in his latest YouTube video that the Dutchman’s desire is to remain in Spain.

Xavi on de Jong deal: “No, Frenkie de Jong is not a substitute. I don't know what will happen with the market”. 🚨🔵🔴 #FCB

“I can guarantee that if he stays, he will be important for us”. pic.twitter.com/NxsBYFXZqt

“Both clubs are there, Chelsea and Man United are there and will be there unitl the end if Frenkie will change his mind,” Romano said.

“But nothing is changing on the clubs’ side until Frenkie changes his mind. And now, as I am speaking, Frenkie is still in the same position: he wants to stay at Barcelona.”

It is inconceivable that United have remained in pursuit without some form of hope being offered, but allowing the deal to drag on – without contingency plans having been identified – does not reflect well on the pulling power of either the club or Ten Hag.

Two weeks remain of the summer transfer window and the glaring weakness in this side has not been addressed.