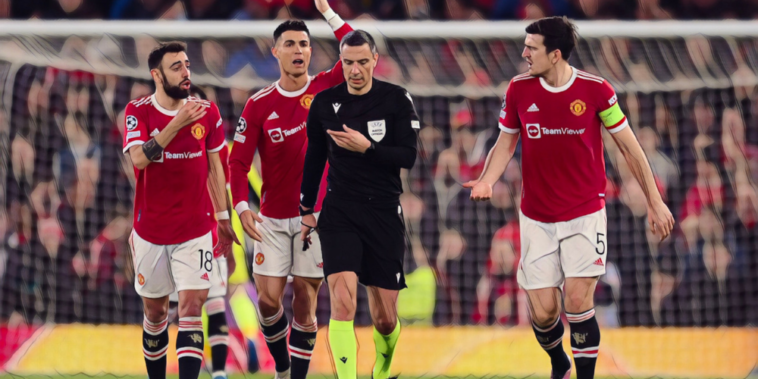 Ralf Rangnick has rued his side’s poor finishing and some ‘curious’ refereeing after Manchester United were dumped out of the Champions League.

United are out of the Champions League after a 1-0 defeat to Atletico Madrid at Old Trafford, with Renan Lodi’s far-post header securing the Spanish side’s place in the quarter-finals.

Rangnick’s side dominated possession for large periods and created more chances than the visitors, but were unable to find a way through the Atletico rearguard in a frustrating evening.

Jan Oblak impressed in goal for Atletico with fine saves from both Anthony Elanga and Raphael Varane and Rangnick voiced his frustration at a disappointing defeat.

The German was also critical of the performance from Slovenian official Slavko Vincic and pointed towards some ‘curious refereeing decisions’.

“I think we played a very good first half – exactly the way we wanted to play with a high energy level but we couldn’t convert that into one or two goals,” he told BT Sport.

“We had a few good moments where we should have scored but we didn’t. Conceding that counter-attacking goal just before half time didn’t make life any easier.

“It was hard in the second half and always interrupted. There was always somebody lying on the floor.

“I would also say some curious refereeing decisions. I wouldn’t say they were decisive but at least he fell too often for those time-wasting antics and four minutes at the end added on was a joke for me.”

Rangnick said he was pleased with the first-half performance from his side, but admitted the Red Devils struggled to find rhythm after the break against an Atletico side prepared to dig deep and disrupt to preserve their lead.

“Anyway, a very good first half and the second half was difficult to find the rhythm again,” he continued.

“We know they are good at defending leads. We had one or two moments in the second half and there was a brilliant save from the goalkeeper. We were fully aware that against this team you need to score the first goal yourself.

“That was a foul for sure on Anthony Elanga but the referee and the linesman didn’t see it that way. For me that was the only real moment, and the offside goal, that they scored with.

“Apart from that, we defended well and we were compact in their transition moments. There is nothing I can blame the team for in the first half.”

United’s focus now turns to catching Arsenal in the race for the Premier League’s top four and the Red Devils return to Premier League action against Leicester on April 2.